It’s been a slow month for fans of big AAA games, but don’t let that get you down. That just clears the way for you to dig into some smaller-scope games that won’t absorb 100-plus hours of your life. So if you’ve already finished playing the big recent titles like Overwatch and Doom, now is the perfect time to take a look at the games launching next week, many of which come from independent developers.

There’s a little something for everyone in the games launching next week, whether you’re into dungeon crawling, Mega Man-like platforming, or even doing virtual labor on a farm. Read on for all the information you need about the games launching the week of July 25, 2016.

Telltale Games has been making adventure games for years, with licenses ranging from The Walking Dead to Game of Thrones. While most of those games only have five episodes, the company’s take on Minecraft just keeps on going and going.

At this point in the story, a team of heroes led by Jesse (voiced by Patton Oswalt or Catherine Taber, depending on the gender selected) is traveling through portals in an attempt to get home. By happenstance they wind up in a realm controlled by a computer that’s so hellbent on maximizing efficiency that it has enslaved every living thing in the world. It’s up to you to lead your team as they try to keep safe from the world’s mind-controlled minions and they fight to free them.

Developer Heart Machine says this retro-style game is a love letter to The Legend of Zelda: A Link to the Past and Diablo. You control a “drifter,” who explores a broken world, looking for treasures left behind. With loads of enemies to vanquish and ruins to explore, Hyper Light Drifter has a good shot at being the gorgeous, addictive game it looks like in the trailer.

This game is set in a universe inspired by sci-fi stories from the ’70s. It takes place in a future in which humans have become immortal by transferring their consciousnesses into robotic bodies. The only problem is that a malicious artificial intelligence has enslaved them. You play as the last remaining fleshy human, but all that’s left of you is your head, which is kept alive in a flying helmet. So you travel through the game, attaching your head to the bodies of one robot after another to progress. Of all the games launching next week, this is by far the weirdest. Then again, it comes from Adult Swim, so what would you expect?

4. Shiren the Wanderer: The Tower of Fortune and the Dice of Fate 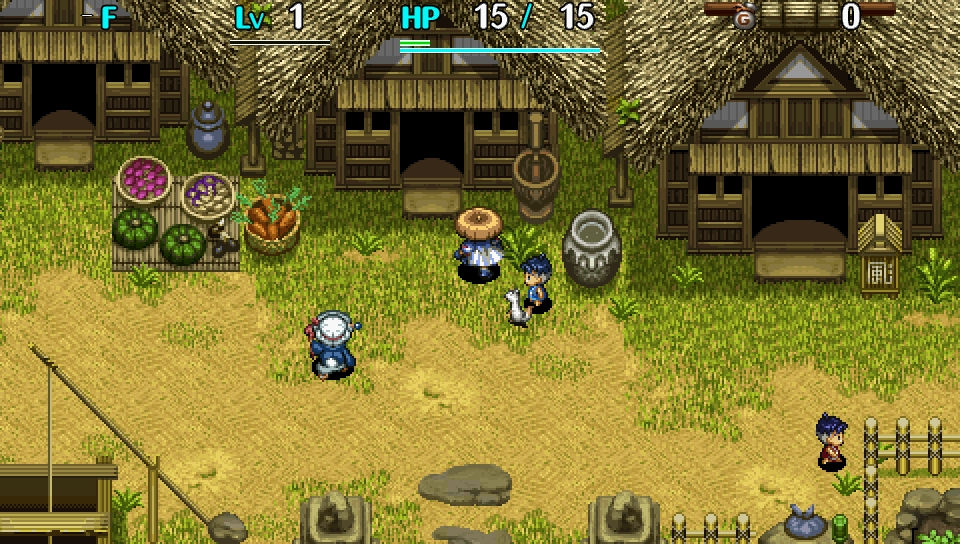 Its title might be a mouthful, but this retro-style “roguelike” game aims to offer some fairly simple gaming fun. There’s not much of a story here, but you take the titular character and his pet weasel into dungeons to slay monsters and collect loot. And because it’s a roguelike, when you die you’re dead for good, and you have to start over from scratch. This type of game isn’t everyone’s cup of tea, but exclusive Vita releases are few and far between these days, so we have to take what we can get.

If you grew up playing games like Mega Man and Contra, Mutant Mudds will be right up your alley. It’s a challenging side-scrolling game about a boy who needs to make tough jumps and shoot a variety of enemies to get from point A to point B. If you can collect all of the tokens in each level along the way, so much the better. It’s not a complicated game, but the enemies are inventive and the levels are brilliantly designed. Fans of retro gaming should check this one out.

Or perhaps you’d rather kick back and relax on a farm. In Stardew Valley you inherit your grandfather’s farm, so it’s your job to plant seeds, harvest crops, and make a home for yourself in a new town. You can build relationships with your neighbors and even get married if someone catches your eye — and you manage to woo them, which is not always easy. The game already came out on Windows to great reviews, so if you’re looking for a laid-back gameplay experience, it’s well worth your time.