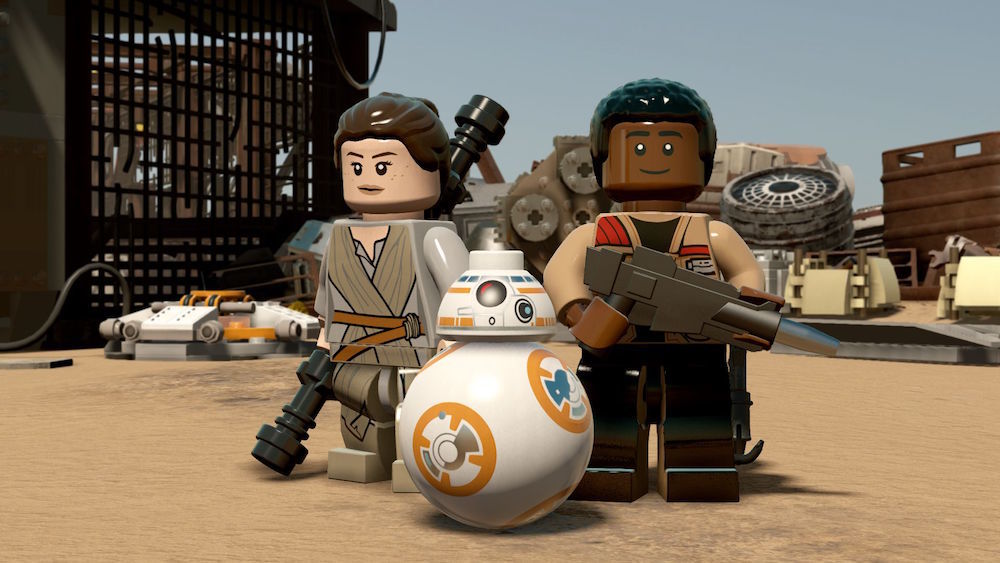 It’s a great time to be a gamer. In the past couple of months alone we’ve gotten a killer lineup of great games, including Overwatch, Doom, and Uncharted 4, just to name a few. But if you’re ready for something new, you’re in luck, because a whole new batch of fine-looking games is coming next week.

Next week’s video game releases offer something for everyone, whether you’re into epic sci-fi RPGs, unique simulation games, or taking control of Rey and Finn as they go on an adventure made of LEGOs. Read on for the scoop about all the biggest games launching the week of June 27, 2016.

In case you haven’t played any of the dozens of other LEGO games out there, here’s what you can expect from this one. You’ll get to explore a blocky version of the Star Wars galaxy, while blasting enemies, breaking things, and building things as you hit all the major plot points of Episode VII.

But because most other LEGO games are based on entire trilogies and tend to move through their stories at light speed, the developers promise a number of extra levels and other exclusive content in this one, including dogfights in space.

Capcom is cashing in once more on the fourth, fifth, and six installments of its popular horror franchise by releasing them (bafflingly, in reverse order) on the current generation of consoles. This week the fifth game is up, bringing protagonists Chris Redfield and Shiva Alomar to Africa to fight off the undead monstrosities. You can play the whole game in co-op mode, which is fun even if it saps some of the scares. Check this one out if you missed it the first go-round in 2009.

Arguably the best series of “visual novel” games kicked off with 999: 9 Hours, 9 Persons, 9 Doors on Nintendo DS. It tells the twisting (and twisted) story of a group of strangers who wake up to discover they’ve been kidnapped and are being held on a boat. They have to solve puzzles to escape, but only a few lucky ones will make it out alive. The 2012 sequel, Zero Escape: Virtue’s Last Reward, was even better, with a similarly demented story and a heap of user-friendly improvements that made it easier to see the game’s many possible endings before reaching the “true ending.”

This third and final installment has a new art style, but it promises to be every bit as harrowing. Early reviews are looking great, making it an easy recommendation. Just be sure to play the other two games first.

Prison Architect is a sim game, like SimCity or Civilization, which means your job is to create and maintain a fully functional prison. But as you might expect, running a prison comes with a unique set of challenges you don’t encounter in those other games. Prisoners will try to escape, viruses will sweep through the population, and everyone will complain about the quality of the food. In other words, it’s like other sim games, but it’s about running a prison. The game was well received when it launched on PC last year, so expect it to maintain its quality when it lands on consoles.

This long-running series of sci-fi action role-playing games continues with its fifth installment, which follows a group of heroes from the Pangalactic Federation as they try to bring peace to the universe. How do they do that? By fighting enemies, of course. This game takes place between the second and third installments, which came out in 1998 and 2001, respectively. So if you played them back them, I hope you have a good memory. Regardless, the real-time combat looks solid, so if you’re into Japanese RPGs, it may be worth checking out.

This sci-fi action RPG takes place on Mars, with you taking control of a technomancer, a warrior who can control electricity. On the dusty red planet, you’ll have plenty of enemies to go up against, from soldiers hired by the various corporations that have set up shop on Mars, to much scarier beasts that inhabit the planet. It looks like fun, but because the developer hasn’t proven itself capable of anything this ambitious in the past, it’s probably best to check the reviews before buying.

The atmospheric, monochromatic platformer Limbo helped breathe new life into the genre when it came out in 2010. Developer Playdead has been working on this similar but unrelated followup ever since.

Like its predecessor, the game takes place from a side-scrolling perspective, but here other people also populate the game world. But based on the haunting trailer, that doesn’t seem to make the game any more cheery. Despite the pall of gloom, you can expect to encounter plenty of environmental puzzles that will leave you scratching your head until you come up with a solution, at which point you’ll feel like a certified genius.

BoxBoy was an unlikely mini-hit on Nintendo 3DS when it launched early last year. It’s a download-only puzzle platfomer with rudimentary graphics, but a charming, square-shaped protagonist named Qbby. The idea is to figure out how to get past all manner of traps and spikes using four boxes you can send out from the hero in any direction. The twist this time is that Qbby can create two sets of boxes, which ought to up the ante on how complex the puzzles can get. This one’s only $5, so give it a download if it sounds interesting.