The latest trailer for the highly anticipated film adaptation of Gone Girl is here, and this one amps up the intensity with even more creepy insights than the first. The movie, directed by David Fincher and based off the bestselling book by Gillian Flynn, follows the story of Nick and Amy Dunne, a couple undergoing marriage struggles when Amy (Rosamund Pike) suddenly goes missing, leaving behind a trove of suspicious evidence that paints Nick (Ben Affleck) as the main suspect.

Viewers of the book got a closer look at that evidence on Monday in the second trailer, which shows more of Nick’s confusion and growing desperation as he struggles to escape suspicion from both the police and the public in the aftermath of his wife’s disappearance. The clip starts off by capturing his stunned face after a reporter asks him point-blank if he killed his wife during a live television segment. More scenes of the murder investigation, including close-ups of the crime scene and of notes left behind by Amy, are interspersed with flashbacks of the Dunnes’ marriage. Perhaps the most chilling, though, are the incriminating passages apparently lifted from pages of Amy’s diary and narrated aloud in the background in Pike’s haunting voice.

The trailer manages to be undeniably intriguing and suspenseful while still keeping important twists close to the film’s chest, maintaining just as many secrets as the characters featured in it. The end effect is sure to not only satisfy those who’ve read the book and are awaiting to see how the movie will play out, but also further intrigue those who haven’t picked up the novel — at least, not yet. 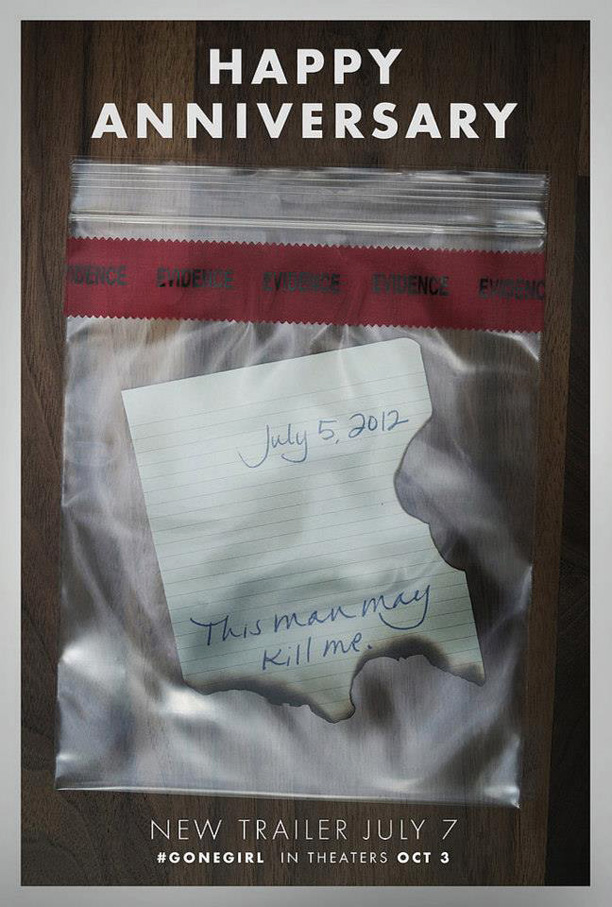 Adding to the thrill of it all? This latest peek at the movie gives audience members a look at a disturbing Neil Patrick Harris as Desi, Amy’s ex who keeps popping up throughout the investigation. It’s a role that’s starkly different from what the world is using to seeing him take on, but from the looks of the trailer, he has no problem embracing his creepy side.

The trailer was released on the heels of several promotional posters released by 20th Century Fox earlier on Monday morning. The posters show photos of more clues from the case of Amy’s disappearance, each showing a plastic bag holding a different piece of evidence, such as a snapshot of Amy and Nick seemingly on their wedding day, a pair of red, lacy underwear, and a note written by Amy that reads “This man may kill me.”

With the double whammy of the trailer and the disturbing promo posters, it’s clear 20th Century Fox is looking to heighten anticipation for the film, due out October 3, and it seems to be working. Fans are already buzzing about both on social media. But if readers think they already know every twist and turn, they may want to think again: Flynn, who adapted her book for the screen, reportedly came up with a completely new ending for the movie, which means everyone could be in for a big surprise.