Universal has unveiled a new trailer for Jurassic World, the highly anticipated fourth installment in the Jurassic Park film series that kicked off more than 20 years ago with the Steven Spielberg-directed original in 1993.

Like the previous films, the Colin Trevorrow-directed Jurassic World depicts a future when dinosaurs cloned from DNA are used for entertainment purposes at an island theme park. Unlike the original film that featured a newly constructed but still unopened theme park, Jurassic World shows a fully operational park open to the public. Of course, just because the park has been opened doesn’t mean that all the kinks have been ironed out at Jurassic World.

As revealed in the first trailer that was released in November, the major “kink” in the smooth operation of the park this time around is a gigantic, highly intelligent, genetically modified hybrid dinosaur. As Chris Pratt’s character presciently observes, creating that dinosaur was “probably not a good idea.” We get a better understanding of just how bad an idea that was in the latest trailer, which offers even more details about this homegrown dinosaur.

As you may recall, some of the scariest dinosaur antagonists featured in the original Jurassic Park movie were the diminutive yet highly intelligent and cunning velociraptors. Now, thanks to some ill-advised DNA tampering by the park’s geneticists, a new dinosaur dubbed “Indominus Rex” not only has super intelligence but a 40-foot-high physique to boot. According to a scientist in the trailer, this terrifying creature was created in order to boost attendance at the park, because apparently, in the future, being able to see live dinosaurs is not enough of a “wow” factor for people anymore.

In a reversal, it appears that the velociraptors that terrorized the characters in the first film may actually help the human characters in Jurassic World. As seen in the trailer above, Pratt’s character is shown commanding several velociraptors to “stand down” while a voiceover explains: “It’s not about control. It’s a relationship based on respect.” 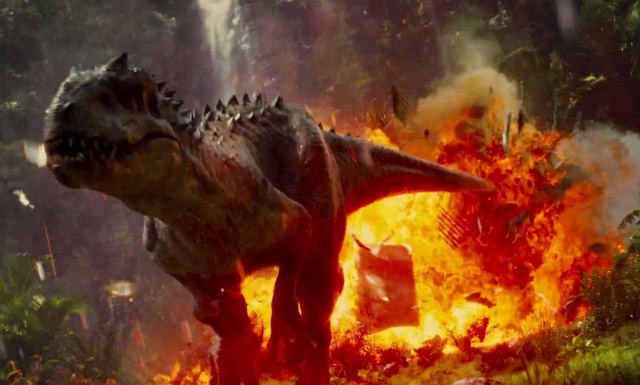 The extent of his character’s cooperative relationship with the velociraptors is further demonstrated when he is shown riding a motorcycle next to several of the creatures without any apparent fear of being killed and eaten.

Judging by the cunning demonstrated by Indominus Rex, the humans in Jurassic World are going to need all the help they can get. After eating its sibling and breaking out of containment, it is revealed that Indominus Rex is smart enough to remove a tracking device that the park implanted. The genetically modified dinosaur also seems to have a sadistic streak after it is shown to have slaughtered numerous other dinosaurs “for sport.”

Another notable takeaway from the new trailer is the appearance of various kinds of heavy weaponry. Besides showing some people battling (and mostly losing) against Indominus Rex with handheld machine guns, other scenes show a rocket launcher and a well-armed helicopter trying to kill the rampaging creature. Even worse, it is suggested that Indominus Rex is communicating with the other dinosaurs and organizing them.

Perhaps will we see some sort of Dawn of the Planet of the Apes-style dinosaur army? Yes, making that dinosaur was definitely a bad idea, at least for the employees and visitors at Jurassic World. On the other hand, for moviegoers who enjoy seeing a highly intelligent killing machine go toe-to-toe with humans armed with modern weaponry, genetically modifying that dinosaur DNA was definitely a good idea.