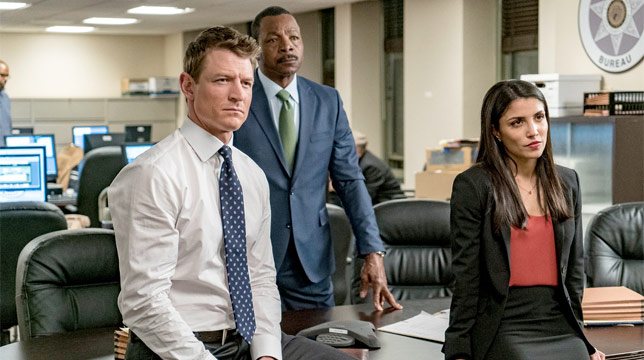 Audiences have a slew of new TV shows to look forward to in the coming month. Several highly anticipated comedies and dramas are set to make their debut over the next few weeks, including new originals from Hulu and the latest anthology drama from FX. Below, check out 10 series premieres to watch this March.

This four part Hulu drama follows aging comedian Paul Finchley (Robbie Coltrane), whose world is thrown into chaos when he is accused of sexually abusing a teenage girl 20 years previously. The series examines the fallout of the accusations and the impact on those closest to him, including his wife and troubled daughter.

NBC’s upcoming legal drama follows a team of prosecutors and investigators in the State Attorney’s office as they navigate their way through Chicago area politics, the legal arena, and media coverage. The show will star Carl Weathers as State’s Attorney Mark Jefferies, while Philip Winchester, Jon Seda, Monica Barbaro, and Joelle Carter round out the supporting cast. This will mark the fourth series in the network’s Chicago-set media franchise.

Ryan Murphy’s latest anthology series for FX will chronicle some of the most famous feuds in history. The first season will center on the battle between Joan Crawford and Bette Davis during the production of their 1962 film, What Ever Happened to Baby Jane?.

Jessica Lange and Susan Sarandon will star as Crawford and Davis, respectively, while Alfred Molina, Sarah Paulson, Stanley Tucci, and Judy Davis will co-star. Feud will be Murphy’s third anthology for the network, after American Horror Story and American Crime Story.

Fox’s freshman comedy stars Adam Pally as Dan, a nerdy computer science professor who stumbles across a device that allows him and his colleague (Yassir Lester) to travel back in time. With this device, the two can change the course of events from the past to improve their life in the present day — although it might come at a cost, especially when Dan becomes enamored with the daughter of an important historical figure.

Based on the book and film of the same name, this ABC period drama follows famed science fiction writer H.G. Wells as he is transported to modern day Manhattan in pursuit of Jack the Ripper. Once H.G. arrives in New York City, he finds a world he never thought possible and a young woman who captivates him.

Nicholas D’Agosto stars in this NBC comedy as a bright-eyed New York lawyer who heads to a tiny Southern town for his first big case: defending an eccentric poetry professor (John Lithgow) accused of the bizarre murder of his wife. Unfortunately, winning won’t be easy, especially when his client is always making himself look guilty. The cast also includes Jayma Mays, Sherri Shepherd, Steven Boyer, and Krysta Rodriguez.

Harry Potter’s Rupert Grint will executive produce and star in the upcoming Crackle show, Snatch. Adapted from the Guy Ritchie movie of the same name, the hour long drama will follow a group of 20-something, up and coming hustlers who stumble upon a truck load of stolen gold bullion and are suddenly thrust into the high-stakes world of organized crime.

Inspired by a real life heist in London, the show will star Grint alongside Dougray Scott, Ed Westwick, and Luke Pasqualino.

Fox’s 10-part event drama will delve into the aftermath of a racially charged shooting in a fictional town in North Carolina. As the network describes, the series aims to reflect the racial tensions and police shooting incidents that have spurred demonstrations and outrage across the country.

Hulu and ITV are teaming up for this eight-part drama, set against the backdrop of 18th century Georgian London. Based on the stories of real women, the series stars Samantha Morton as Margaret Wells, a woman who struggles to reconcile her roles as mother and brothel owner. When her business comes under attack from a rival madam, Margaret is determined to fight back, even if it means putting her family at risk.

ABC’s upcoming live-action/CGI hybrid fantasy series follows what happens when an imaginary being named Mary reappears in front of her now grown-up creator, Alice. The imaginary friend hopes to guide (or misguide) Alice, who is now a single public relations executive with feelings for a single father of three children.