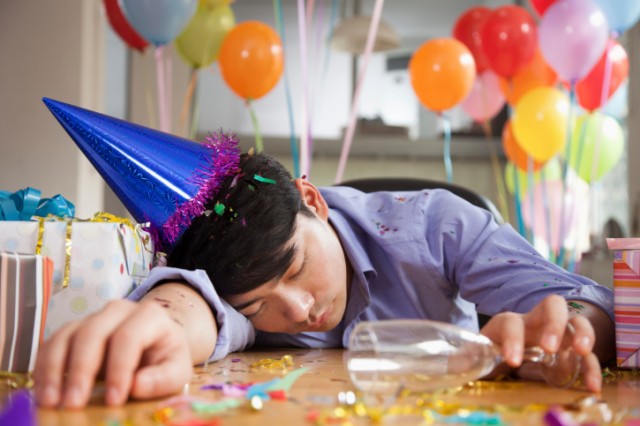 Man asleep after a party | Thinkstock

How will you be celebrating New Year’s Eve? If you’re like most people, you’ll probably find yourself wearing a funny hat and sipping champagne while you pretend to know the lyrics of “Auld Lang Syne” around midnight. Although there’s nothing wrong with bubbly alcoholic drinks and funny headwear, you can add some variety to your usual New Year’s Eve celebration this year by revisiting some of the many movies that feature stories about this annual party.

While there are probably hundreds, if not thousands, of films that have been made with plots that involve New Year’s Eve, we’ve whittled our list down to 10 movies in honor of the traditional pre-midnight countdown. Also, in the interest of keeping our movie list as diverse as possible, we have tried to include films from multiple genres, including horror, comedy, and drama. Here are 10 movies to help you ring in the New Year, in order of their critical ranking on Rotten Tomatoes.

Any problems you may have at your New Year’s Eve celebration will seem trivial in comparison to the problems that the protagonist in End of Days must overcome. In this horror film, Jericho Cane (Arnold Schwarzenegger) must prevent Satan from conceiving a child and precipitating the end of the world on New Year’s Eve 1999. Fortunately, Satan only gets a shot at this every thousand years so it will be a while before we see a sequel. The critics at Rotten Tomatoes gave End of Days a devilishly low approval rating of 11%.

What better way to ring in the New Year than with a film featuring members of “The Rat Pack”? In the film, Danny Ocean (Frank Sinatra) and Jimmy Foster (Peter Lawford) assemble a team that includes Anthony Bergdorf (Richard Conte), “Mushy” O’Connors (Joey Bishop), and Josh Howard (Sammy Davis, Jr.) for a robbery of several casinos in Las Vegas on New Year’s Eve. Ocean’s 11 was later remade by director Steven Soderbergh with an ensemble cast featuring George Clooney, Brad Pitt, Matt Damon, Don Cheadle, and other contemporary stars. However, the New Year’s Eve setting was replaced with a boxing match in the remake. Ocean’s 11 currently has a 48% approval rating from the critics at Rotten Tomatoes.

This Coen brothers-directed comedy about a naïve toy inventor who gets installed as the president of a large company has a memorable time-warping scene set on New Year’s Eve. The Hudsucker Proxy stars Tim Robbins, Jennifer Jason Leigh, Paul Newman, and Charles Durning. It currently has a 58% approval rating from the critics at Rotten Tomatoes.

Like End of Days, Strange Days takes place in the final days of 1999 as people are celebrating the arrival of a new millennium, as well as a new year. In the film, ex-cop Lenny Nero (Ralph Fiennes) sells content for an illegal entertainment system that allows users to directly experience other people’s memories and feelings. However, Nero’s illicit business soon gets him involved in a conspiracy that could get him killed. Strange Days was directed by Kathryn Bigelow and co-written by James Cameron and currently has a 63% approval rating from the critics at Rotten Tomatoes.

Before you decide to host your New Year’s Eve party on a boat, you may want to watch The Poseidon Adventure. In the film, New Year’s Eve revelers on a massive ocean liner called the SS Poseidon are unexpectedly forced to fight for their survival when the ship is capsized by a rogue wave. Directed by Ronald Neame, this big-budget disaster film features multiple stars, including Gene Hackman, Ernest Borgnine, Red Buttons, Carol Lynley, Shelley Winters, Roddy McDowall, Stella Stevens, Jack Albertson, Pamela Sue Martin, Arthur O’Connell, Eric Shea, and Leslie Nielsen. The Poseidon Adventure was a commercial and critical success and went on to earn two Academy Awards in 1973, including a Special Achievement Award for Visual Effects. The film currently has a 79% approval rating from the critics at Rotten Tomatoes.

Wealthy commodities broker Louis Winthorpe III (Dan Aykroyd) is forced to switch places with homeless street hustler Billy Ray Valentine (Eddie Murphy) as part of a social experiment being conducted by Winthorpe’s bosses. However, after discovering that they are subjects in an experiment, Winthorpe and Valentine devise a plan to get revenge that kicks off during a New Year’s Eve party on a train. Directed by John Landis (of Animal House fame), the classic ’80s comedy also stars Jamie Lee Curtis, Ralph Bellamy, Don Ameche, and Denholm Elliott. Trading Places currently has an 88% Certified Fresh rating from the critics at Rotten Tomatoes.

As a holiday that includes a tradition of kissing a loved one at the stroke of midnight, it should come as no surprise that there are many romance films that feature scenes set during New Year’s Eve parties. However, the Rob Reiner-directed romantic comedy film When Harry Met Sally… features some of the genre’s most memorable New Year’s Eve scenes, including a climactic scene between Harry Burns (Billy Crystal) and Sally Albright (Meg Ryan) at the end of the film. When Harry Met Sally… currently has an 88% Certified Fresh rating from the critics at Rotten Tomatoes.

This critically acclaimed film from renowned director Billy Wilder tells the tragic story of an aging silent-film star’s decline into insanity. In the film, deluded former movie star Norma Desmond (Gloria Swanson) enlists the help of failed screenwriter Joe Gillis (William Holden) in order to stage her comeback. In one of the film’s creepiest scenes, Norma throws a lavish New Year’s Eve party where Joe soon realizes that he’s the only guest. Sunset Boulevard is widely regarded as a masterpiece and won three Academy Awards in 1951, including one for Best Writing, Story and Screenplay. The film currently has a 98% Certified Fresh rating from the critics at Rotten Tomatoes.

Besides being almost unanimously acclaimed by the critics with a 99% Certified Fresh rating at Rotten Tomatoes, director Francis Ford Coppola’s follow-up to The Godfather also features one of the most memorable New Year’s Eve kisses ever shown onscreen. In the film, Michael Corleone (Al Pacino) comes to realize that his brother Fredo Corleone (John Cazale) has betrayed him. During a New Year’s Eve party in Havana, Cuba, Michael gives his brother a kiss and tells him, “I know it was you, Fredo. You broke my heart.” Yikes. Hopefully no one gives you the kiss of death at your New Year’s Eve party. Happy 2017!