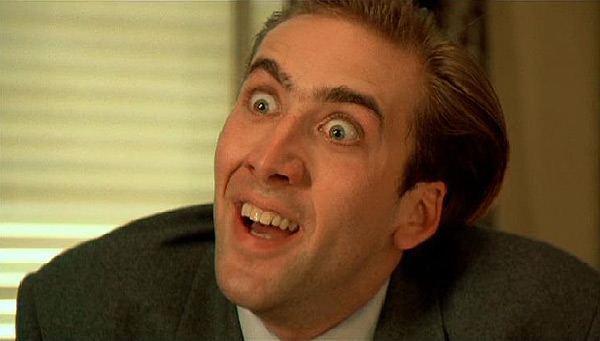 Kidnapped family, broken glass, ominous violins, stoic voiceover, man on the edge with nothing to lose: No, it’s not the newest Liam Neeson movie — it’s the newest Nicolas Cage movie.

In the trailer for his latest film, Cage dons his well-known, maniac-for-hire persona just weeks after his performance in David Gordon Green’s Joe earned the actor rave reviews. Cage, who seems to be in a constant duel with Neeson for most bad films on an award-winning actor’s resume, has had a wildly uneven career, with certifiably great performances in Leaving Las Vegas, Adaptation, Bad Lieutenant: Port of Call New Orleans, and the criminally underrated Bringing Out the Dead peppered among a strange slew of awful would-be blockbusters like Season of the Witch, Ghost Rider, Bangkok Dangerous, and Stolen.

The Dissolve’s Mike D’Angelo wrote a keen piece about the mythos of the Cage shtick: wild yelling, jarring fluctuations in tone, emphasizing seemingly random words and going bug-eyed, over-the-top crazy (Community parodied the Cage shtick this season, using the actor to reflect the randomness and meaninglessness of life).

Cage is often described as an actor who is capable of brilliance when he’s able to control the insanity percolating inside of him and allow it to manifest in his performance instead of just going off-the-wall nuts, but this isn’t really a fair evaluation of Cage’s acting prowess. Cage’s problem isn’t that he’s lazy or that he doesn’t control his fervor — it’s quite the opposite. He tries to turn every performance into a great performance, regardless of the film in which he’s appearing.

When he’s in an acrid hunk of junk, as he often is, he tries to elevate the material single-handedly by turning it up to 11. He isn’t awful, exactly, in the awful remake of The Wicker Man. It’s a miscalculation, his trying to compensate for the film’s inability to create or sustain a coherent tone or vibe. And, come on, let’s be real here: If you were allergic to bees and someone poured a whole hive into your face, you’d probably scream like a crazy person, too.

Cage’s newest film, Rage, looks an awful lot like Taken, Kidnapped, and every other bad action film that’s popped up like so many dandelions since Neeson decided being a serious actor was boring — so why not be a 50-year-old action star? Cage also has Left Behind, Outcast, and The Dying of the Light coming up this year, and each one of those looks like another hunk of junk. (Dying of the Light is being helmed by Paul Schrader, but Schrader’s entire legacy is rooted in Martin Scorsese turning Scharder’s squalid screenplays into modern tragedies, whereas Schrader’s directorial efforts are … well, just go watch The Canyons.)

Neeson and Cage make a weird pair, both misunderstood and decried for their veering away from “such promising careers,” and one can only hope that they one day face off in a film the way Cage and John Travolta faced off in Face/Off, John Woo’s implacably thrilling shoot-’em-up.

But whereas Cage’s career began with an eclectic array of colorful performances (Raising Arizona, Birdy, Peggy Sue Got Married, Wild At Heart), Neeson’s began with a monochrome pallet of  junk. Neeson became a star after Schindler’s List, and everyone forgot that he started his career doing pulp like Krull, The Delta Force, and Sam Raimi’s Darkman (still one of Neeson’s best roles). And yet his love for bad movies continues to surprise people. 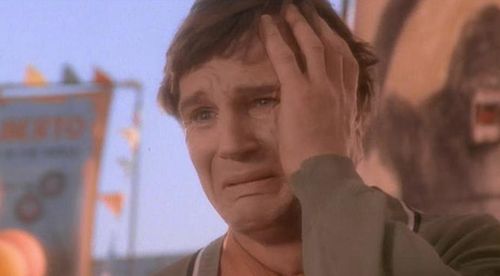 After Schindler’s List, Neeson was in exactly one really serious drama: Michael Collins. Then he went back to pulp, albeit big-budget pulp, with The Phantom Menace. A brief appearance in Gangs of New York and a really good turn in Kinsey make up the other two serious dramas in Neeson’s body of work. (A solid argument could be made for The Gray, but it would take another 1,000 words.)

The difference between Neeson and Cage is that Cage still tries to give great performances, and he sometimes succeeds; his problem is not being very picky with his scripts and spending all his money on castles, thus necessitating his need for myriad acting jobs. But even in the garbage to which Cage gravitates toward like the cockroach he eats in Vampire’s Kiss, he doesn’t phone in his performances: He shows up like a histrionic singing telegram man, bouquet and all.

Neeson, on the other hand, seems to enjoy shooting bad guys and having his family stolen, and just generally shooting from the hip. He’s slated to appear in two more films this year — one has the world “die” in the title, the other, “tombstone.” Next year he has Taken 3 and Run All Night, from the adrenaline junkie who gave you the recently released, recently forgotten Non-Stop.

We’ll all laugh with Neeson as he skips to the bank, gun in hand, another financially successful film on his resume. Cage will roar and rampage all over the screen in Rage and no one will go see it (Stolen didn’t even recover half of its $35 million at the box office; nor did Seeking Justice, with its $30 million budget), and everyone will laugh at him. But you better believe that Cage will be trying his hardest to roar and rampage with greatness.