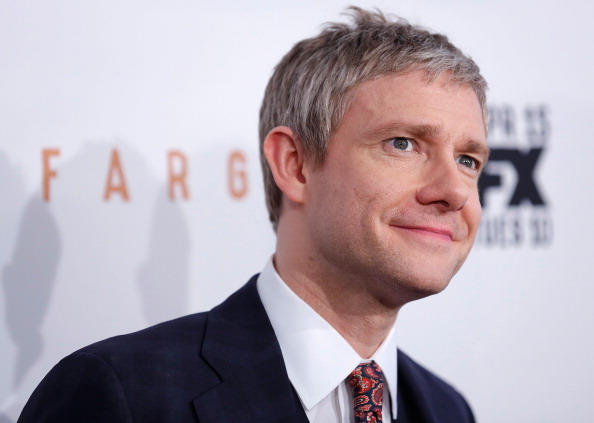 FX’s miniseries reinterpretation of the Coen brother’s 1996 cult classic Fargo has netted eighteen Emmy nominations, the most ever for a series from the network. The show’s two male leads, Martin Freeman and Billy Bob Thornton, will compete against each other for the award for outstanding lead actor in a miniseries or movie.

Freeman plays the inept insurance salesman Lester Nygaard, who is easily manipulated and gets dragged into the criminal plot of Thornton’s character, the hitman Lorne Malvo. The police force of the rural Minnesotan town of Bemidji where the show is set becomes suspicious of Nygaard and begin trailing him. Allison Tollman earned an Emmy nom for her portrayal of Officer Molly Solverson, as did Colin Hanks, who played Deputy Gus Grimly.

The show pays homage to the world created by the Coens in the film Fargo, as well as some of the bigger themes explored in the movie, such as how violence disrupts Midwestern everyday life. The characters and the plot, though, are completely different from the movie.

Reviews have said the show, which is produced by Joel and Ethan Coen themselves, has managed to catch the essence of the film without being a re-make and appeals to fans of the movie and the Coen brothers’ work in general. The show is written by Noah Hawley, who was also a writer for the popular drama Bones. Hawley created the show’s plot and new characters while staying in the Midwestern world created by the Coens. Hawley is also up for an Emmy for the show’s writing.

The English actor Freeman is also known for playing Doctor Watson on the most recent BBC adaptation of the endlessly adaptable Sherlock Holmes stories, but he smashes any good-guy type casting to pieces with his role as the emasculated psychopath Nygaard, a guy who empowers himself through violent acts including stapling a teen’s neck, having sex with one of his pseudo-victims’ wives, and getting second wife killed to save his own skin.

The fact that Freeman is also up for an Emmy for outstanding supporting actor in a miniseries for his role as Sherlock’s moral compass Doctor Watson speaks to the actor’s versatility. The BBC One announced earlier this year that Sherlock will see a fourth season, consisting of a Special and three new episodes of the cult favorite miniseries starring Benedict Cumberbatch as literature’s most famous detective.

Martin Freeman also plays another beloved character from literature, J.R.R. Tolkein’s Bilbo Baggins in Peter Jackson’s Hobbit films. The third and final film in the Hobbit series, The Hobbit: The Battle of the Five Armies, is currently in post production and is set to be released December 17.

One of the earliest roles that gained Freeman recognition was playing the nice-guy Tim on the British version of The Office. Watson is another nice guy, serving as Sherlock’s moral compass much of the time and providing the role of supportive friend. Freeman told The Guardian that the idea of  playing Nygaard was appealing because it would allow him to play someone nasty, completely different from the characters he’s been known for.

The publication asked if Fargo was an attractive project because it subverted the idea of Martin’s niceness, to which he responded: “Yes, I’m under no illusion about what I appear like. I just know there’s more to me than that as a person, and there’s certainly more to me than that as an actor. That’s where the frustration comes. My plan was always to be an actor. It wasn’t to be a nice guy. I became famous in Britain playing a nice decent guy and that casts a long shadow.”

Taking that risk has paid off for the actor, given the huge acclaim Fargo has gotten. It seems more likely that Thornton will take home the trophy if someone from Fargo is going to win for best actor in a miniseries, but for Martin it’s an honor just to be nominated for a psychopathic role rather than staying in his ‘nice guy’ niche.