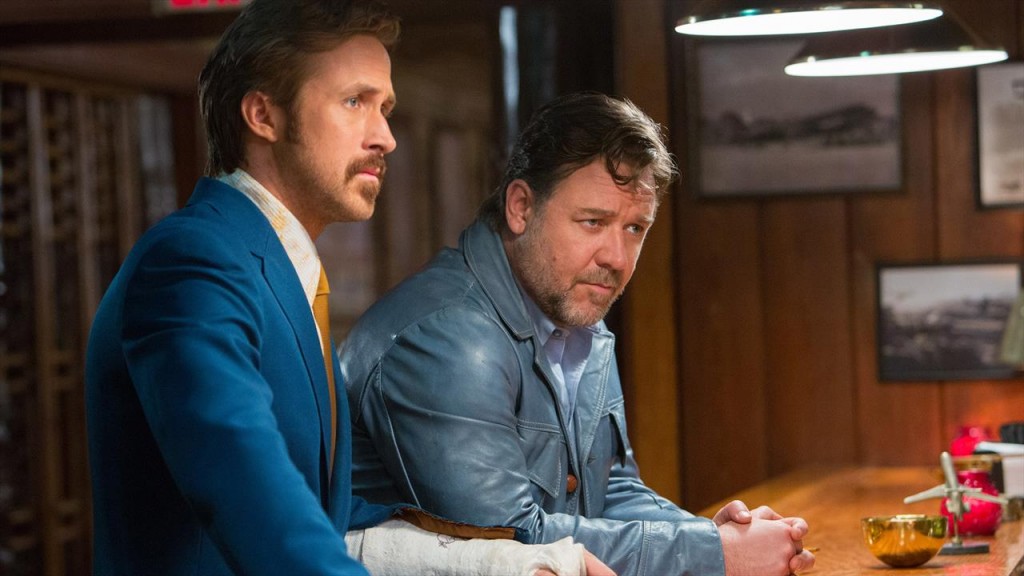 The buddy cop genre has taken something of a turn for the worst in recent years. The days of classics like Lethal Weapon, Bad Boys, and even Tango and Cash are long behind us, replaced by subpar offerings that offer nothing new or interesting to audiences. Rote, paint-by-numbers affairs like The Heat and anything Kevin Hart and Ice Cube do together are what make up the more modern offerings. All this is what makes The Nice Guys feel like a diamond in the rough. In a vacuum, it’s a perfectly adequate action/comedy. Measured up against its contemporaries in the genre though, it may as well be Citizen Kane.

The simple brilliance that sets The Nice Guys apart from lesser modern-day equivalents can be found in the way it borrows just enough from its own superior predecessors. This movie is essentially what happens when you throw Chinatown, Lethal Weapon, and just a splash of Pulp Fiction into a blender (which should come as no surprise, given that director Shane Black was the writer for the original Lethal Weapon screenplay). It carries that “gumshoe uncovering a conspiracy in Los Angeles” vibe of Roman Polanski’s 1974 classic, while still holding a distinctly modern appeal in its use of physical comedy. Rather than the simple slapstick and quipping of a movie like Ride Along (or Ride Along 2 for that matter), the visual gags and dialogue-centric jokes land in a way that doesn’t feel overly contrived or phoned in.

On its own, it’s also not a perfect move by any means. It gets confused with its tone at key junctures, marked by the frequent appearance of Holland March’s young daughter, and the relative difficulties March faces as a widower and single father. At times, The Nice Guys can’t seem to decide if it wants to be the inspirational story of a father and daughter’s healed relationship, or a madcap buddy cop action/comedy (especially when one of these themes would carry the film just fine). Still, these issues take a backseat to a solidly entertaining story, and stellar performances from both Russell Crowe and Ryan Gosling.

The chemistry between Crowe and Gosling especially drives the film, with Healey’s straight-edge no-frills approach playing off of March’s “borderline alcoholic yet surprisingly competent P.I.” just well enough to make their relationship believable. Unfortunately, that chemistry also leads to temptation for any studio, and that’s to franchise the whole damn thing out into a oblivion. The ending is more an elaborate and awkward setup for The Nice Guys 2, despite the film being better served by a closed-end story. Part of what’s killed the buddy cop genre today has been repetition (looking at you Lethal Weapons 2, 3, and 4), and leaving room for a whole franchise only stokes that flame.

That said, if The Nice Guys is what the future of buddy cop movies is going to be, at least we’ll be better off for it. We’ve gotten far too many sub-par offerings in that realm in recent years, and with the Jump Street series going off the deep-end with their Men In Black crossover, this could very well be the last bastion of decency the genre has to offer. Sequel or no sequel, Shane Black delivered us a movie plenty worthy of his Lethal Weapon pedigree. From here, we just have to hope that Hollywood doesn’t drive into the ground with future installments.