‘OITNB’ Star Will Jump to the Big Screen in ‘Southern Roots’ 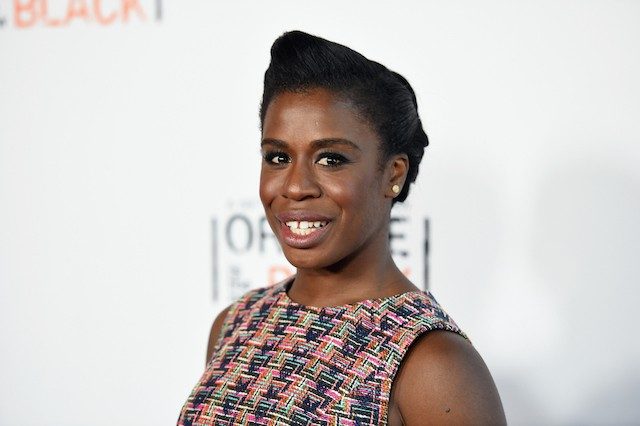 Uzo Aduba’s career has been on a fast rise in recent years, thanks to her award-winning turn in the critically acclaimed Netflix series Orange is the New Black, and now, the star has just booked another major role. Per Deadline, Aduba is set to lead the cast of the upcoming feature film, Showing Roots.

Set in 1977, the indie drama will follow the residents of a small South town, whose lives are turned upside-down when Roots, the miniseries adaptation of Alex Haley’s novel on slavery, hits the screen. According to Deadline, Aduba will co-star alongside Taken actress Maggie Grace. The actresses will play two frequenters of a local beauty parlor, who become inspired by the miniseries and join forces to try and integrate their community. Despite their efforts, the town’s pent-up racial tensions end up coming to the forefront and erupting in the process.

Directed by Michael Wilson (The Trip to Bountiful) and written by One Life to Live actress Susan Batten, filming for the movie is scheduled to begin this month in Baton Rouge, La. “I find that the subject matter has only gotten more relevant in this country,” Mailer said of the film, which is reportedly a passion project that he and Batten have been working on for several years now. “It’s a movie that deals with racial healing.”

It should come as no surprise that Aduba is expanding her career into film, given how much attention and critical praise she’s received for her turn of inmate Suzanne “Crazy Eyes” Warren. The actress’s portrayal has made her one of the biggest standouts on OITNB’s huge ensemble cast and turned her character into a fan favorite.

Aduba, who is set to reprise her role in the highly anticipated upcoming third season of the show, won the Primetime Emmy and the Critics’ Choice Television Award for Best Guest Actress in a Comedy series last year. This year, she’s also nabbed a Screen Actors Guild nomination for Outstanding Performance by a Female Actor in a Comedy Series. She earned her first ever Golden Globe nod as well, in the Best Supporting Actress category.

On the heels of such success, Aduba has had no problem finding roles outside of OITNB and making her way to the big screen. The actress already has another movie due out in 2015, aside from Showing Roots. She wrapped her first major film role, in the upcoming indie movie musical Pearly Gates earlier this summer. In that film, Abuda will take on an entirely different role, playing a receptionist who teams up with a cancer specialist to develop a retirement community. Aside from marking her first big screen role, Pearly Gates is also the first time that Aduba will show off her impressive vocal chops on screen. “Promise You,” a track the actress sings in the film, was released for free this past summer.

With a third season of OITNB on the way and a second movie now in the works, it’s clear Aduba will only continue to make a name for herself in the coming year. No release date for Showing Roots has been confirmed just yet.