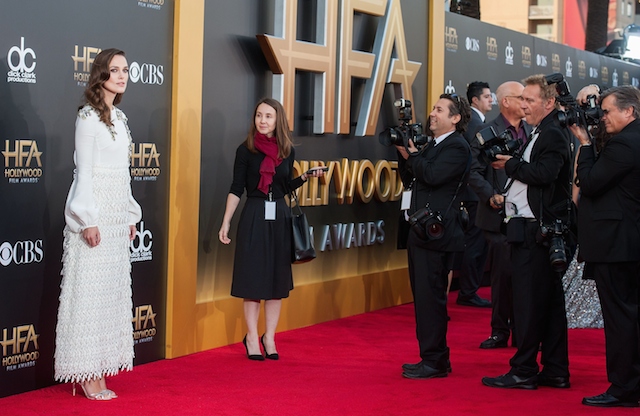 Hollywood awards season began on Friday night with a ceremony that you might not have heard of but that can be important for getting an early gauge on the coup de grâce of awards shows: the Oscars. The Hollywood Film Awards were broadcast on television for the first time this year, but they’ve always been a relevant indicator for figuring out early on which awards contenders are Hollywood’s favorites in a given year.

Queen Latifah hosted the 18th annual awards ceremony, which was shown on CBS, according to The Hollywood Reporter. “I know what all of you are thinking: ‘Did I miss the first 17 Hollywood Film Awards? Did I not set my DVR?’ ” Latifah told viewers. “Not many movie fans really knew about this show. That’s the problem when the event isn’t on television. But that changes tonight.” Latifah also noted that the awards are a well-known indicator of how things might play out at the Oscars.

While all of the contenders for the Academy Awards haven’t quite hit theaters yet, many of them are screening and were ready to compete for the Hollywood Film Awards. The biggest honor of the evening, the Hollywood Film Award, went to David Fincher’s Gone Girl. Star Ben Affleck accepted the prize and joked about the famous, controversial scene in which you may or may not be able to see his penis. The film also earned writer Gillian Flynn the Hollywood Screenwriter Award, which is a good sign in terms of her chances for winning the Oscar for best screenplay. Flynn wrote the novel from which the movie is based and said, “Thank you for believing that the author could write the screenplay.”

The Alan Turing biopic The Imitation Game was another big winner of the evening. Keira Knightley took home the Hollywood Supporting Actress Award for her role as Joan Clarke, Turing’s partner who aided him in code-breaking during WWII. “Particularly now, when women are such a minority in all fields, her story and the fact that she really perseveres, and she had space and time and grace is really inspiring,” Knightley said of Clarke.

Knightley’s co-star Benedict Cumberbatch won the Hollywood Actor Award for his portrayal of Alan Turing, a genius British computer programmer and mathematician who did crucial code-breaking work during WWII only to be prosecuted later in life for his homosexuality. That movie was pegged as a prime Oscar contender early on, and it looks like Knightley and Cumberbatch are strong Academy Award contenders for their performances. The movie’s director, Morten Tyldum, won the Hollywood Director Award.

Michael Keaton’s role in Birdman earned him the Hollywood Career Achievement Award, which could edge out Cumberbatch for the Oscar, especially since Keaton has never won an Oscar in his long career and critics have drooled over Birdman. Another biopic about a genius, The Theory of Everything, got Eddie Redmayne the award for breakout performance by an actor for his role as Stephen Hawking, which could also beat Cumberbatch’s Turing.

Julianne Moore could finally take home an Academy Award for her role as a linguistics professor with early onset Alzheimer’s in Still Alice, for which she won the Hollywood Actress Award. Other notable winners included the Hollywood Ensemble Award for Foxcatcher, the New Hollywood Award for Jack O’Connell from the upcoming Angelina Jolie-directed biopic Unbroken, and the Hollywood Comedy Film Award for Chris Rock’s Top Five. Those will all be prime Oscar contenders to watch as well as we move deeper into awards season.