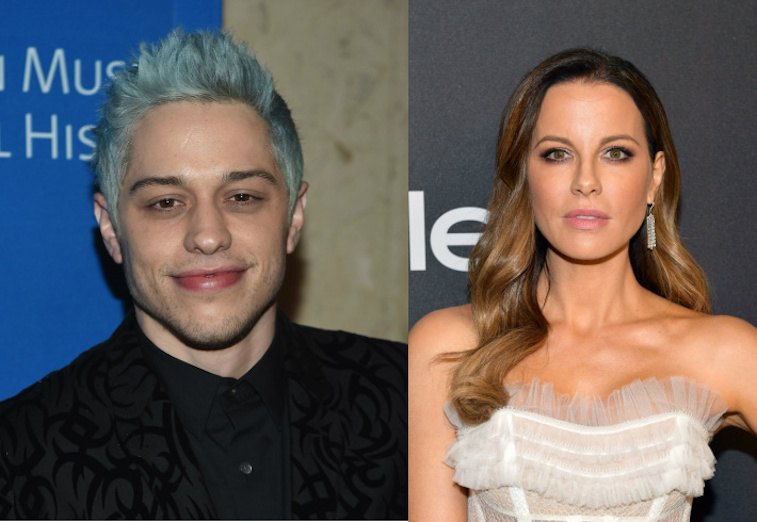 It looks like Pete Davidson is getting his flirt back on!

The SNL comedian was seen getting “very cozy” with actress Kate Beckinsale at The Golden Globe Awards After-Party.

The two were seen flirting back and forth the entire night and seemed to have really hit it off.

Does this mean Pete Davidson is finally ready to get back into dating?

Davidson arrived at the party with Machine Gun Kelly

Davidson and Beckinsale began talking and were seen standing very close on the dance floor. The comedian then made his exit from the party with Machine Gun Kelly just for a short while.

Pete Davidson and Machine Gun Kelly made their return to the after-party and of course, the comedian met back up with Kate Beckinsale!

According to a source, Davidson and Beckinsale made their way to an outdoor smoking patio to get away from all of the noise. The two sat closely on a couch and continued their conversation from earlier in the night.

They were seen getting “very cozy” and spent an hour talking.

“She was very flirty with him and there were definitely some vibes going on,” the source revealed. “Pete was smiling and laughing with her and she was all about him.”

Many of you are probably wondering if Davidson ditched his friend, Machine Gun Kelly, to talk to Kate Beckinsale?

Well, the rapper got acquainted with the actress’ friend while she and Davidson were hitting it off.

After their time spent talking, Davidson hugged Beckinsale then made his final exit from the party with Machine Gun Kelly.

Pete Davidson might not be ready to date again

It has yet to be revealed if Pete Davidson and Kate Beckinsale will meet up again in the near future.

No one would be opposed if the actually do.

After a very strenuous year, the comedian deserves to get back into the dating scene.

Just three months prior, Pete Davidson’s ex Ariana Grande called off their engagement after being together for a few short months.

Since going their separate ways, Davidson has had a hard time escaping the media. The comedian was receiving a ton of hate from Grande’s fans.

In December 2018, Davidson raised concern after he shared an Instagram post that insinuated he wanted to end his life.

Thankfully close friends and family of the comedian stepped in and made sure he did not follow through with that act.

Davidson has since been slowly jumping back into the dating scene and has been spotting going out on a few dates.

Sources have not revealed if Pete Davidson and Kate Beckinsale are planning on seeing each other again.

She has been said to have a thing for comedians so let’s hope we’ll see more of her and Davidson together in the near future!