At the age of 47, Peter Dinklage is enjoying some of the most successful years in his acting career. That usually happens when you find yourself not only a lead actor in one of the most popular shows on television, Game of Thrones, but also one of its most popular characters. His role as Tyrion Lannister has quickly seeped into pop culture with a trademark wit and sarcasm while also receiving universal critical acclaim. To date, Game of Thrones has earned him five Emmy nominations for “Outstanding Supporting Actor in a Drama Series,” winning twice in 2011 and 2015.

But while Game of Thrones has elevated Dinklage to the attention of the masses, the diverse actor has overseen a strong career dating back 20 years. It is a career that has included movies, television, and theater, all of which he’s done on a consistent basis throughout. So if you’ve found yourself a fan of Dinklage and his performance in Game of Thrones, here are 10 of his best movies you should definitely check out.

The 2014 biopic Low Down revolves around famous jazz pianist Joe Albany (John Hawkes) from the perspective of his young daughter Amy-Jo Albany (Elle Fanning), whose memoir serves as the basis and who also co-wrote the screenplay. Dinklage has a small but memorable role in the film as Alaine — a fellow resident of the flophouse where Amy’s father lives, and one whose occupation further leads Amy away from her childhood innocence. While the film earned mixed reviews from critics, it’s definitely worth a watch for anyone vaguely interested in the subject manner and the framing of it through a young girl’s eyes.

9. The Chronicles of Narnia: Prince Caspian

The Chronicles of Narnia: Prince Caspian is the second film adapted from C.S. Lewis’s fantasy series and follows the four Pevensie children as they return to Narnia one year after their adventures in The Lion, the Witch and the Wardrobe, but with 1,300 years having passed there. Dinklage plays the role of sardonic red dwarf Trumpkin who in many ways shares the same qualities he would later take on in Game of Thrones as Tyrion. 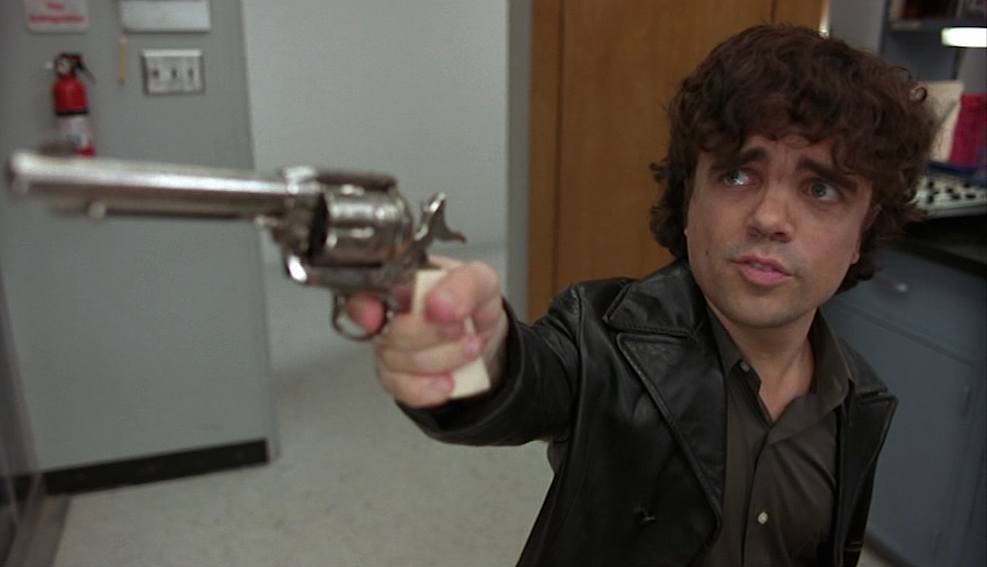 Human Nature is an often forgotten film, but one that’s definitely worth watching. The film is the second filmed screenplay by Charlie Kaufman and represents the directional debut of Michel Gondry (the pair would team-up for Eternal Sunshine of the Spotless Mind several years later). In typical Kaufman, absurdist fashion, Human Nature follows the antics of a scientist and a naturalist after they discover a man born and raised in the wilderness and introduce him to the ways of society.

One of the final films from legendary director Sidney Lumet, Find Me Guilty is based on the true story of the longest Mafia trial in history when Giacomo “Jackie” DiNorscio (Vin Diesel) not only decided to stand trial rather than rat out his associates, but also defend himself. Dinklage stars as defense attorney Ben Klandis who after seeing Jackie’s antics as his own lawyer begins to believe he can sway the jury.

Elf is a Christmas-comedy film from director Jon Favreau that has already attained classic status as a go-to Christmas film. The film tells the story of an elf named Buddy (Will Ferrell) who, after finding out that he is not actually a North Pole elf, travels to New York to find his parents and experience life as a human. But Dinklage is a scene-stealer as the angry, best-selling children’s author Miles Finch who finds himself in a physical altercation with Buddy when he mistakes Finch for an elf.

The best film in the X-Men series, X-Men: Days of Future Past sees the X-Men battling the Sentinels in two timelines as they attempt to stop the future desolation from ever occurring. In this case, all the future’s woes are caused by Dinklage’s Dr. Boliver Trusk who has created the Sentinels from experimenting on mutants.

The low-budget independent comedy Living in Oblivion is Dinklage’s debut role and also happens to be one of his best films. The film follows the making of a low-budget movie with all kinds of problems, real and imagined. Dinklage plays Tito, one of the film’s actors who constantly bemoans the kinds of roles he’s offered as a dwarf.

Death at a Funeral | Source: MGM

Dinklage starred in both the original Death at a Funeral and the remake, but go ahead and ignore the remake and go straight for the original British film. The dark comedy from Frank Oz revolves around a family attempting to resolve a host of issues between one another during their father’s funeral, which leads to everything from drug-taking, fighting, and corpse defilement. And the main culprit for the film’s escalation is Dinklage’s American character Peter, who arrives unannounced and soon finds himself at the center of a blackmail scheme.

It may sound strange, but the little-seen 2005 British adaptation of Lassie is actually one of the best-reviewed films of Dinklage’s career even if the film didn’t exactly take off at the box office. An adaptation of the 1940 novel Lassie Come-Home by Eric Knight, the film follows the adventures of Lassie after he is sold to feed the family and attempts to travel back to them. Dinklage features in just one of Lassie’s many escapades as a puppeteer.

Despite having many small roles in his early career, it wasn’t until The Station Agent that Dinklage gained worldwide acclaim as the kind of actor who could carry a film. The film stars Dinklage as Finbar McBride — a withdrawn man with a love for trains and who feels shunned for being a dwarf. But when his only friend dies unexpectedly, he moves to an abandoned train station to live in solitude where he encounters two other similarly lost people. A wonderfully sweet and melancholic film about adrift people connecting with others, the film will likely go down as Dinklage’s tour de force even as Game of Thrones threatens to cast a huge shadow.