PewDiePie’s Net Worth: This is How Much the YouTube Star Makes Per Video

Felix Kjellberg is still the most-subscribed YouTube star on the popular video platform. Once a gaming channel and now essentially its own brand putting out a variety of content seven days a week, PewDiePie has over 70 million subscribers and has made millions off his videos in the past eight years.

These days, it’s common for “YouTubers” — people who make videos on YouTube for a living — to have more than one stream of sustainable income. Like other online creators, they rely on advertising, brand deals, affiliate marketing, and more to offset the costs of producing high-quality content — and of course, paying their bills.

Here’s how much PewDiePie is worth, how Kjellberg earns most of his money in a given year, and what that might look like on a per-video basis.

PewDiePie’s channel on YouTube has slightly over 73,400,000 and climbing. His channel is the first to have reached this record-breaking number, but he could one day lose his unofficial title — possibly sooner rather than later.

YouTube channels PewDiePie and T-Series went head-to-head near the end of 2018, the latter desperately trying to surpass the former in subscriber count and take over the title of Most Subscribed Channel on the platform. As of December 3, 2018, Kjellberg still holds the top spot.

PewDiePie net worth and how he makes his money

According to Celebrity Net Worth, Kjellberg is worth an estimated $20 million.

Surprisingly, not all of the YouTube celebrity’s money comes directly from ads on the YouTube platform — though he does still reportedly make a significant amount annually from his YouTube partnership.

Like many larger channels — which often become their own brands within the expanse of the platform — Kjellberg sells merchandise (T-shirts, accessories, etc.) which generate income and are distributed as separate entities from YouTube itself.

The PewDiePie brand is also big enough for him to also generate significant income from common sources in the industry such as affiliate marketing and brand deals (promoting a product by a specific company or brand in exchange for funds).

Kjellberg has also established several more “traditional” income streams since surpassing 1 million subscribers back in 2012. He released a book in 2015, This Book Loves You, and has released several mobile and console games such as Tuber Simulator, a mobile simulation game allowing players to create and grow their own fictional YouTube channels. 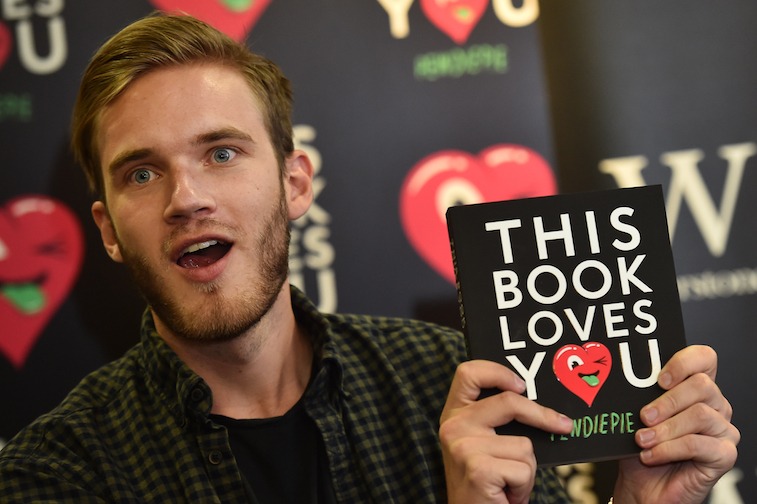 Some sources estimate that, based on an average earning of $2 per 1,000 views, he could make as much as $20,000 or more per video. This of course depends on view count — a video that gets only 1 million lifetime views would only generate $2,000. Overall, his view counts per video vary, but many are in the millions.

His most popular video has now topped 84 million views.

Looking at YouTube revenue alone, Kjellberg isn’t actually the top earner on YouTube. That title still belongs to Ryan ToysReview, a popular channel featuring a seven-year-old who — yep — posts videos in which he reviews toys.

Kjellberg started out playing video games for a living — now a career path many aspiring gamers more realistically strive for, though it wasn’t then. Now he has created a sustainable brand that has allowed him to branch out into other mediums and forms of content while still earning millions.