Pippa Middleton is more than just the sister of the Duchess of Cambridge (though that’s a pretty impressive title) — she’s become a fashion icon. Ever since Princess Kate and Prince William’s wedding in 2011, the whole world has been keeping a close eye on her outfit choices. Though her style has evolved over the past six years, she delivers time and time again with elegant, yet effortlessly cool ensembles.

Let’s take a look at 15 of our favorite Middleton fashion choices from 2011 to now — including what she wore to her own wedding! 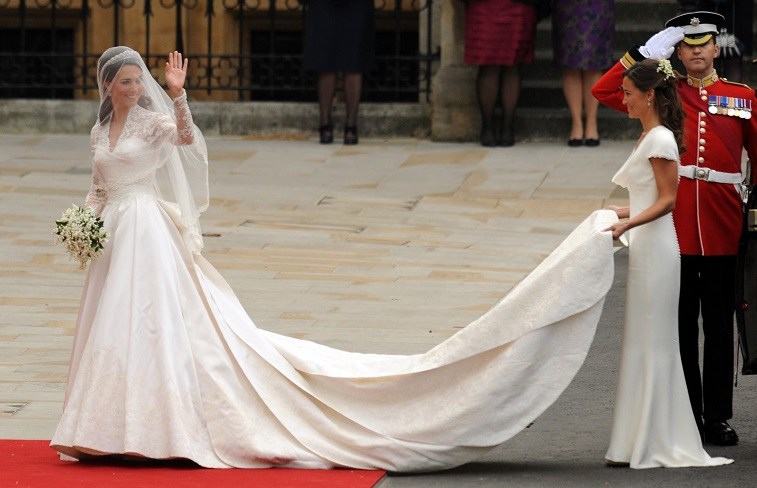 Stealing the show at a royal wedding isn’t something that seems particularly possible. As a grand event and potentially one of the most significant weddings of the century, anything but the prince and the new Duchess of Cambridge would seem of little importance. However, Maid of Honor Pippa Middleton was the center of attention while carrying the train of sister Kate’s wedding gown into Westminster Abbey on April 29, 2011.

Kate’s little sister’s dress was a showstopper — and no one could stop talking about it. Its ivory color wasn’t even the focal point, as it’s not unheard of for the maid of honor to wear white in a royal wedding. What had people talking was the view of her dress from behind. Her body looked stunning in the form-fitting dress, hitting her in all the right places. And so her path as a fashion icon began. 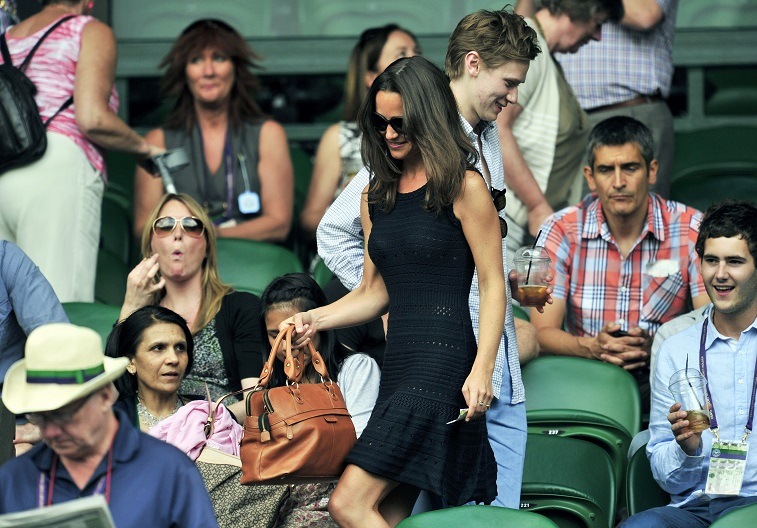 In July 2011, just a few months after her sister’s wedding, Middleton attended the Wimbledon Tennis Championships in southwest London. She looked chic while showing off her toned arms, wearing this black dress with knit details. She stays neutral by choosing a cognac handbag and looks spectator-ready in oversized sunnies.

Kate and Pippa Middleton on day 13 of the 2012 Wimbledon Championships tennis tournament at the All England Tennis Club on July 8, 2012. | LEON NEAL/AFP/GettyImages

Fast forward to one year later, and Middleton once again looks stunning at the Wimbledon Tennis Championships in July 2012. This time, she opted for a more feminine look in a powder blue graphic dress while seated in the royal box. The peplum detail was huge in 2012, but we can’t deny that she would still look trendy wearing this in 2017.

Middleton accessorized the look with a matching powder blue handbag. She and sister Kate wore pretty much identical hairstyles, making them look closer to twins as opposed to their nearly two-year age difference.

Pippa Middleton at a 2012 US Open women’s singles match at the USTA Billie Jean King National Tennis Center in New York on September 4, 2012. | TIMOTHY A. CLARY/AFP/GettyImages

As a guest of Roger Federer, Middleton attended the 2012 U.S. Open in serious style. Her Paper London color-blocked dress had a sporty, yet preppy look to it with a collar and button details. Her woven handbag by Kate Spade, wooden Finlay & Co. sunglasses, and nude wedges gave the overall ensemble more of a laidback feel.

Middleton continues to look fabulous while spectating events, no matter the weather. In March 2013, Middleton bundled up in a yellow Katherine Hooker London Tori coat while watching the races at the Cheltenham Festival. She (literally) topped off the look with a Cossack fur hat and matched it with brown tights and suede boots.

Leave it to Middleton to have all eyes on her at another wedding. This time, she was the center of attention because she attended the Sept. 2013 wedding of James Meade and Lady Laura Marsham with Prince William and Prince Harry, but without the Duchess of Cambridge or Harry’s (now ex) girlfriend, Cressida Bonas.

Middleton was all smiles as she donned this beautiful teal ensemble by Tabitha Webb. Her dress was lacy with a subtle geometric design. She matched her pumps and hat to the dress, but our favorite detail is the peacock feather finishing it off. 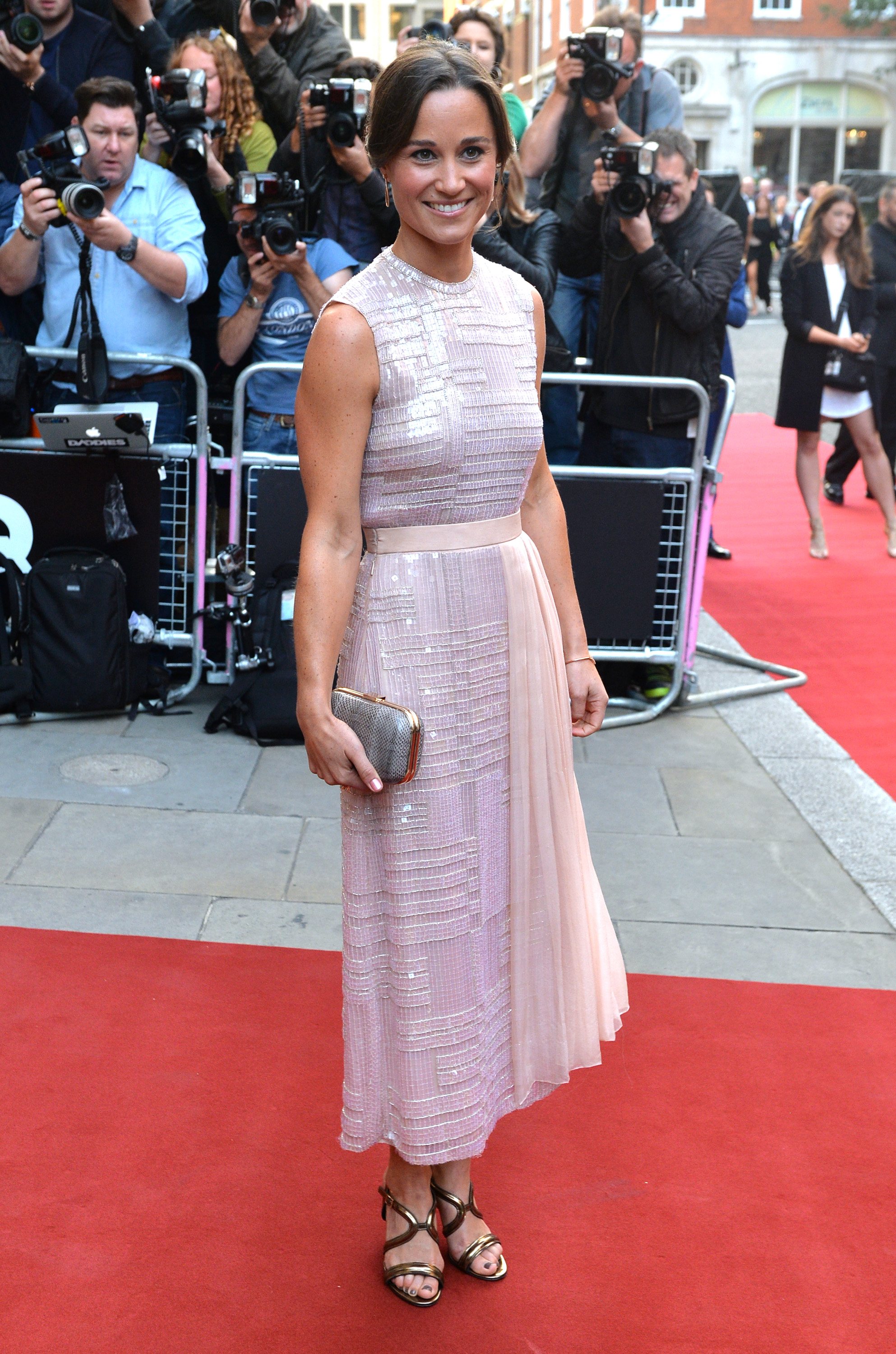 Pippa Middleton attends the GQ Men of the Year awards at The Royal Opera House on September 2, 2014 in London, England. | Anthony Harvey/Getty Images

Looking like the embodiment of elegance at the 2014 GQ Men of the Year Awards, Middleton took to the red carpet in this blush pink ensemble in early September. She paired together the matching silk top and skirt from the Hugo Boss spring/winter 2014 collection. Pulling her hair back gave the look more of a graceful touch and let the outfit speak for itself. She finishes the look with bronze heels, which brought out the metallic detail of the top and skirt combo. 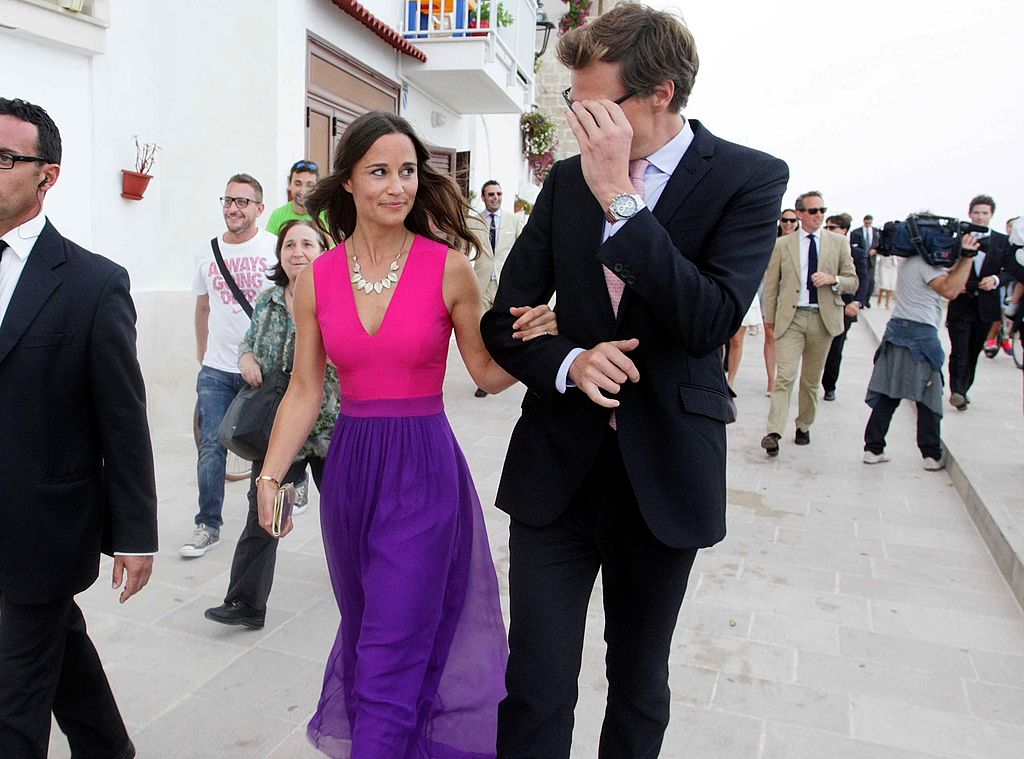 Middleton’s (now ex) boyfriend, Nico Jackson, couldn’t keep his eyes off of her in this look. She wore this stunning fuschia and purple Tabitha Webb maxi dress to the wedding of her other ex, Charlie Gilkes, as he married Anneke von Trotha Taylor in Sept. 2014. The dress was paired perfectly with a metallic statement necklace, bracelet, and clutch. 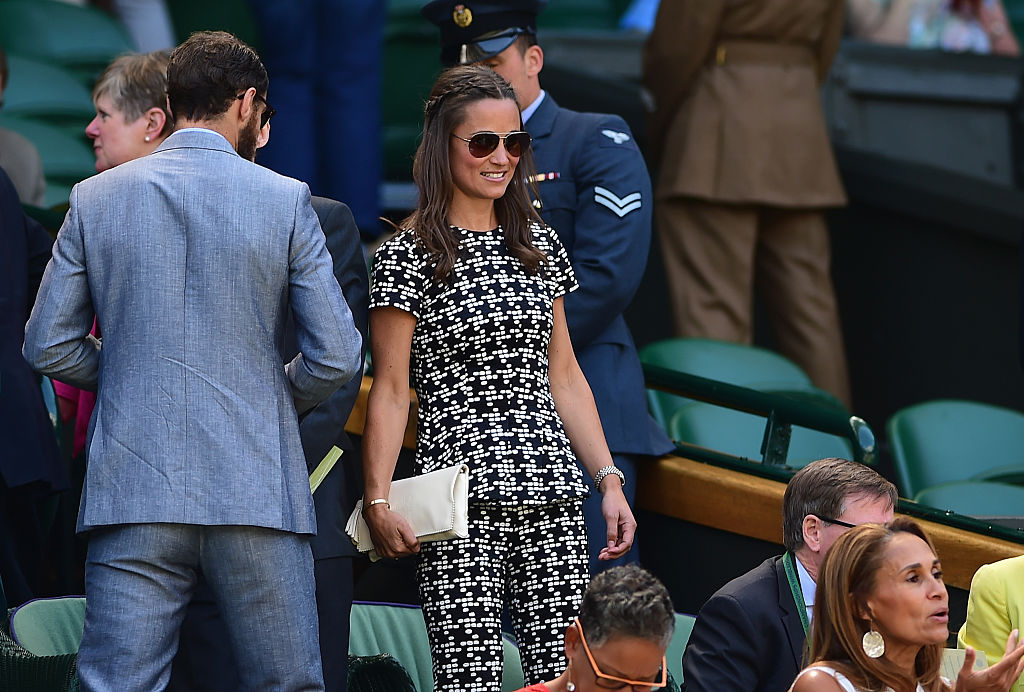 Pippa Middleton during day ten of the Wimbledon Lawn Tennis Championships at the All England Lawn Tennis and Croquet Club on July 9, 2015 in London, England. | Shaun Botterill/Getty Images

This look is definitely one of our all-time favorites. Middleton looks so effortlessly cool in these black and white separates by Carolina Herrera at the Wimbledon Tennis Championships in July 2015. She once again goes for the peplum shape on top, and we love it paired with her perfectly fitted pants.

What really makes this look work is the way she accessorized. She went with aviator sunnies, a white clutch, and summery black wedges. The braids in her hair make it clear that she was going for a fun, yet chic style for the event. 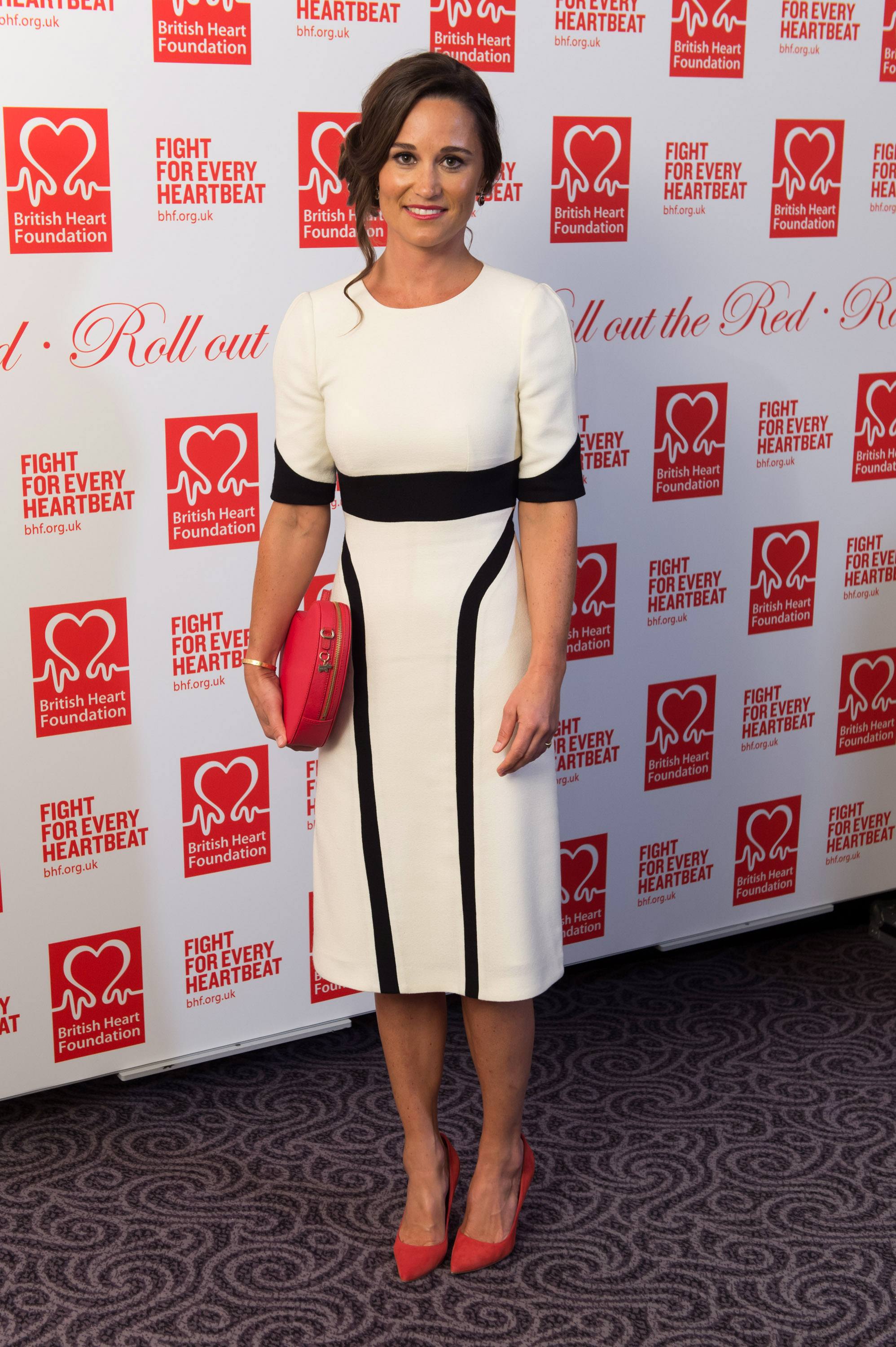 We have serious heart eyes for Middleton in this photo, and it’s not just because she’s holding a heart-shaped bag! As an ambassador for the British Heart Foundation, Middleton attended the “Roll Out the Red Ball” fundraising event on Feb. 11, 2016, with which she helped raise $275,000 in charity.

She looked glamorous while working for a cause in this black and white Tabitha Webb dress. She sticks with the red theme by appropriately matching her stilettos and lipstick to her bag, just a few days before Valentine’s Day. 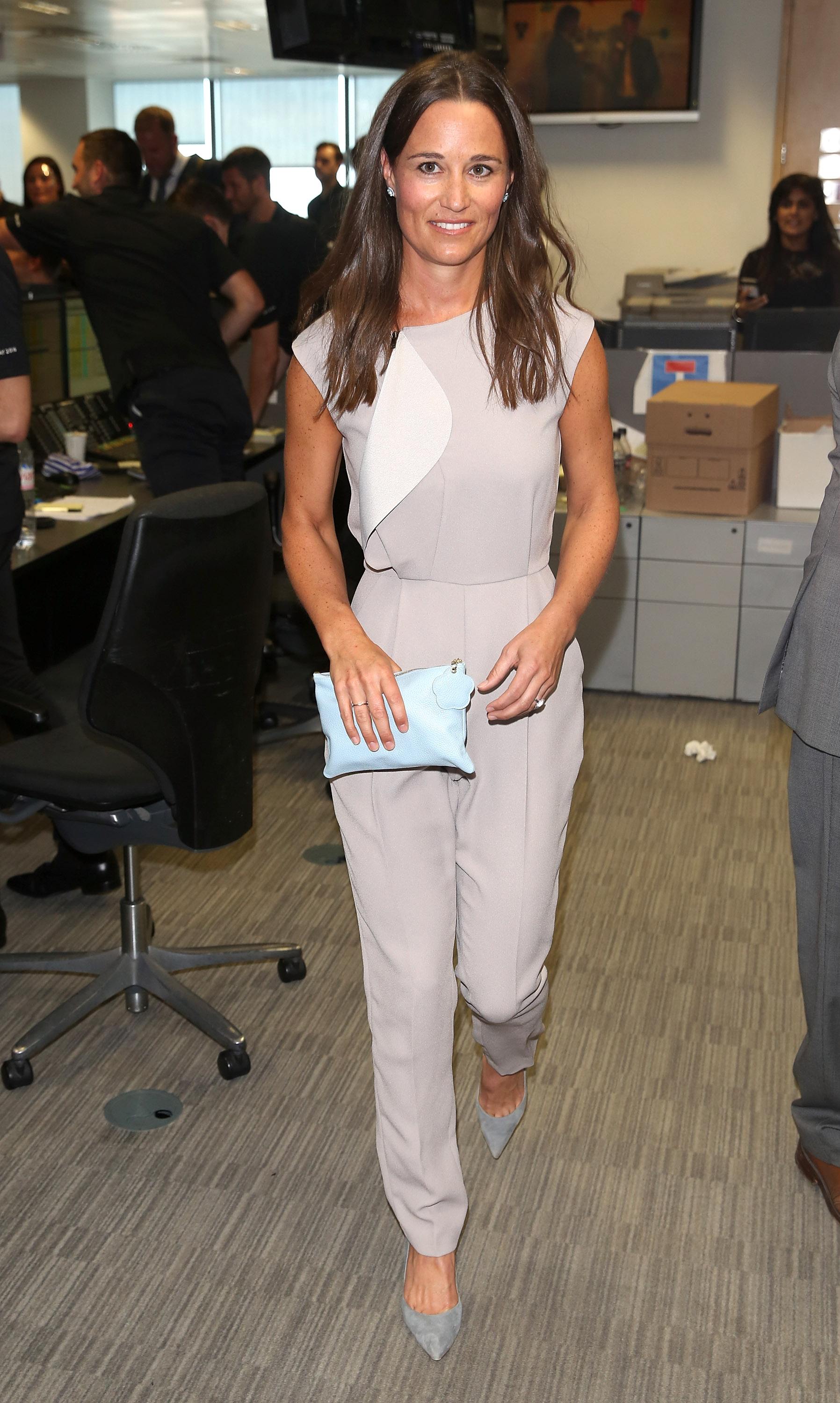 Middleton rocked this neutral look at the Sept. 2016 BGC Annual Global Charity Day event. This Reiss jumpsuit looked casual chic, but her matching gray heels and light blue clutch bumped it up a notch on the glamour charts. Speaking of glamour, you may also notice some new bling on her finger, as she got engaged to her now-husband, James Matthews, in July 2016. 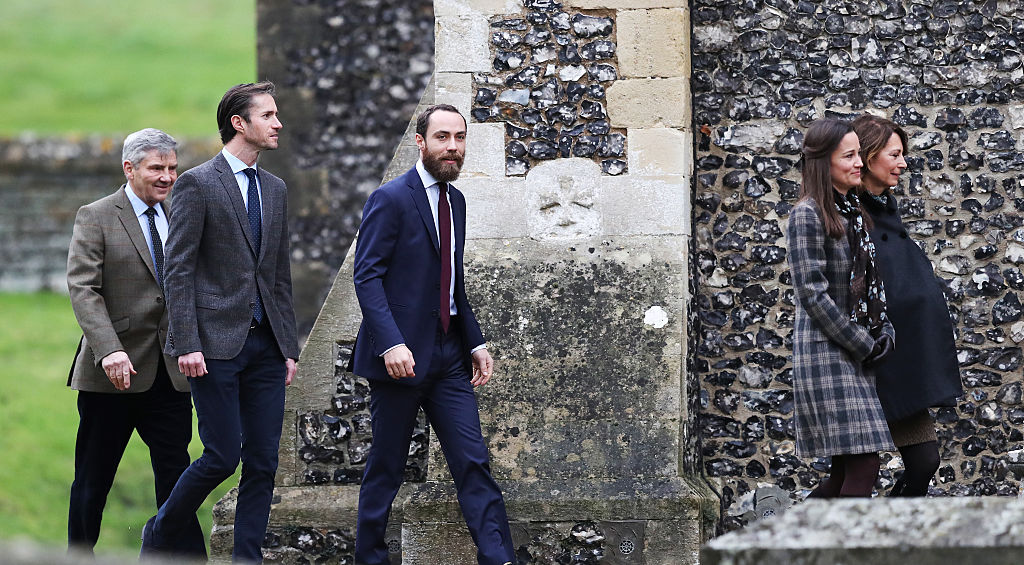 Middleton looked fit for the holidays in this ensemble for church on Christmas Day in 2016. We can’t say we’ve seen anyone pull off an all-brown outfit so well, but Middleton does it in a classy way. The attention-grabber of the look is her plaid jacket, which she paired with brown tights, boots, gloves, and a floral scarf.

Some speculated that Middleton and Matthews used this visit to St. Mark’s Church as an opportunity to scope out the church for their wedding venue, which did end up being where they got married in Englefield, England. 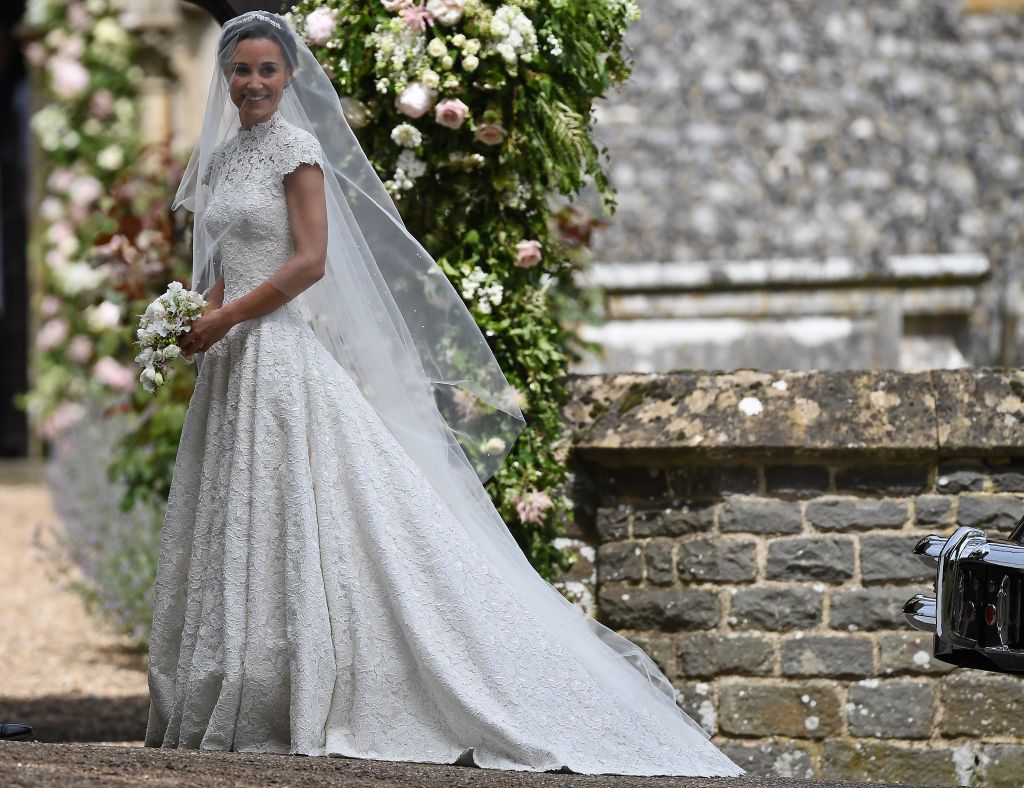 Pippa Middleton arrives for her wedding to James Matthews at St Mark’s Church in Englefield, west of London, on May 20, 2017. | JUSTIN TALLIS/AFP/Getty Images

Even though Middleton will always be known for her attention-stealing moment at her sister’s wedding, she transitioned from bridesmaid to bride on May 20, 2017. The new Mrs. Matthews absolutely glowed on her wedding day, which was an intimate ceremony with only 100 of their closest family and friends (for a member of the royal family, that’s really intimate).

Giles Deacon designed Middleton’s gorgeous lace wedding gown, which included cap sleeves, a high neckline, and an elegant back cutout. Her hair looked beautifully bridal in a swept up style, and she wore a dramatic veil by Stephen Jones. She embraced her royal status by wearing a tiara by Robinson Pelham. 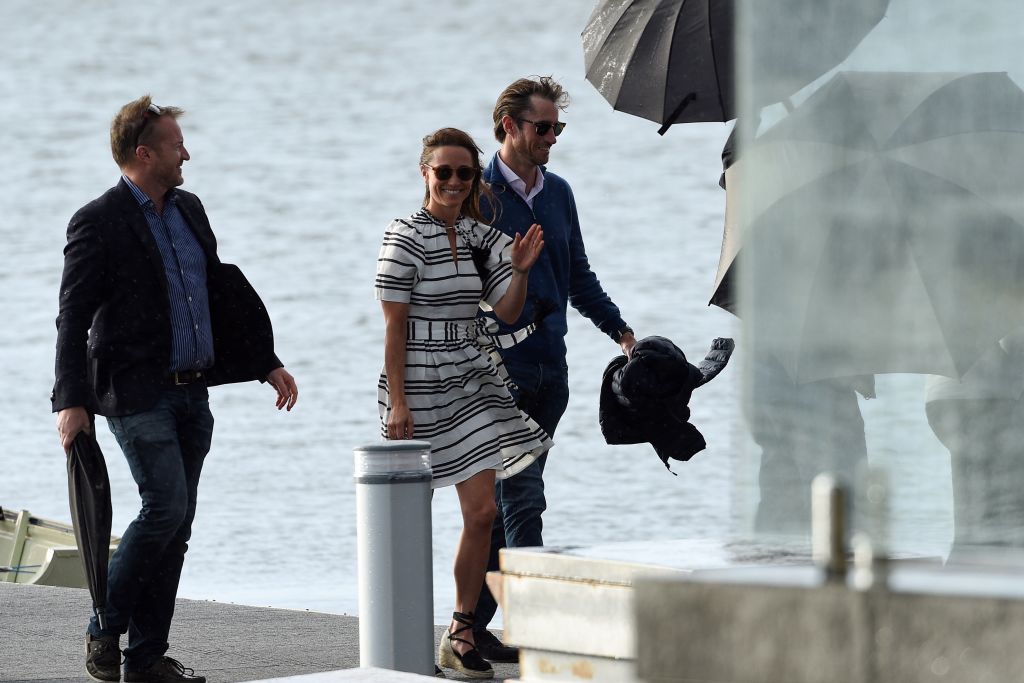 Pippa Middleton (C) and her husband James Matthews (R) arrive at Rose Bay Wharf by sea plane in Sydney on May 31, 2017 for their honeymoon. | SAEED KHAN/AFP/Getty Images

Post wedding, Middleton somehow kicked her style up another notch. Stopping in Sydney on their honeymoon on May 31, 2017, the newlyweds enjoyed a taxi boat ride around the Sydney Harbour.

Middleton wore the perfect outfit for a day of moseying around Australia, as she looks comfortable and stylish. She opted for a black and white Kate Spade dress, which features bell sleeves and tassels, and paired it with laced-up black espadrille wedges. 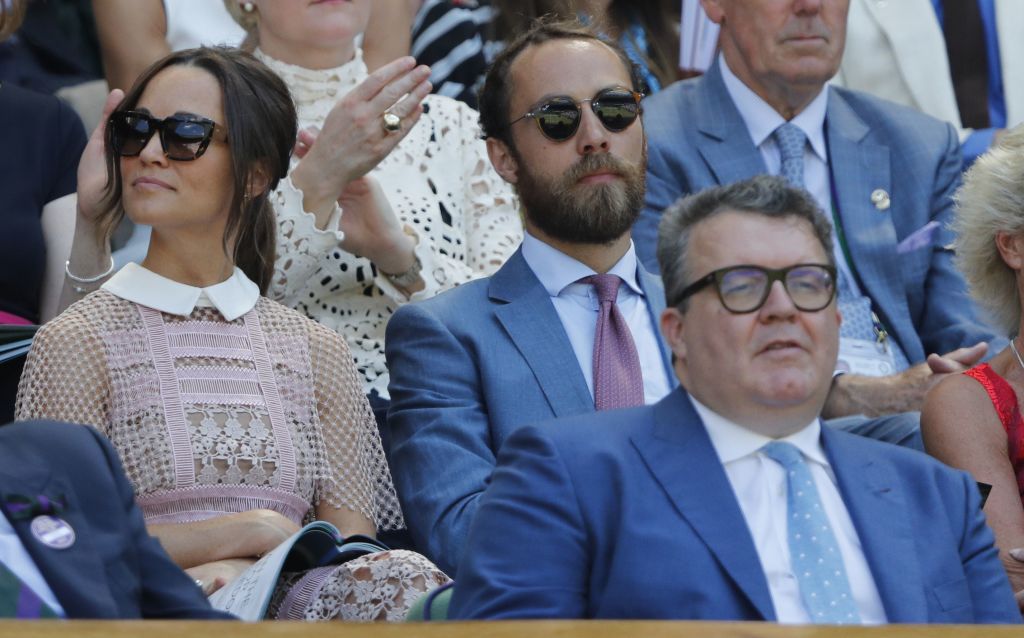 Pippa Middleton (L), and James Middleton (C) at The All England Lawn Tennis Club in Wimbledon, southwest London, on July 5, 2017 on the third day of the 2017 Wimbledon Championships. | ADRIAN DENNIS/AFP/Getty Images

Vogue called this dress the “grown-up alternative” to millennial pink, and we couldn’t agree more. Looking like she’s at a fashion show rather than yet another Wimbledon Tennis Championship in July 2017, we can’t help but notice that this dress totally looks like something the Duchess of Cambridge would wear.

This dusty pink crochet dress is by Self-Portrait, and it pretty much ties all the current trends into one. The Peter Pan collar, midi length, cutout details at the waist, and fluttering sleeves are almost too much to take in, but Middleton balances the look with a big pair of sunnies and her hair casually pulled back.

As Middleton always seems to debut her evolved fashion choices at Wimbledon, we’ll definitely be keeping an eye out next July.