‘Pirates of the Caribbean 5′: Is Orlando Bloom Returning? 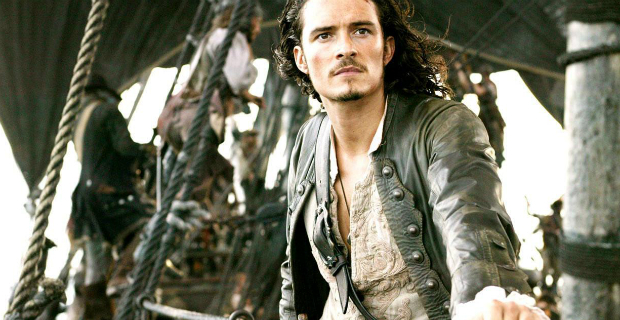 According to IGN, the star hasn’t officially signed on to appear in the forthcoming sequel yet, but is still seriously considering the option. “I’m not entirely sure that [I’ll be back] just yet, but there are talks,” said Bloom, who was an original cast member alongside Johnny Depp and Keira Knightley. He also hinted at the upcoming movie’s potential plot line, suggesting that the project may act as a vehicle to revamp the series.

“Basically they want to reboot the whole franchise, I think, and do something with me and the relationship with my son,” Bloom told IGN. “I’m of course Davey Jones now, so I’m down the bottom of the ocean. It might be kind of fun to do something where I’m rumbling round the bottom of the ocean, because I won’t look anything like me. [Gestures to face.] Get all gnarly.”

After the original 2003 film, The Curse of the Black Pearl, Bloom appeared in both 2006’s Dead Man’s Chest and 2007’s At World’s End, although the latter two films shifted most of the story’s focus to Depp’s eccentrically played character, Captain Jack Sparrow. Though each of the sequels brought in big money at the box office (garnering $1 billion and more than $963 million, respectively), they also earned increasingly mixed reviews from critics and moviegoers alike.

The following and most recent Pirates installment, On Stranger Tides, came in 2011, with both Bloom and Knightley departing the series and Penelope Cruz and Ian McShane joining Depp for their own round of adventures. Similar to its two predecessors, On Stranger Tides was met with a mostly negative critical response. Despite this, it ended up becoming the franchise’s most successful installment to date, with a $1.046 billion worldwide gross.

With those kinds of earnings, another sequel was inevitable. But given the lackluster reaction the last flick warranted, it also makes sense that Disney would want to use the next installment as a soft reboot to the series. As of now, the studio seems to be taking its time figuring out the specifics, even pushing the premiere date from summer 2015 to 2017. So far, we only know a few basic details about Dead Men Tell No Tales. Joachim Rønning and Espen Sandberg (Kon-Tiki) are on board to direct, with a screenplay penned by Jeff Nathanson (Tower Heist, Indiana Jones and the Kingdom of the Crystal Skull).

In terms of casting, Depp will be returning alongside up-and-comer Brenton Thwaites (The Giver), who was recently cast in the part of a British soldier. Geoffrey Rush is also rumored to coming back as Barbossa, while Javier Bardem is reportedly the front runner to play new villain Captain Brand, a ghost bent on revenge against Sparrow, whom he blames for the murder of his brother. According to Variety, Disney is also reportedly currently in the process of casting the female lead for the fifth installment, with a list including names like Lucy Boynton, Gabriella Wilde, Jenna Thiam, Kaya Scodelario, and Alexandra Dowling.

Fans will have to stay tuned to see if Bloom ends up returning to the cast. Filming for the movie is set to kick off in Australia early in 2015, so more details will likely be headed our way soon. Pirates Of The Caribbean: Dead Men Tell No Tales is currently scheduled to hit theaters on July 7, 2017.