No Man’s Sky, the hyped-through-the-roof PlayStation 4 and PC game, is finally here after three solid years of growing expectations. Probably no game could live up to the kind of hype this game generated, so it’s no surprise that it’s not the best game ever made. But if you can keep your expectations in check, it may strike a chord with you. Then again, it may not.

Let’s cut right to the chase. After years of hearing developer Hello Games waffling on this question, here’s what No Man’s Sky actually is: It’s a game about staying alive, gathering resources on and between planets, crafting items, and moving along to the next planet to do it again. There’s more to do in the game, but that’s how you’ll spend the overwhelming majority of your time. If that sounds like a grind, that’s because it is. 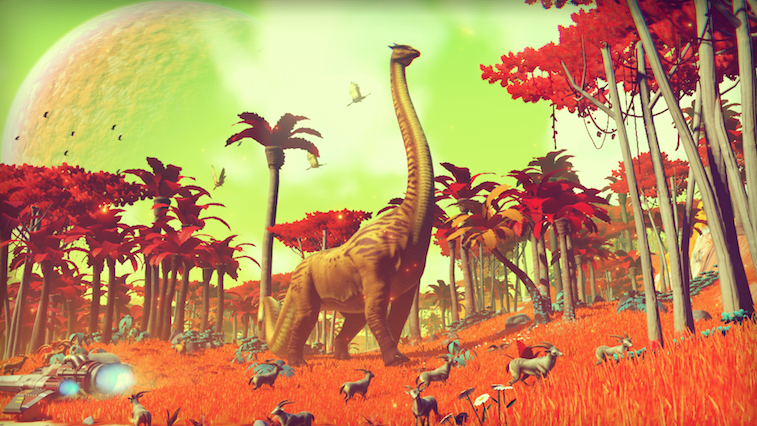 The tech behind No Man’s Sky is impressive. Thanks to some coding wizardry, the game contains more planets than you could possibly visit, or even want to visit. It has green planets, red planets, orange planets, purple planets, planets with intricate cave systems, planets with water, planets with creatures large and small, and planets teeming with security drones. The problem is that once you’ve visited a few planets, they all tend to blend together.

Clearly, Hello Games wanted players to be in awe of the game’s scale. And it is awesome to explore these sci-fi worlds, at least at first. But the most interesting thing about sci-fi worlds the games, movies, and books we love is what kind of dramatic things happen on them.

In the Mass Effect series, you lead a team through the galaxy to stop aliens from wiping out all of humankind. In Star Wars a group of scrappy rebels takes down an evil empire. In Dune, various factions go to extreme lengths to vie for control of a valuable commodity. In these pieces of media, it’s not the planets themselves that are interesting. The planets are a backdrop for human drama. In many ways, No Man’s Sky feel like all backdrop, with very little drama at all.

While some minor mysteries unravel as you play — if you choose to follow them, that is — the vast majority of the game is focused on traveling from one mostly barren planet to another, gathering resources into your painfully limited inventory. 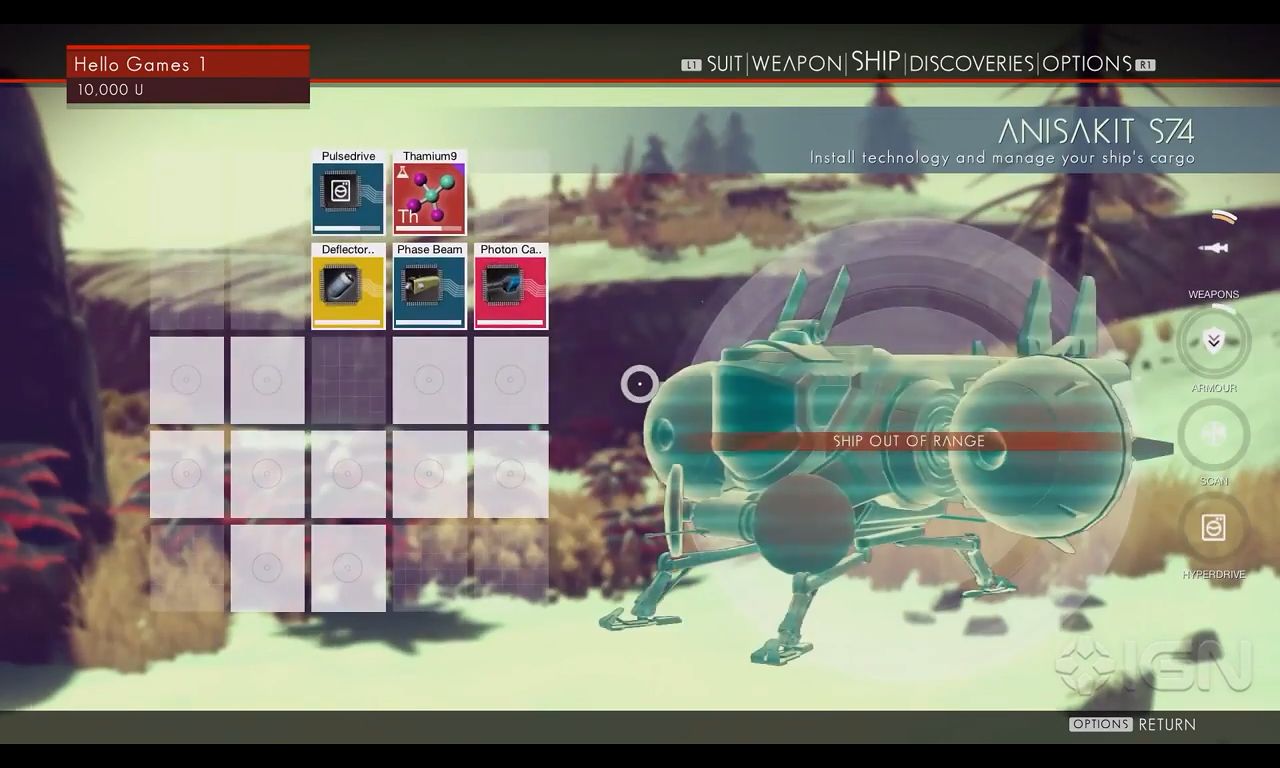 It’s possible some gamers get a kick out of shuffling items to and from multiple inventories, but I’m not one of them. Both your suit and your ship have separate inventories for storing the resources you collect. Why you have two inventories is anyone’s guess. You can upgrade the size of both inventories, but it takes a while to do so. In the meantime, you’re constantly at full capacity, so you always have to figure out which resources to drop or sell to make room for the ones you need.

But because it takes a long time to get a handle on what resources are required for what purposes, you never know if you’re getting rid of valuable things you should be hanging on to. There’s nothing fun about dealing with your inventory, and if you’re playing on PS4, it’s made even worse by the interface, which was clearly designed for PC.

One source of potential fun is combat, but No Man’s Sky doesn’t live up to its potential on this front. Destiny it’s not. You can fight three categories of things: alien animals, security robots, and space pirates. There’s really no strategy involved in any of it aside from aiming and shooting, which isn’t all that easy thanks to poor combat mechanics. The game has near-infinite species of alien animals, but they all act pretty much the same: they either ignore you, run away, or approach and attack. Space combat looks cooler, but even it isn’t very dynamic. 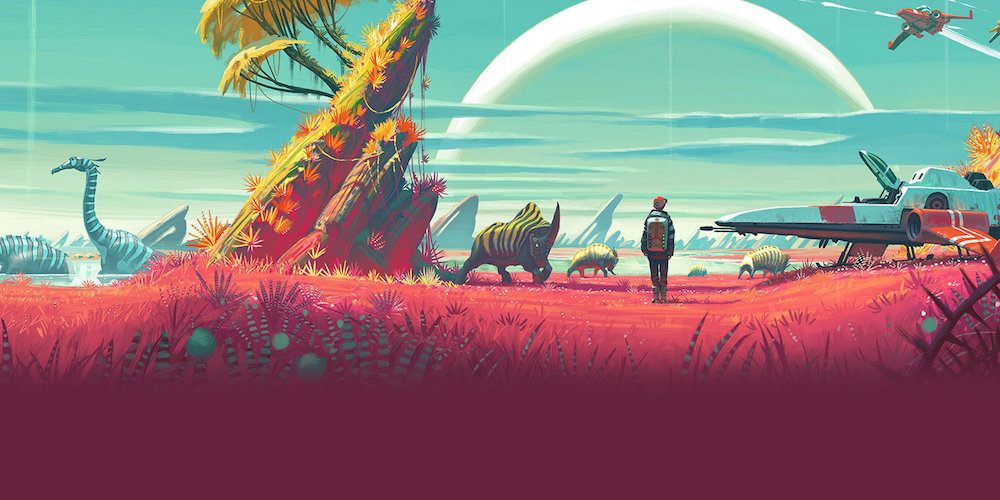 Back on the ground, you might wish the game had a map. It’s not a huge deal on the surface of planets, because there’s always an icon indicating where your ship is. But when you go subterranean, things get sticky. Caves are everywhere, and they’re necessary to explore so you can grab their resources and get out of whatever shield-draining effect the planet’s weather has on your suit.

But once you start exploring a cave, it’s incredibly easy to get lost. Caverns twist and turn and branch off in all directions, and everything looks exactly the same. Go far enough in, and you’re all but guaranteed to lose track of the entrance. I’ve wasted hours at a time just trying to find my way out of a cave. A map would have saved an incredible amount of frustration.

There’s a balance games have to achieve when they offer RPG elements to make your character or your equipment more powerful. The challenge is that they still have to be fun at the beginning, when you’re at your weakest. I’m not sure No Man’s Sky succeeds in finding this balance. For the first few hours, the game feels like a slog, a grind, a chore to play, what with your tiny inventory and the lack of explanation about how even the most basic systems work. Progress is hard won over hours, hours you could spend in another more enjoyable game.

6. It could get better

Hello Games promises it will continue to update No Man’s Sky for some time to come, adding new features, squashing bugs, and adding “quality of life” enhancements that will make it less frustrating to play. One major feature the developer promises is some kind of base building functionality, so it sounds like the game could offer a very different experience in a year’s time.

Still, the experience right now is not one I enjoyed very much. If it sounds like your kind of thing, by all means, give it a shot. But don’t go into it expecting it to live up to the impossible hype some gamers have bought into. It doesn’t. It can’t. But neither does it offer gameplay I would describe as satisfying or enjoyable. Mostly I found it to be a grind.

It offers a universe of possibility, but doesn’t do enough with it.