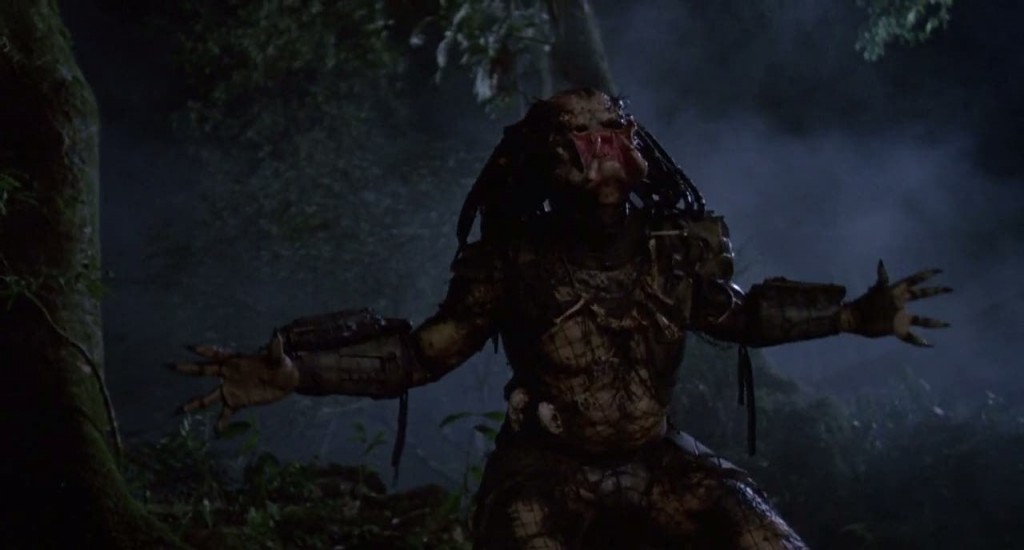 Earlier this week, it was announced that 20th Century Fox’s Predator series would return to the big screen, with Shane Black (Iron Man 3, Kiss Kiss Bang Bang) set to oversee the treatment and direct while handing over screenwriting duties to Fred Dekker (RoboCop 3, The Monster Squad). And while it was widely assumed that the new entry in the long-running action-horror series would be undergoing yet another reboot, it appears Black and Dekker are thinking sequel.

According to Black, the new Predator film is being approached as an “inventive sequel,” building off the strengths of the original films rather than starting anew. “Why start over, when you’ve all this rich mythology yet to mine?” Black explained. He added that he likes “the idea of expanding and exploring the existing Predator mythology, rather than hitting the restart button.”

While Black will not be writing the script, his partnership with UCLA classmate Dekker dates back to 1987 when the pair wrote The Monster Squad. Also upping the nostalgia factor, and perhaps the opportunity for the series to return to its successful roots, is the addition of producer John Davis — one of the original film’s three producers along with Joel Silver and Lawrence Gordon.

Black has experienced a long and successful career as screenwriter dating back to 1987′s Lethal Weapon when he quickly ascended to the top of the Hollywood A-list as one of the best action screenwriters of his generation. But it wasn’t until 2005 that Black first stepped into the directing chair, writing and directing Kiss Kiss Bang Bang which earned high marks from critics while also being one of the key films to jumpstart Robert Downey Jr.’s Hollywood comeback. Although the film didn’t impress at the box office, Black and Downey Jr. would link up once again in the box office smash Iron Man 3 cementing Black’s status as one of most in demand directors in Hollywood after the Marvel film grossed $1.2 billion at the worldwide box office.

Interestingly enough, Black’s roots in the Predator franchise actually date back to the first film in the series – though not in the way you’d think. The 1987 classic, which was directed by John McTiernan (Die Hard, The Hunt For Red October) and starred Arnold Schwarzenegger, also featured Black in a brief, but memorable role as Hawkins — the dirty joke-telling member of Schwarzenegger’s special forces team who becomes the first to die at the hands of the titular alien.

Before being added to the cast, 20th Century Fox had postured unsuccessfully for Black to polish the Predator script, despite numerous tries. The studio would later offer him a small role in the film and allegedly ask him upon arrival if he would work on the script, for which he again said no. There were also rumors that Black was tasked with keeping an eye on the then-inexperienced Predator director McTiernan.

Since the first installment, the Predator series has struggled to find the recipe that made the original such an enduring classic. Predator 2 arrived in 1990 with Danny Glover as the lead, but the film received poor reviews from critics and was a disappointment at the box office. The sequel has since found some footing as a strangely campy, cult classic, but there’s no doubting that the film did not at all stack up to its predecessor. From there, the series linked up with 20th Century Fox’s Alien franchise for several ill-advised Aliens vs. Predator films before Robert Rodriquez produced the newest installment in the franchise, Predators, in 2010.

Black, whose status as a big-time director has never been higher, also has several other high-profile projects on the way besides the newest Predator installment. He’s currently involved with a 1970s crime film called The Nice Guys, which is reportedly close to casting both Ryan Gosling and Russell Crowe. He’s also developing an adaption of the 1930s pulp hero Doc Savage, with Chris Hemsworth eyed for the lead.