One of the things we love about the British royal family is how adorable Prince William and Kate Middleton’s children are. The little ones steal the show whenever we see them. From royal weddings to family portraits these young royals can really warm your heart with their delightful antics and expressions.

It would be impossible to list all of their cute moments but here we’ve compiled a list of some we thought needed to be mentioned and shared again. So kick back, relax, and get ready to smile at these photos of Prince George, Princess Charlotte, and Prince Louis.

This was one of the first pictures Kensington Palace released of the future king with his baby sister, Princess Charlotte.

The photos were released about a month after the princess was born and gave the public a chance to see both of the royal siblings together at the same time. 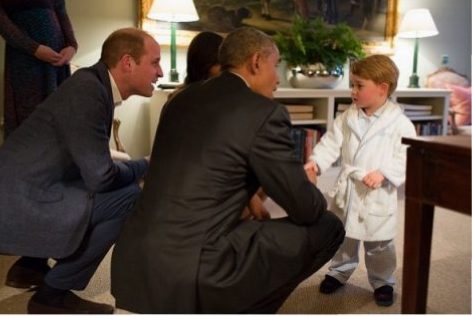 Who can forget the 2016 photo from when Michelle and Barack Obama traveled across the pond and met a then 2-year-old Prince George?

The little royal looked too cute (and ready for bed) in his robe and slippers. The 44th president of the United States later joked about the toddler meeting him in pajamas saying, “Last week Prince George showed up to our meeting in his bathrobe. That was a slap in the face. A clear breach of protocol.”

William and Middleton’s third child, Prince Louis, was born on April 23, 2018. Just like with his siblings, the duke and duchess gave us our first look at their new bundle of joy outside of St. Mary’s Hospital in London shortly after his birth. But the proud parents shared more intimate pictures of the prince via the palace’s social media account a few weeks later.

In a photo that is sure to melt your heart, Princess Charlotte is shown holding and kissing her baby brother on the forehead.

Prince George and Princess Charlotte are experts when it comes to weddings and stepping into the role of page boy and bridesmaid. The young royals first served as such when their Aunt Pippa married James Matthews in May 2017. They did so again a year later at their Uncle Harry’s royal wedding and after that, at their second cousin Princess Eugenie’s in October 2018.

Harry and Meghan Markle’s ceremony was televised in several different countries and was a time for the world to see how adorable the siblings looked in their attire.

We certainly can’t wait till their little brother starts taking part in wedding parties as well.

Princess Charlotte sticking her tongue out

Also at Prince Harry’s wedding, Charlotte had a little fun making silly faces and sticking out her tongue as she traveled in a car on her way to the affair.

Charlotte gave us some more cute moments that day and as she always does was sure to wave to the crowd when she walked in and out of St. George’s Chapel at Windsor Castle.