Prince Harry Meets Melania Trump: The Real Reason Behind His ‘Sign of the Devil’ Gesture

When it comes to politics, image is everything. Every action you take can have extreme consequences when dealing on a domestic or international level. Even the slightest misstep can come across as rude. Say, for example, you are in the Middle East and you cross your leg and expose the bottom of your foot to someone. It may seem innocuous, but showing the bottom of your feet to some Middle Eastern people is a huge sign of disrespect.

It can also be important in negotiations. Allowing your opposition to lead is a power move. You can see this play out rather comedically, when President Bill Clinton, Palestinian Authority chairman Yasser Arafat, and Israeli Prime Minister Ehud Barak met for peace negotiations at Camp David back in 2000. Yasser and Edud argued about who would walk in the door first, and started shoving each other to go first.

That’s how important body language is in the world stage. You can use it to show respect or demonstrate power, and sometimes it can mean literally nothing. That’s why the recent photo of Melania Trump and Prince Harry is so intriguing. According to some, he is subtly showing the “Sign Of The Beast,” but is there any truth to their interpretation of his body the language? We will go in depth to show you what it could be, and where we’ve actually seen this before.

Prince Harry was attending the annual Invictus Games in Canada and happened to bump into Melania Trump while he was there. Naturally, as any world leader would do out of respect for the other, they posed for a photo together. In the photo, Melania has her arms to her side, while Harry has his hand in the breast of his sports jacket. Only his thumb, index finger, and pinky finger are exposed, while his ring and middle finger hide under the breast of the jacket. A lot of people went to social media to express their ideas, and there were many.

Next: What are people thinking Harry was doing?

Is Harry really giving the sign of the beast?

The Sign of the Beast, if you’re not familiar, is 666. A lot of people attributed the hand gesture that people make when they’re at a rock concert to being a symbol of allegiance with the Satan himself. The thumb, index, and pinky finger all make the top of the 6, while the middle and ring finger makes the circle of the 6. You’re looking at your hand, aren’t you?

“This is called the horn or the devil’s horn, and what people are saying in the media about it is not correct,” Patti Wood told the Huffington Post. Wood is a body language expert and has written about the subject numerous times. a lot of people interpreted this to mean that Harry was the devil, but Wood disagrees. “It is not a sign that he’s the devil, but rather a warning off of evil spirits. It’s a protective gesture against evil or darkness and illness,” she goes on to say.

Next: So was Harry calling Melania the devil?

Was he defending himself subconsciously?

When people are in fear of something or nervous around something or someone, they tend to exhibit something called “self-comfort”. At least that is what we all do it, and Prince Harry could perceive Melania as a threat. It would make sense, considering where the Trump family’s reputation sits with Europe. In particular, the U.K. has reason to be leery, after Trump’s attack on London Mayor Sadiq Khan, and his presumptions in the recent London train bombing, that miffed Prime Minister Theresa May.

Next: Has he ever done this before?

One might think Harry is a little nervous all the time

There are multiple photos of Harry “self-comforting” when in the presence of pretty much any world leader. In the photo above, Harry is seen with his brother and sister-in-law greeting the Obamas. In the photo, you can clearly see his hand, the same hand in the Melania/Harry photo, covering his stomach. So this may just be a case of odd positioning. But that doesn’t change the fact that the rest of his body language is saying something about the meeting.

Next: Turns out there is something to see there, but you were looking in the wrong place.

Harry did not want to be there

Another body language expert, Joe Navarro, was quick to point out to the HuffPost, “I have to wonder, was he going to unbutton his jacket and then changed his mind? Was he in prep for sitting and then they asked him to stand again to do more photos? To me, you can’t draw too many inferences from the photo. I wouldn’t personally read too much into that.”

Next: You should really pay attention to Melania’s body language.

Wood notes in HuffPo that Melania kept her arms tightly to her sides, which is regarded as a fear response (kind of like virtually every photo Melania has ever taken next to Donald Trump). At least in the photo with Harry, she is standing a bit closer.

Next: So what is the final word? 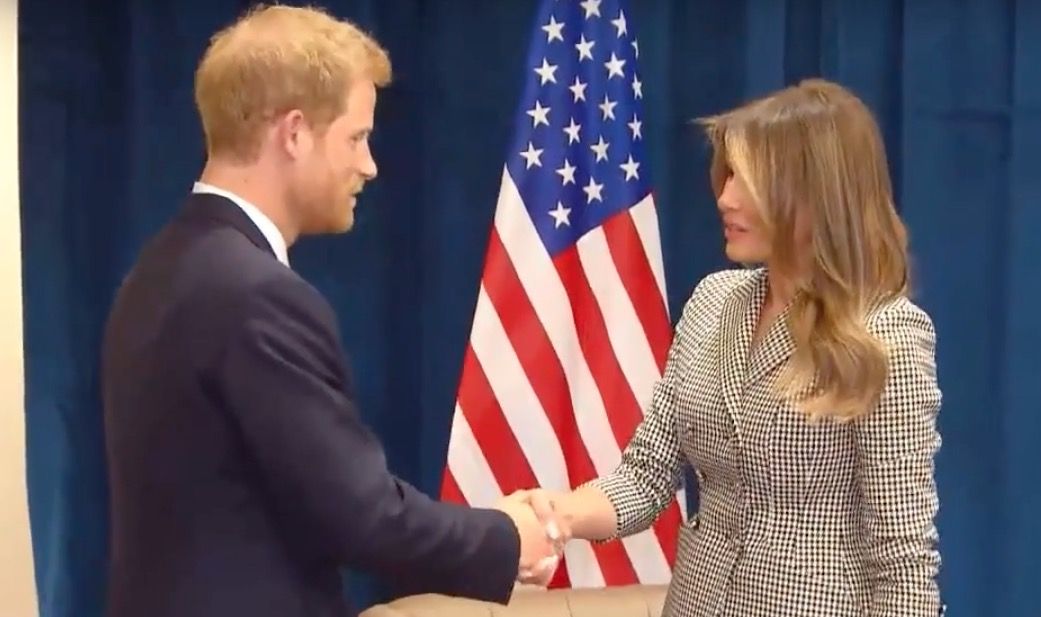 In this case, not so much. If you actually watch the video of the interaction, it’s very apparent that Joe Navarro’s explanation makes the most sense. In the video, you can see Harry backing up to take a seat next to Melania, and as he sits, he unbuttons his jacket as any gentleman who has worn a sports jacket or blazer would do. It’s a classic move to prevent the button from flying off the jacket and hitting someone, executed by a British royal trained in how to be a gentleman.