Actress Heather Lind has accused George H.W. Bush of groping her while they were taking a photo at an event.

Lind made this accusation in an Instagram post late on Tuesday, but by Wednesday morning, the post had been deleted. It’s unclear why Lind decided to delete the post, but it has been saved via screenshots.

With the post, Lind included a picture of Barack Obama shaking George H.W. Bush’s hand at a recent fundraiser for those affected by Hurricane Harvey, Hurricane Maria, and Hurricane Irma. In the caption, Lind wrote a lengthy statement describing her experience of meeting George H.W. Bush and being groped by him.

“I was disturbed today by a photo I saw of President Barack Obama shaking hands with George H. W. Bush in a gathering of ex-presidents organizing aid to states and territories damaged by recent hurricanes. I found it disturbing because I recognize the respect ex-presidents are given for having served. And I feel pride and reverence toward many of the men in the photo. But when I got the chance to meet George H. W. Bush four years ago to promote a historical television show I was working on, he sexually assaulted me while I was posing for a similar photo. He didn’t shake my hand. He touched me from behind from his wheelchair with his wife Barbara Bush by his side. He told me a dirty joke. And then, all the while being photographed, touched me again. Barbara rolled her eyes as if to say “not again”. His security guard told me I shouldn’t have stood next to him for the photo. We were instructed to call him Mr. President. It seems to me a President’s power is in his or her capacity to enact positive change, actually help people, and serve as a symbol of our democracy. He relinquished that power when he used it against me and, judging from the comments of those around him, countless other women before me. What comforts me is that I too can use my power, which isn’t so different from a President really. I can enact positive change. I can actually help people. I can be a symbol of my democracy. I can refuse to call him President, and call out other abuses of power when I see them. I can vote for a President, in part, by the nature of his or her character, knowing that his or her political decisions must necessarily stem from that character. My fellow cast-mates and producers helped me that day and continue to support me. I am grateful for the bravery of other women who have spoken up and written about their experiences. And I thank President Barack Obama for the gesture of respect he made toward George H. W. Bush for the sake of our country, but I do not respect him. #metoo”

This alleged incident would have happened on Mar. 29, 2014, when the former president hosted a private screening for the cast and crew of AMC’s show Turn: Washington’s Spies. A few photos were taken that day and are still available on AMC’s website. The following is the only photo in which Lind is standing directly next to the former president: 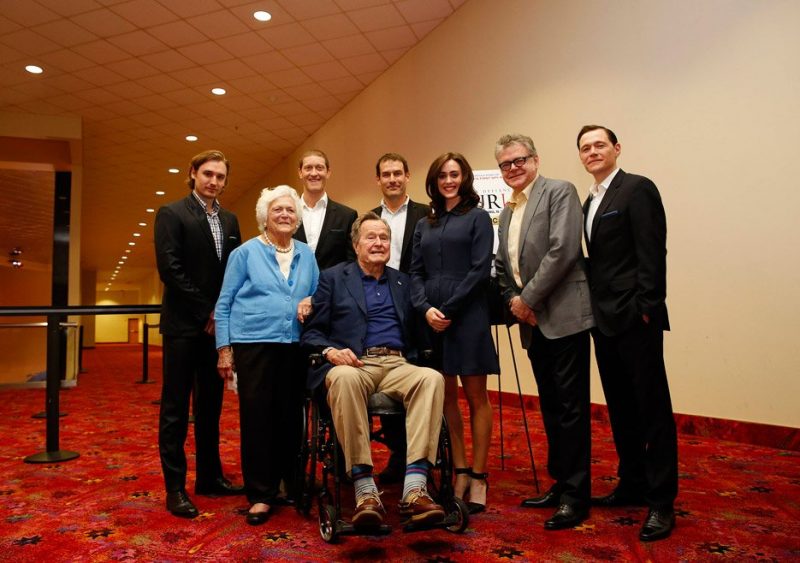 Heather Lind and the rest of the team behind Turn: Washington’s Spies take a photo with George H.W. Bush. | Aaon M. Sprecher/Invision for AMC/AP Images

A spokesman for George H.W. Bush has released a statement not denying the incident took place but saying that the former president was just trying to be funny.

“President Bush would never—under any circumstance—intentionally cause anyone distress, and he most sincerely apologizes if his attempt at humor offended Ms. Lind,” the spokesperson said, according to Newsweek.

Lind mentions in her post that she told her Turn coworkers about the alleged incident at the time. Author Alexander Rose, who was there for the 2014 event, said on Twitter today that Lind’s account is completely accurate and that Bush was not simply making a joke.

Re: @heatherglind & ex-Pres. Bush, her account is 100% accurate. I was there. It was not a "joke" gone awry. @westratenick

Lind’s costar Nick Westrate, who plays Robert Townsend on the series, is also showing his support for her, although he was not present for the 2014 event.

Could not be prouder of @heatherglind. I hope everyone keeps speaking up and speaking out. https://t.co/nT7stB4r4M

Anyone not standing with and up for @heatherglind can go right ahead and unfollow me, block me, mute me or just plain fuck off.

The #TurnAMC family is Strong. Our shows about how when anyone does the right & brave thing they can change the world. I'm so proud of that.