Real People Who Paid to Look Like Fictional Characters

Have you ever wished for a moment that you could look like a beautiful Disney princess or a strong superhero? Maybe you’ve even dressed like one for a costume party, but some people want the look of their favorite fictional characters to be permanent. Those people decided to go under the knife to attain the looks they desire of the protagonists we see on TV or read about in fairy tales and comic books.

Here’s a list of some real people who paid big bucks to look like these fictional TV and movie figures. There’s even a dog — yes, a dog — whose owners took the canine for plastic surgery to resemble a pooch in a popular movie. 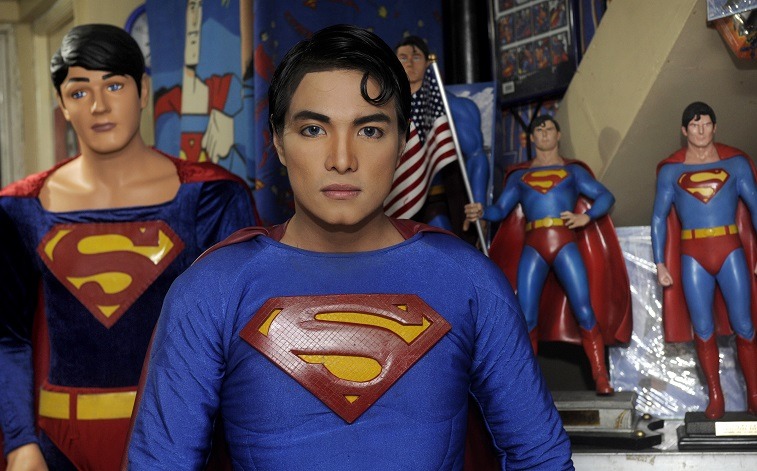 Filopino fashion designer Herbert Chavez dresses like the “Man of Steel” as he stands among his huge collection of Superman paraphernalia at his home in Calamba, south of Manila, on October 13, 2011. | Jay Directo/AFP/Getty Images

Herbert Chavez wanted to look just like one of the most famous superheroes of all time, so he had more than 20 surgeries to achieve that. The Filipino man describes himself as the Last Son of Krypton’s biggest fan and therefore underwent so many procedures to look less like himself and more like Superman.

Chavez even appeared on the E! network show Botched with his story detailing exactly what he had done, from liposuction to skin bleaching to implants to extensive work on his face, mainly his nose and chin.

Next: This great-grandma tried to buy the look of a cartoon siren.

Jessica Rabbit from the film Who Framed Roger Rabbit may be the most voluptuous animated character of all time, and some women wouldn’t mind having their own curvaceous appeal like her. This was the case for great-grandmother Annette Edwards, who went the plastic-surgery route to achieve that look. Edwards spent around $16,000 on cheek and breast implants.

The British woman said that in addition to the procedures, she had to “eat like a rabbit” as well on what she called “The Jessica Diet” in order get her weight down.

Next: This woman also paid to get Jessica Rabbit’s curves. 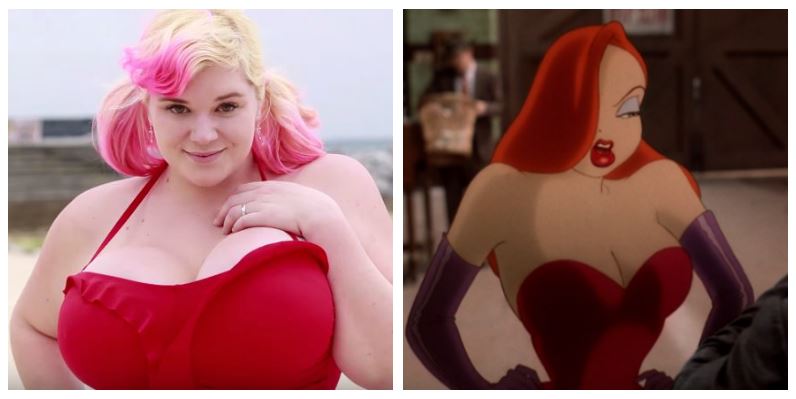 Edwards isn’t alone in trying to attain the character’s curves with some surgery. Pin-up model Penny Brown also went under the knife to get her body to match her cartoon idol’s body.

“I’ve been obsessed with Jessica Rabbit from a really early age,” Brown told the Mirror. “I think she is incredibly sexy and there’s a real power and strength to her character. I’ve always wanted to copy that—at five I was already thinking about breast implants.”

The Australian native has had multiple boob jobs going all the way up to an O-cup size. To keep her waist super tiny for that hourglass shape, she squeezes into a corset for several hours a day and her husband, Cooper, said he loves his wife’s new figure.

Next: This bodybuilder wanted muscles like an intimidating superhero. Romario Dos Santos Alves’ story of going to extremes to be like a comic book character is different than simply paying for surgical procedures. The bodybuilder instead paid with his health and sanity when he used a dangerous synthetic filler for his goal inspired by the Incredible Hulk.

Alves injected his biceps with a mixture of oil and alcohol to get a Hulk-esque frame. The Brazilian’s muscles became so large that they frightened young children who called him a “monster” and “beast.” Alves even tried to take his own life and said that doctors told him his arms would need to be amputated because his muscles had turned hard as a rock.

Alves has learned from the experience and no longer injects himself.

Next: This woman had painful surgery to look like this popular female superhero.

Pixee Fox wanted desperately to look like a female superhero, particularly Wonder Woman, so she went under the knife countless times to try and get the look of the comic book character. She’s had several painful operations including four breast augmentations, two liposuctions, two blepharoplasties, labiaplasty, eye-color changing implants, brow lift, butt lift, and having six ribs removed. In 2017, she even went to the extreme of having her jaw broken, shaved and then re-set.

She hopes to one day star in her very own comic book series.

Next: This is the most popular fictional character people pay to look like.

There are quite a few females who have paid big money and underwent many painful cosmetic surgeries to look like the iconic Barbie doll. Nannette Hammond is just one of many who have done so and she claims to have paid a whopping $500,000 for those surgeries. Along with the dental work and procedures she’s had done to her face, Hammond also had multiple breast augmentations and now wears an H cup. Because of her 18-inch waist, the mother of five has her clothes custom-made for her.

Hammond has the support of her husband, Dave, with her transformation into a real-life Barbie. In fact, he’s the one who pays for her procedures.

Next: This is another woman who wanted to be a ‘Barbie Girl.’

Another extreme case of going under to get that Barbie look is that of Sarah Burge. Like Hammond, Burge has spent over half a million dollars trying to look just like a real-life Barbie and like Chavez, the E! Botched doctors wouldn’t touch her.

Burge beat the world record for the most plastic surgeries in her quest to become a human Barbie. Her more than 150 procedures include work on her breasts, her butt, her nose, her tummy, her jaw, as well as lip enhancements, and Botox, which she now performs herself as a practitioner.

Next: This man also had surgeries to look like a doll.

Of course, we couldn’t mention the women who want to be human Barbies without mentioning a man who wants to be a human Ken. Rodrigo Alves is the man dubbed as the “human Ken doll.” He’s undergone a number of surgical procedures to look like Barbie’s beau from jaw liposuction to calf shaping to pectoral implants, and has spent in the ballpark of $200,000.

However, Alves’ surgical obsession almost killed him in 2014, when gel injected into his arms got infected and he almost lost an arm. Since then, he has received treatment to work through some issues, but admits it won’t stop him from having more surgery.

Next: This man also wanted to look like the famous Mattel doll.

Like Alves, Justin Jedlica wants nothing more than to look like the living, breathing version of the famous doll. He’s also been dubbed as “the human Ken” and has had many surgeries ranging from pectoral implants to cheek augmentations, totaling close to $100,000.

Now in his 30s, Jedlica started having surgery to achieve his goal when he was just 18 years old and has had about 90 procedures so far.

Next: This person actually wanted to look like this terrifying villain. 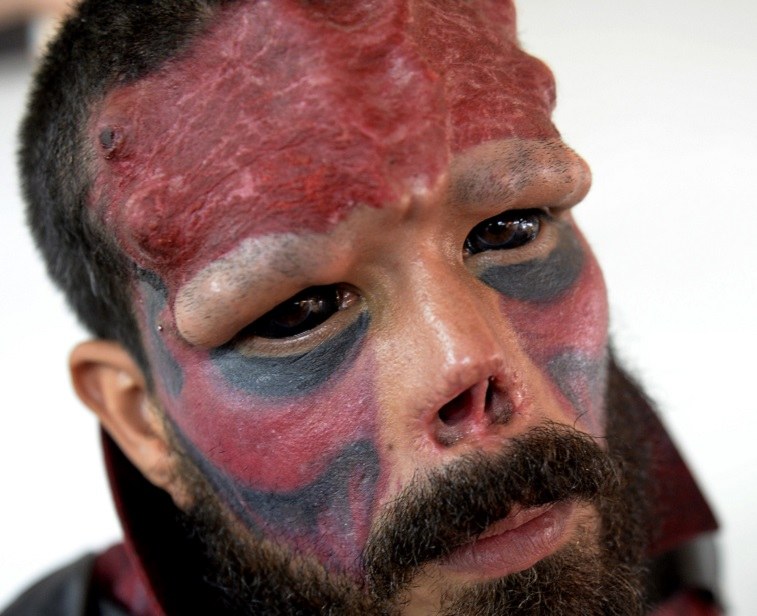 When it comes to people permanently changing their appearance to look like their desired character, resembling a terrifying villain usually doesn’t make the list. But that’s exactly what Henry Damon wanted when he had extensive surgery to look like Captain America’s nemesis, Red Skull.

Damon has had a ton of work done and none of it’s typical. The Venezuelan native had dermal implants put in his forehead, tattooing to make his eyes look as though they are black pits, and a section of his nose removed. Yes, you read that correctly. He had the entire lower part cut off so that he would have two vertical nostrils.

Next: This lady wanted to look identical to these Japanese cartoon characters. 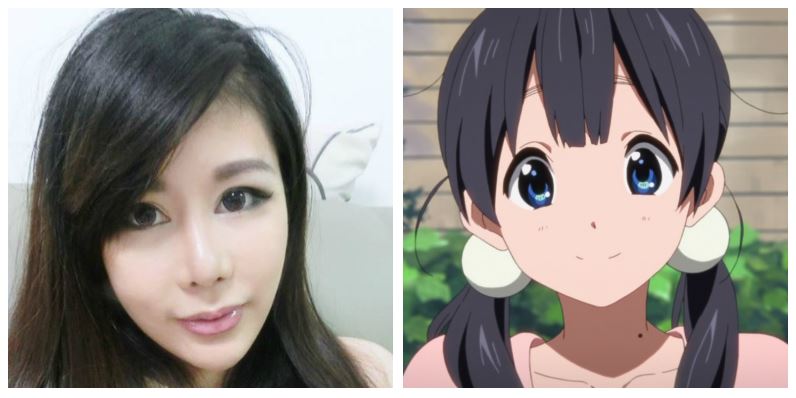 A woman from Singapore loved the look of the anime girls in Japanese cartoons so much so that she had 10 surgeries totaling more than $135,000 to get a sharper nose, smaller chin, flatter ears, and bigger eyes.

Fashion designer Jacqueline Koh has gotten Velashape (pulling of the skin to reshape the body), breast implants, eyelid surgery, several nose jobs, and shaving of the cheekbones to name a few. Nowadays, she spends a good amount of money on constantly maintaining her looks with Botox and other fillers. 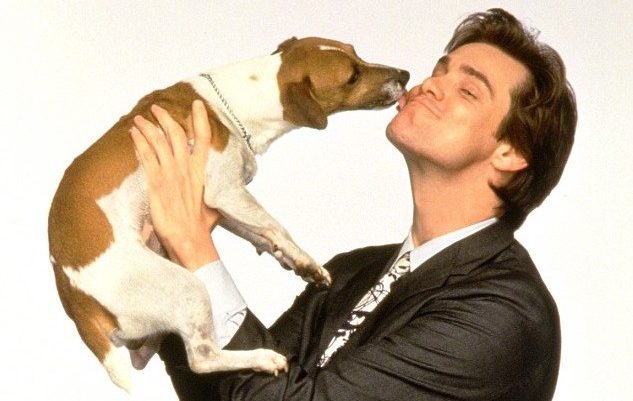 Jim Carrey holding the dog from his movie, The Mask | Dark Horse Entertainment

Up until this point, our list only consisted of humans who altered their appearances to like fictitious characters, but there is also a family who wanted plastic surgery done on their dog. The reason is so the pup could look more like the one in the movie The Mask.

Marina Esmat bought the Jack Russell Terrier for her son but was disappointed when its ears started to grow upwards instead of lying flat like Milo’s did in the film. Esmat went to surgeons in her native Russia who tried to talk the family out of having the procedure done on the canine.

Eventually, though, it was performed after the family insisted, but the owners were slammed by the media and public for putting their pet through that.

Next: Fantasy character fan paid to look like an elf.

Luis Padron is such a fan of fantasy characters that he wants to look exactly like one. He’s had numerous procedures totaling around $35,000 to look like an elf.

The Argentina native had a nose job, liposuction, and procedures to change his eye color. He also bleached his hair and skin and spends thousands of dollars a month to keep up his appearance.

Next: This model was surgically modified with an elf characteristic. Canadian model Melynda Moon is also a fan of elves; particularly those in the famous Lord of the Rings books. An unmistakable characteristic an elf has that a human does not is pointy ears. In order to get those, Moon underwent a surgical procedure which involved removing the triangular piece from the tops of her ears and suturing the two sides together for that signature elfin look.

Moon believes she was a fairy in a past life.

Next: This woman really loved the look of all the Disney Princesses.

A woman named Sarah Ingle from Denver, Colorado, couldn’t choose just one look because she loved all the looks of the Disney Princesses, so she spent more than $14,000 to get them. Ingle claims that she did not have any plastic surgery though, instead she spent all that money on custom-made outfits of several different princesses.

Ingle dresses up as Sleeping Beauty, the Little Mermaid, and Elsa from Frozen, among others. She says it takes about three hours to get into the costume, wigs, and full makeup. Sometimes Ingle has to wear colored contacts if the character has a different eye color than her hazel color. She has done appearances at children’s birthday parties and said her dream job is to be a Disney Princess at one of the theme parks.

Read more: Human Barbie Reveals What She Looked Like Before $500,000 of Plastic Surgery