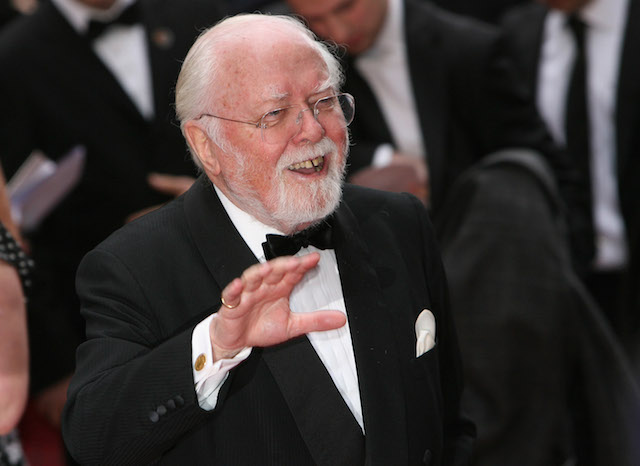 The acclaimed actor, director, and icon of British film Lord Richard Attenborough passed away over the weekend just days before his 91st birthday. Attenborough was known for iconic work in front of and behind the camera as well as on the stage, which led to him being knighted in 1976. He holds a litany of other honors from a variety of organizations from the Indian government’s highest civilian award to several Academy Awards for his decades-long career.

Attenborough’s career began in the theater. He starred in a production of Agatha Christie’s The Mousetrap, which went on to be the world’s longest running stage production. He attended the Royal Academy of Dramatic Arts after winning a scholarship to the school at age sixteen. There he met his wife — Sheila Sim, also an actress — and he remained a patron of the institution until his death. Through the 1940s and 1950s, Attenborough was a popular fixture in British film. He didn’t break into Hollywood until 1963 with a role in the acclaimed World War II film The Great Escape. Attenborough acted prolifically, and to great acclaim, through the 1960s and 1970s, but stopped taking roles after The Human Factor in 1979 in order to focus on directing.

Attenborough’s most-honored achievement was directing the 1982 biopic Gandhi, a passion project he was forced to finance himself and took him twenty years to finish. Hollywood producers refused to fund a movie about the Indian civil rights leader, but it ended up performing well at the box office as well as winning eight Academy Awards, including Best Picture and Best Director trophies for Attenborough, as well as Best Actor for Ben Kingsley.

“Richard Attenborough trusted me with the crucial and central task of bringing to life a dream it took him twenty years to bring to fruition. When he gave me the part of Gandhi, it was with great grace and joy. He placed in me an absolute trust and in turn, I placed an absolute trust in him and grew to love him. I, along with millions of others whom he touched through his life and work, will miss him dearly,” said Sir Ben Kingsley, who won an Oscar for playing Gandhi in the movie, in a statement seen by Deadline.

The actor became known to a new generation of fans when he played Dr. John Hammond in Steven Spielberg’s Jurassic Park, the character responsible for genetically engineering dinosaurs from DNA found inside fossilized mosquitoes. Spielberg had this to say of the actor, per Deadline: “Dickie Attenborough was passionate about everything in his life. Family, friends, his country and career. He made a gift to the world with his emotional epic Gandhi and he was the perfect ringmaster to bring the dinosaurs back to life as John Hammond in Jurassic Park.  He was a dear friend and I am standing in an endless line of those who completely adored him.”

Attenborough is survived by his wife; son, Michael; and daughter, Charlotte. Another daughter, Jane, died with her daughter Lucy during the tsunami that devastated the southeastern Pacific in 2004. His health had declined in recent years and in 2013 he moved into a nursing home to be close to his wife, who he’d been married to since 1945. He’d been confined to a wheelchair for five years after suffering a devastating stroke. His death was confirmed to the BBC by his son.