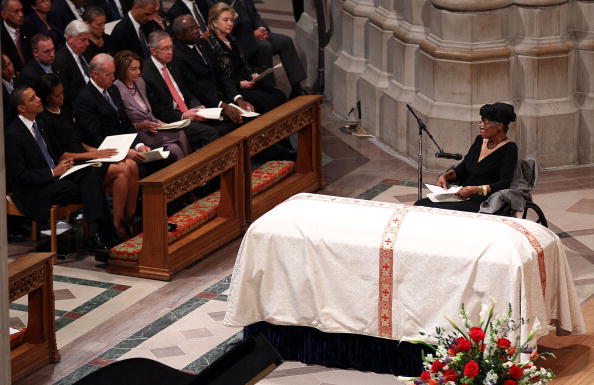 Maya Angelou, who died today at the age of 86, was a writer, a leader, a courageous social activist, a usurper of cultural norms, and a challenger of prejudice; but, above all, she was a poet, famously in love with words.

Born in St. Louis, Maya Angelou grew up with segregation, and her writing captured the malaise of the Jim Crow south. She was raped as a child and spent much of her adolescence in a state of discomforting quietude. Her mother, Vivian Baxter, was volatile and beautiful, and Angelou’s 2013 book Mom & Me & Mom depicted their wavering relationship.

In the 1950s, Angelou traveled to Europe to dance in the production Porgy and Bess in an all black ensemble. She was a calypso singer and a dancer — a natural performer. Her writing would be deeply influenced by these experiences, and by the nearly-tangible feeling of conversation and speech.

Angelou’s classic book, I Know Why the Caged Bird Sings, simultaneously sought to elucidate the way modern culture’s shrouded racism with ignorance, as well as the conventions of the autobiography genre. The book is often cited as an autobiography, a bildungsroman (like Richard Wright’s Native Son), a proto-memoir, and a roman a clef. (Genre wasn’t nearly as important in 1969 as it is now; there was no “creative nonfiction” or “memoir” or “lyrical essay,” and postmodernism was, and still is, a slippery term better left to sharper minds.) Using the same kind of literary techniques that would earned Frank McCourt a Pulitzer thirty years later, Angelou rendered her story as literature, as poetry, though not fictitiously. She used her articulate grasp of language to turn memories into art. Hilton Als eloquently said Angelou was a “pioneer of self-exposure.”

For now, suffice it to say that book is undeniably autobiographical and undeniably great.

Her writing is characterized by obsequious details, a sensuous but not romanticized way of looking at the corporeal world. Her singular style of lyricism is rooted in the oral traditions of storytelling prevalent in black communities. Filmmaker John Singleton, the youngest director ever nominated for an Academy Award, said he grew up hearing Angelou’s poems being recited by memory in his neighborhood. Not moralizing but certainly rife with aphorism, I Know Why the Caged Bird Sings has a certain directness to it, concise without being blunt, testimonial but not declarative; it’s unflinching and unsparing, and sometimes borders on solipsistic, which is appropriate for a young black woman who has to retreat within herself to hide from the vulgarities of modern America: “To be left alone on the tightrope of youthful unknowing is to experience the excruciating beauty of full freedom and the threat of eternal indecision. Few, if any, survive their teens. Most surrender to the vague but murderous pressure of adult conformity. It becomes easier to die and avoid conflict than to maintain a constant battle with the superior forces of maturity.”

According to Lyman B. Hagen’s Heart of a Woman, Mind of a Writer, and Soul of a Poet: A Critical Analysis of the Writings of Maya Angelou, the book is split into three discernible sections: arrival, sojourn, and departure, all three of which function literally and figuratively.

Als, writing for The New Yorker, says that black writers were often “Relegated to the margins of life, [and] they found it difficult to rewrite themselves as central characters. Only in private could they talk about their personal lives. But Angelou took those stories public. She wrote about blackness from the inside, without apology or defense.” Angelou gained worldwide recognition on a chilly morning in January 1993 when she read her poem “On the Pulse of Morning” for Bill Clinton’s presidential inauguration. Like Angelou, Clinton grew up poor in rural Arkansas.

In a statement, President Barack Obama said, “Today, Michelle and I join millions around the world in remembering one of the brightest lights of our time — a brilliant writer, a fierce friend and a truly phenomenal woman,” adding, “She inspired my own mother to name my sister Maya.”

You may write me down in history
With your bitter, twisted lies,
You may trod me in the very dirt
But still, like dust, I’ll rise.