Secret ‘Rick and Morty’ References Only True Fans Will Know

Rick and Morty is a brilliant show for a whole mess of reasons. Its biting sense of humor, sci-fi appeal, and surprisingly well-rounded characters all feed into the legend of Dan Harmon and Justin Roiland’s cult hit. More than all of that though, Rick and Morty is meticulously crafted. Anyone watching closely might just notice an Easter egg here and there, but it’s not until you really dive in that you see just how dense this show is.

Every episode is jam-packed with callbacks, nods to other shows, and obscure references, all of which are hallmarks of Harmon and Roiland throughout their creative careers. Where exactly can you find these secret references in Rick and Morty? Here are some of our favorites.

1. The study group from Community makes an appearance 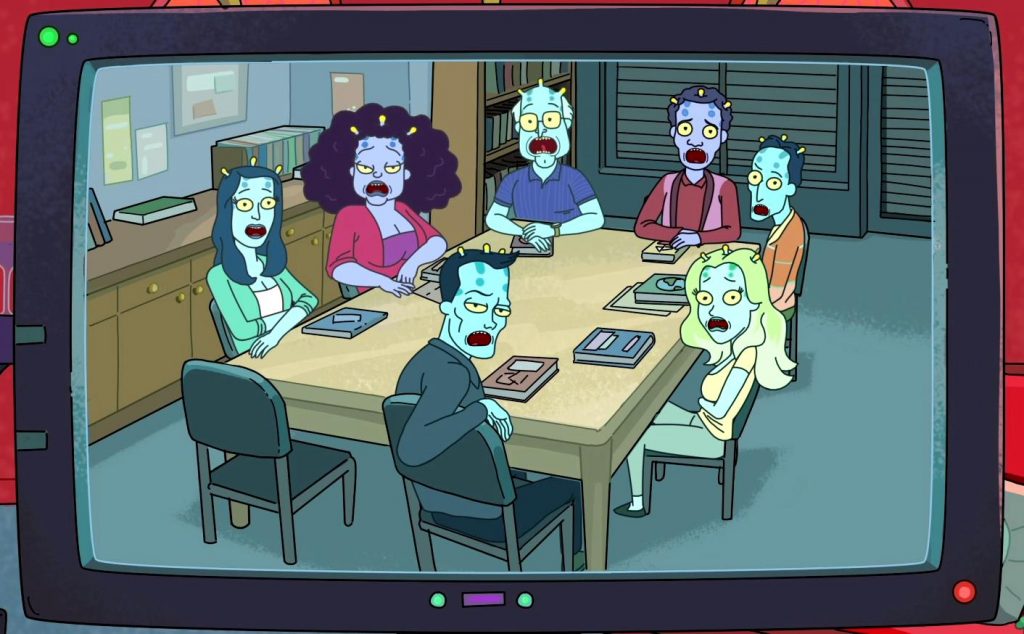 “Now make them all make fun of the blonde one. Now make them all do it on the table. Now cancel it! Now put it back on,” Rick tells Unity. On Community, the study group made a habit of making fun of Britta (the “blonde one”), Jeff and Britta had sex on the study room table, and the show was continually on the cusp of cancellation at NBC. 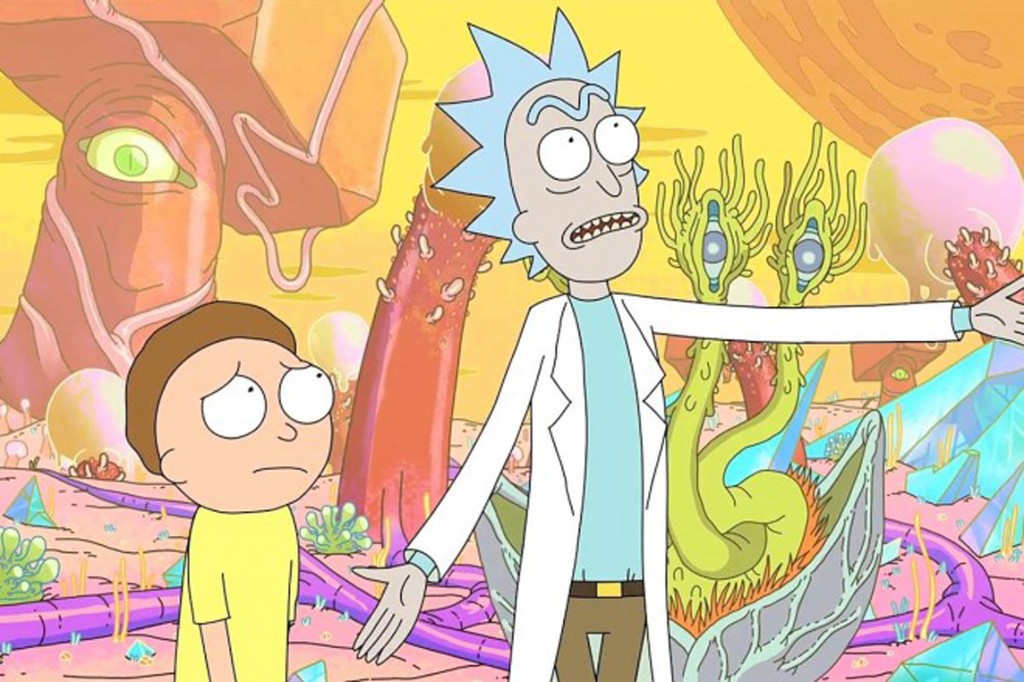 Beyond the fact that almost every episode title makes some sort of play on words using Rick and/or Morty’s names, they also reference other popular movies and TV shows. To name a few: “Total Rickall” is a hilariously bizarre homage to Total Recall, “A Rickle in Time” references the popular Wrinkle in Time novel by Madeleine L’Engle, “Lawnmower Dog” is a shoutout to the obscure 1992 film titled “Lawnmower Man,” and “Raising Gazorpazorp” is a play on the Coen brothers’ Raising Arizona. The list goes on from there, but you get the idea.

3. A direct link to Gravity Falls

Gravity Falls creator Alex Hirsch has worked with Rick and Morty co-mastermind Roiland in the past, and the two have clearly kept in touch in the ensuing years. We see subtle evidence of that in “Close Encounters of the Rick Kind,” when a notepad, a coffee mug, and a pen spill out of a portal created by Rick. This is a direct callback to an episode of Gravity Falls, where those same three items disappear into another portal (you can see the connection above).

4. The parasite from “Total Rickall” 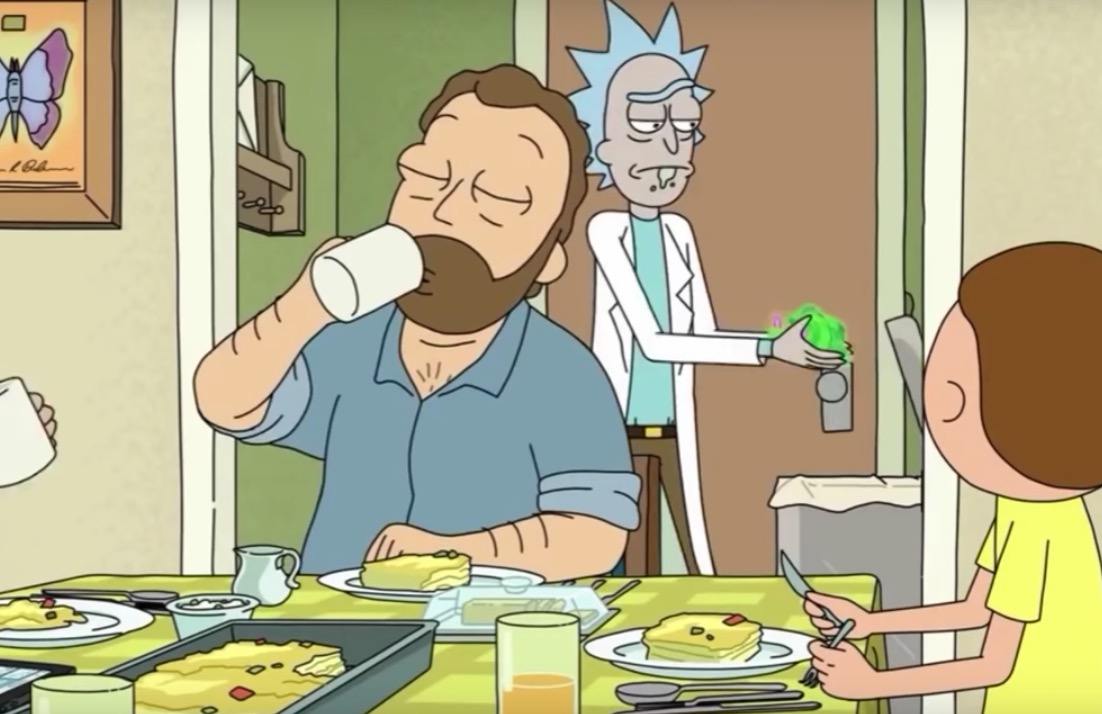 The primary story of “Total Rickall” surrounds the presence of an alien parasite, which takes the form of fictional characters from false memories it implants in its victims. At the beginning of the episode, Rick notes that someone must have “tracked them in” from one of their adventures.

As it turns out, Rick was the culprit, as described by the show’s art director, James McDermott, “If you noticed the green rocks from episode 2 [“Mortynight Run”] that Rick puts in the trunk of his ship you might have seen a couple pink eggs attached to the rocks, the same rocks Rick throws in the trash at the top of (“Total Rickall”).”

If you watch enough Community, you start to see common jokes shared by Rick and Morty. One such reference relates to Harmon’s clear hatred for Inception, a movie that Troy Barnes on Community straight up “didn’t get” and that Rick dubbed “confusing and stupid” in Season 1 of Rick and Morty.

You see another shared gag in the final season of Community, where a character in Abed’s sci-fi B-movie is named Glip Glop. “Glip Glop” pops up again on Rick and Morty, this time as an offensive term for Traflorkians. 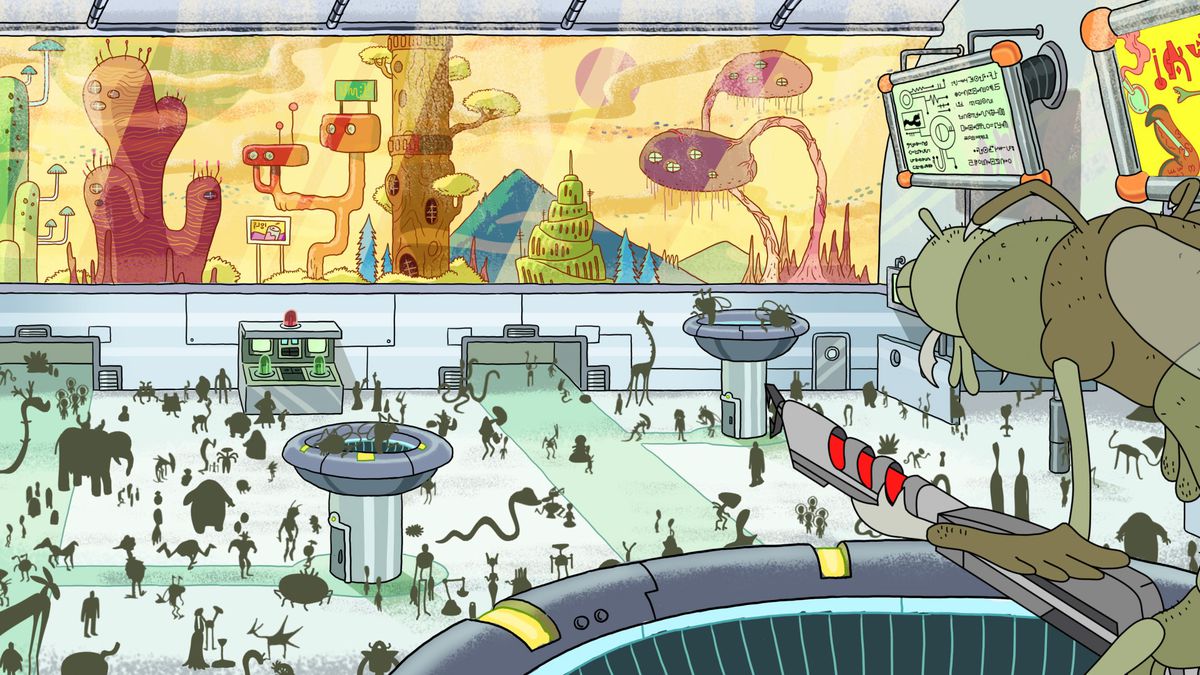 In the above frame from the Rick and Morty pilot, we get a veritable who’s who of references to other shows. Among the silhouettes, we see Mystery Science Theater‘s Tom Servo and Crow, an Alien Xenomorph, Big Bird and Snuffleupagus, a Space Invaders alien, Futurama‘s Calculon, a Prawn from District 9, Adventure Time‘s Ancient Psychic Tandem War Elephant, and lots more.

7. A Meeseeks at Blips and Chitz

In the Season 1 episodes “Meeseeks and Destroy,” Meeseeks are introduced as beings that live entirely to fulfill a single task, and once that task is complete, they ceases to exist. Season 2 gives us a brief callback to that episode, when a Meeseeks appears in the background at Blips and Chitz, helping someone beat a video game, and then disappearing forever. 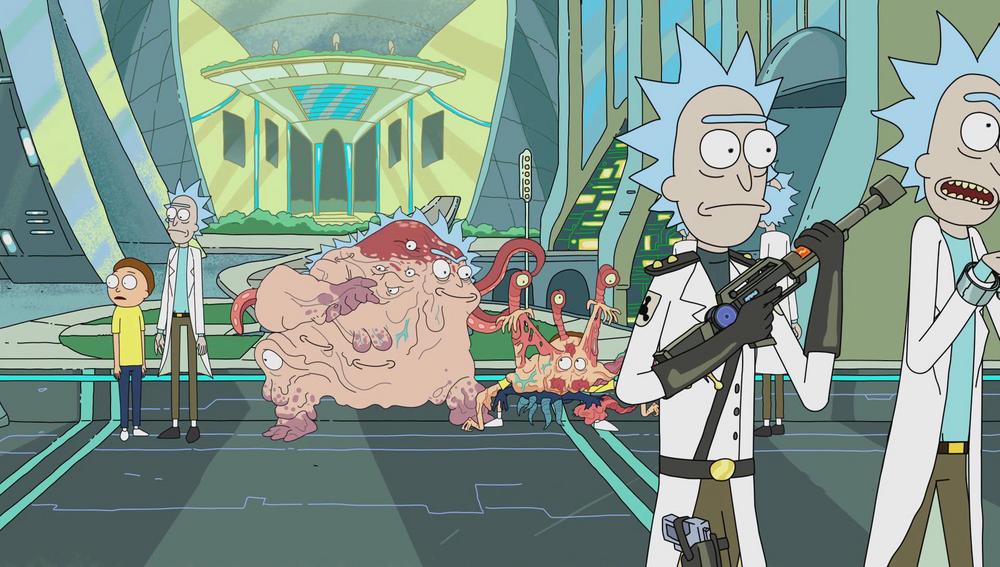 In Season 1’s “Rick Potion #9,” Rick single-handedly Cronenbergs the entire planet (itself a reference to David Cronenberg’s The Fly). In doing so, he inadvertently transforms every human into a deformed monster, and in one alternate reality, he and Morty are both affected as well.

Cronenberg Rick and Cronenberg Morty then reappear four episodes later in “Close Rick-Counters of the Rick Kind,” as card-carrying members of the Council of Ricks.

In “M. Night Shaym-Aliens!” Jerry stumbles into a virtual reality designed to feel as real as possible. When the aliens in charge discover him, they put his universe in low power mode, diverting all of their resources to tricking Rick in his own fake reality prison. The result: When Jerry turns on the radio, “Human Music” is the only song that plays, consisting solely of bleeps, bloops, and barely half a melody. When Rick drops Jerry off at “Jerry Daycare” in “Mortynight Run” the following season, “Human Music” can be heard playing over the PA system. 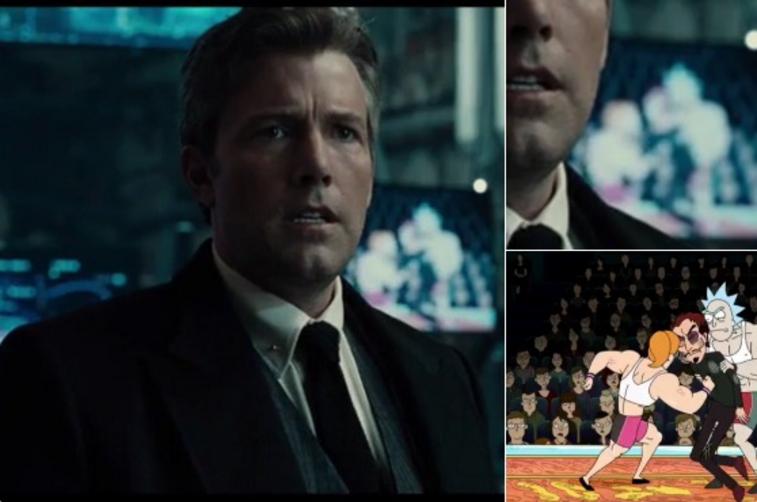 Rick and Morty in the Justice League trailer | Warner Bros.

Rick and Morty has made frequent appearances across pop culture, including a guest appearance in the opening credits of The Simpsons. The latest spotting though was in the sizzle reel for DC’s Justice League, with the end-credit tag for “Something Ricked This Way Comes” showing up directly behind Bruce Wayne.