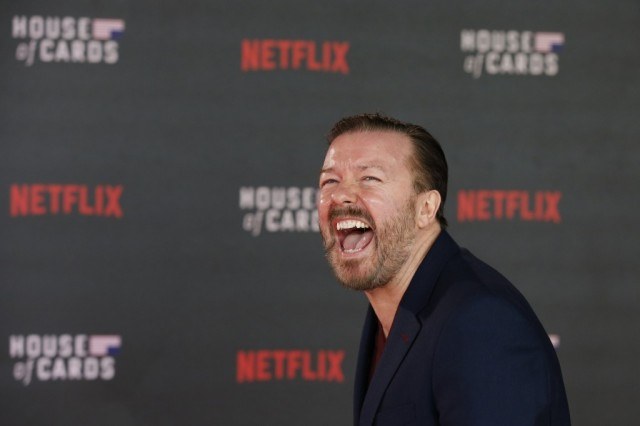 Netflix has just nabbed another notable project from a big comedy name. The streaming service has acquired the rights to Special Correspondents, an original film directed and written by Ricky Gervais.

Described as a satirical comedy, Special Correspondents is a remake of a 2009 film by Frédéric Auburtin. It will star Eric Bana (The Time Traveler’s Wife) as a struggling New York radio journalist who files fake reports from a “war zone” in order to save his job. In reality, his character is staking out in a hideout over a Spanish restaurant in the middle of Manhattan. In addition to penning and helming the film, Gervais will reportedly also appear in the movie, although specific details regarding his character remain unclear.

The film is only the latest collaboration between Gervais and the streaming service. The actor also stars in the comedy series Derek, two seasons of which were released by Netflix. A follow-up special, featuring the same characters from the show, was added to the service’s collection this month.

“Having shaken up the TV industry, Netflix is about to do the same to Hollywood,” Gervais said of the coming comedy project in a statement. “It’s great to be part of the changing future. Ted Sarandos is the new Godfather of entertainment, and he made me an offer I couldn’t refuse.”

It’s a timely film for Netflix, following the recent condemnation of several well-known reporters and the overall criticism of accountability in media. Within a matter of months, two big broadcast names, Brian Williams and Bill O’Reilly, have both had their war reporting called into question.

The project from Gervais, which was announced on Monday, is only the latest in Netflix’s recent effort to move further into feature films. Having already made its mark on television with acclaimed shows like Orange Is the New Black and House of Cards, the streaming service has now turned its full attention to movies. The Crouching Tiger, Hidden Dragon sequel, set to premiere in IMAX theaters and on Netflix in August, will mark its first original picture.

Meanwhile, the company also has a four-picture deal with Adam Sandler, including the upcoming western spoof The Ridiculous Six. In addition to its blockbuster features, the streaming service is developing a series of indie movies from the Duplass brothers.

Netflix has also stepped up its efforts to nab several high-profile projects over the last few months. In February, it acquired the Jamie Dornan-starring war drama Jadotville, and the long-awaited franchise sequel Pee-wee’s Big Holiday. In March, the service nabbed the buzzworthy Cary Fukunaga-directed film Beasts of No Nation, which is already garnering potential awards season buzz for star Idris Elba. The company is developing a series of documentaries produced by Leonardo DiCaprio as well.

Special Correspondents is only the latest of several projects that Gervais has on the way. He’s lending his voice to a character in the upcoming The Little Prince. The actor is also set to reprise his famous role as David Brent from the original U.K. version of The Office in the mockumentary-style flick Life on the Road.