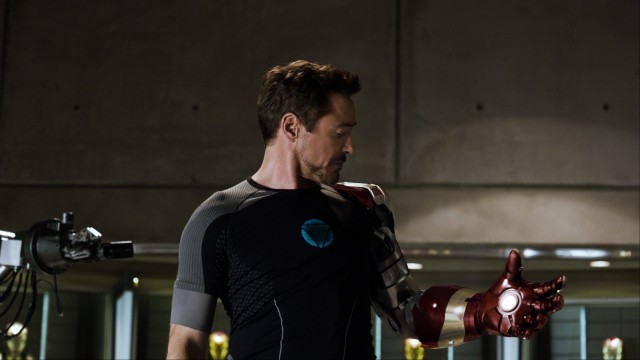 Robert Downey Jr. might not really be Iron Man, but he definitely gets a superhero-sized paycheck for playing him. The Avengers star just took the top spot on Forbes’ annual list of highest paid actors for the second year in a row.

According to Forbes’ ranking, Downey earned an estimated $75 million between June 2013 and June 2014, about the same amount that he earned last year. That’s a lot of money for any celebrity to bring in, but what makes Downey’s income even more astounding? During that year, the actor actually only appeared in one movie — Jon Favreau’s Chef, which he helped get produced and made a brief but standout cameo in. Chef has since earned $25 million at the box office, an impressive gross for a small film, but not exactly the kind of money that makes someone the highest paid actor in all of Hollywood.

Instead, the bulk of his earnings came from — you guessed it — back end of the hugely successful Iron Man 3. The third installment in the superhero franchise became both a critical and commercial success, earning over $1.2 billion worldwide and becoming the second highest grossing film of the Marvel Universe (behind Marvel’s The Avengers), as well as the second highest grossing film of 2013 (behind Disney’s Frozen.)

The incredible reception for the film gave Downey the leeway not only to help much smaller movies like Chef to get made, but also to hold out during negotiations for the upcoming Avengers: Age of Ultron movie. Per Forbes, Downey secured more money than ever upfront for the film and is set to make even more after its debut.

It’s quite a turnaround for an actor who was still being called “The Comeback Kid” only four years ago. Downey was arrested several times and fired from Ally McBeal for his involvement with drugs in the early 2000s. After a three-year probation and some time in a court-ordered rehab facility, he slowly began making his ascent back up the Hollywood food chain, eventually earning his place at the top with his first huge blockbuster role as Iron Man in 2007. Since then, he’s proved himself indispensable to Hollywood and to Marvel.

While other action franchises have seen their lead actors, it’s abundantly clear both to the world, and especially to Marvel (as evidenced by his paycheck), that the Iron Man and Avenger films would suffer greatly without Downey reprising his role. If anything, they only seem to be increasing his participation, with his character playing a key part in the upcoming Avengers: Age of Ultron.

Still, Downey isn’t the only actor to rake in the big bucks. Dwayne Johnson comes in second with an estimated earning of $52 million. While he may not have played a superhero just yet, Johnson has participated in other major franchises like the Fast and Furious and he’s also set to take the lead role in Hercules (out this month.)

Meanwhile, Bradley Cooper comes in third, earning an estimated $46 million, thanks to a mix of blockbusters like The Hangover follow-up and Oscar-friendly picks like American Hustle. Leonardo DiCaprio follows him with $39 million in earnings from flicks like The Great Gatsby and The Wolf of Wall Street and Downey’s fellow superhero-playing actor, Chris Hemsworth, rounds out the top five, garnering an estimated$37 million in the past year, largely from the Thor sequel, The Dark World.