‘Rogue One’: 8 Things We Learned From the New Trailer

The promotion cycle for Rogue One: A Star Wars Story has slowly been ramping up in recent months, brought on by the release of toys, reports from the set, and now, another full-length trailer packed with brand new footage and story details. This time around, we’re getting a nice long look at what appears to be the basic outline of Rogue One‘s story. It’s all being delivered in the form of a two and a half minute feast of information, and now that we’re approaching the final countdown for the film’s release, it couldn’t have arrived at a better time.

So what exactly did we see? Let’s dig in and break everything down.

1. Galen Erso and his role in building the Death Star 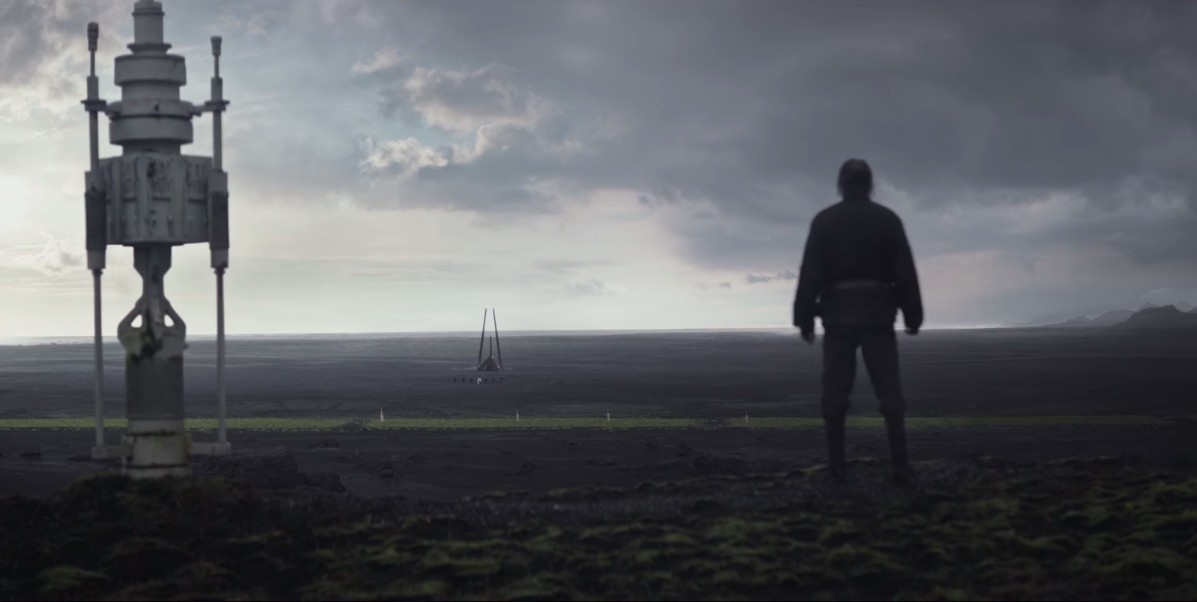 Mads Mikkelsen as Galen Erso in Rogue One: A Star Wars Story | Lucasfilm

There’s been a lot of discussion around what exactly Jyn Erso’s father’s role is in Rogue One. The predominant theory up until now has been that he’s one of the key architects of the Death Star, and that seems to be confirmed by the the latest trailer. It opens up with Galen (Mads Mikkelsen) getting taken away by Director Krennic and the Empire while Jyn is still just a small child. It’s clear that he’s not going willfully, but is assisting the Imperial cause as a means for keeping his family safe.

The frame above shows Galen directly before his capture. The implication seems to be that this is the last time his daughter will see him until she’s fully grown, which incidentally gives her plenty of reasons to join the Rebellion years later.

2. The Rebellion rescues Jyn Erso from an Imperial prison

In the years since her father was taken, it’s clear that Jyn (Felicity Jones) has spent years making trouble, eventually landing in an Imperial prison. As the Rebellion begins to learn of her father’s role within the Empire, they rescue her in hopes that she’ll be able to lead them to Galen. This all leads down a path of intriguing head-cannon, and a whole lot of questions to boot.

Was Galen Erso the one who designed the Death Star’s vulnerable exhaust port in an effort to assist the Rebellion in destroying it? Where was Jyn at the beginning of A New Hope? We’ll hopefully get all the answers we seek and more come Rogue One‘s release, but for now we’re left guessing.

3. The remnants of the ancient Jedi Order

It’s easy to miss, but a brief moment from the trailer shows us an overhead shot of what looks like a buried statue of a Jedi clutching a lightsaber. We already know that a portion of Rogue One takes place on Jedha, a planet said to be the ancestral home of the Jedi Order. Based on what we saw in the trailer, we’ll see remnants of their long-past presence on the planet. Jedha also happens to hold massive stores of kyber crystals, the element Jedi used to construct their lightsabers. For the Empire, they’ll look to use them for a more nefarious reason: As a power source for the destructive super-laser attached to the Death Star.

4. Hey that’s the title of the movie

Riz Ahmed in Rogue One: A Star Wars Story | Lucasfilm

There’s been a fair bit of guessing as to why the movie is actually called Rogue One, and we now have a solid answer: It’s the call sign for Jyn Erso’s team. It falls in line with what most fans assumed already, but it’s nice to know for sure all the same, even if it was revealed before the movie actually came out. What’s interesting is the way that the call sign seems to almost randomly get assigned to Jyn and company, with Riz Ahmed’s character pulling the name out of thin air after getting put on the spot.

5. The Empire and the jungles of Scarif

The Imperial facility on Scarif in Rogue One: A Star Wars Story | Lucasfilm

Among the cadre of new Star Wars locales in Rogue One is Scarif, the planet housing the Empire’s closely-guarded Death Star plans. It also happens to be the setting for Battlefront‘s final DLC, so fans better get familiar now, because come December, they’ll get to storm the beaches themselves in the popular video game.

It is on Scarif that we expect to see Rogue One‘s climactic battle, where our Rebels will be tasked with tracking down the Death Star plans and saving the galaxy. And if some AT-AT’s show up along the way, we won’t be at all upset …

In the first full-length Rogue One trailer, we got to see Jyn Erso donning an Imperial uniform, although it was not entirely clear why. Now we have that answer, as we see her wearing the same uniform alongside Cassian Andor and the repurposed Imperial droid, K-2SO. The trio will look to infiltrate an Imperial facility that we can only assume is the same one we saw above on Scarif. Acquiring the Death Star plans obviously won’t just be a knockdown drag-out battle; it’ll require a good deal of subterfuge, and that’s what we’ll be getting when Jyn and Cassian go undercover.

7. Yes, there will be a space battle

Space battles are as much a part of the Star Wars saga as the Jedi and Sith, and Rogue One certainly won’t be short on that quality in the slightest. Above, we see a massive-scale dogfight in the atmosphere above Scarif, as part of what appears to be a two-pronged attack against the Empire while Cassian and Jyn Erso sneak inside under the radar.

Given that most of the dogfighting we got in The Force Awakens was on a considerably smaller scale, it’ll be exciting to see Star Wars recommitting to one of the most exciting aspects of the franchise in Rogue One.

Anytime Darth Vader is briskly walking toward you, odds are it’s not going to end well. Here we have the dark lord striding toward Director Krennic, looking like a Sith on a mission to Force-choke the next person who disappoints him. We already know Vader’s propensity for killing Imperial employees that displease him, and given the fact that Krennic seems to be the one in charge of keeping the Death Star plans out of Rebel hands, we don’t see a happy ending for the Director in Rogue One. Of course, anything that gives us more Darth Vader is perfect, even if it might come at the expense of Ben Mendelsohn.