After a flurry of cancellations from the major networks, there is some positive news. Fox recently announced that they’re picking up Tim Allen’s canceled sitcom, Last Man Standing. This came after NBC recently picked up Fox’s canceled series, Brooklyn Nine-Nine. But fans of the show will certainly be happy, given the circumstances surrounding Last Man Standing‘s cancellation following its sixth season.

Going one step further, Fox was clear about one big reason they felt comfortable getting on board with Allen’s series. Let’s take a look at that reason, plus a little background on what happened between Allen, ABC, Fox, and Last Man Standing. 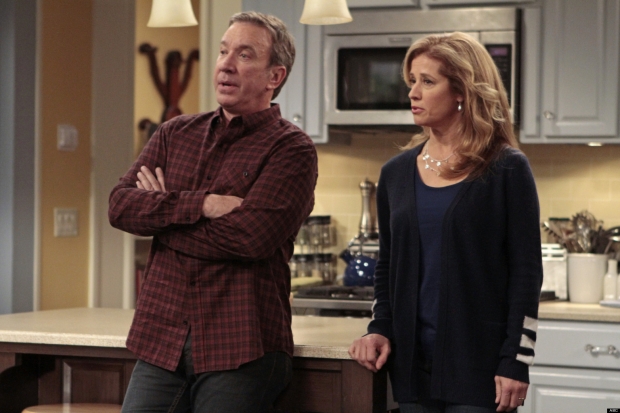 Over 130 episodes in six years, Last Man Standing became extremely popular among its target demographic. It has a rating of 7.5 out of 10 on IMDB and 83% among audiences on Rotten Tomatoes, which is impressive. Especially so, when considering that the critical reviews were not so good when the show first premiered. Over the life of the show, Last Man Standing was averaging around eight million viewers per episode.

But in May 2017, ABC decided to cut Last Man Standing loose. Several reasons were given at the time, and many were understandable. From a network standpoint, if a show isn’t a hit after five years, it’s time to wrap things up. Despite the solid ratings, six seasons of Last Man Standing hadn’t produced a major hit for ABC.

But that’s not the biggest reason it was canceled, nor is it the reason many of the show’s fans believe Allen was taken off the air.

Next: What the fans believe

Conservative fans of the show were angered by its cancellation. | ABC

Not long after Last Man Standing was canceled, there were fans creating a petition at Change.org to get the show back on the air. The belief was that liberal Hollywood had killed a show that skewed heavily to the conservative point of view, with Allen’s character frequently taking shots at Barack Obama and what he perceives to be political correctness run amok.

“Last Man Standing is one of the only shows on broadcast television, and the only sitcom, that is not constantly shoving liberal ideals down the throats of the viewers,” according to the petition.

Whether or not the show was canceled because of politics is impossible to prove, but ABC responded quickly in an attempt to dispel the notion. However, Last Man Standing‘s biggest star wasn’t convinced.

Next: What Allen thought about it

Allen fans the flames of outrage

Allen, who hasn’t been shy to share his far-right ideas in public, once got in trouble for comparing being a Republican in Hollywood with the early days Nazi Germany. He also told then-Fox News host Megyn Kelly that those who supported Donald Trump were being bullied for doing so. Speaking to Norm MacDonald after Last Man Standing was canceled, Allen admitted that he didn’t buy ABC’s logic.

I always wanted Last Man Standing to be like [All in the Family‘s] Archie Bunker. Archie Bunker pushed boundaries, but Carroll O’Connor was not that guy at all. I am a version of that guy. But there is nothing more dangerous, especially in this climate, than a funny, likable conservative character. He is mitigated on the show by a family of women who had a difference of opinions, but [Mike Baxter] was a likeable guy and a principled guy about work and ethics and all this stuff, I think.

Allen’s comments only served to further inflame the tensions between the network and the fans of Last Man Standing, many of whom consider themselves to be conservative. But a year later, there is light at the end of the tunnel.

Next: A revival on a new network

The show has found a new home. | ABC

Along with a slew of shows being cut from the fall schedule, Fox made a surprising move in picking up Last Man Standing. Apparently, the studio had wanted to grab onto the show when ABC canceled it last year, but simply didn’t have a place for it on the schedule.

“We always wondered how it would do if it was prioritized more,” said Fox Television Group chair Dana Walden. On the topic of the cancellation, the network was quick to point to the fact that it was their studio, not ABC’s, that actually owned the show.

For ABC to continue running Last Man Standing and paying Fox for the rights would’ve been an extremely expensive move.

Next: What sold Fox on Last Man Standing

According to those at the network, ABC’s success with the Roseanne reboot — another sitcom featuring a lead character with conservative views who often clashes with liberal relatives  — actually sold them on picking up Last Man Standing. The idea of grabbing a series with an established fan base and featuring a star such as Allen probably helped their decision, as well.

“Obviously, I think everyone took a good hard look at the performance of Roseanne. It did so well, and it certainly did remind us that we have a huge iconic comedy star in our Fox family in Tim Allen,” said Walden. “[Last Man Standing] is a really funny show.”

Roseanne had 18 million viewers in its premiere, thanks to having been off TV for over 20 years and the promise of Trump-related political commentary in the pilot. The ratings dropped in subsequent weeks, but still held strong for ABC.

Next: Talking points versus the truth

There’s much more to Roseanne than politics

Although President Trump has taken credit for the excellent ratings on Roseanne, the truth is that politics have often taken a backseat to more natural stories. In fact, the president’s name has never been spoken on the show. And while Roseanne has certainly delved into politics at times in 2018, it’s usually without the perceived conservative slant. In one episode, Roseanne Conner gets her comeuppance for her distrust of her new Muslim neighbors.

The notion that Roseanne is a hit because of the title character’s more conservative views disregards several other reasons for its success. That includes clever, nuanced writing and the nostalgia factor. It doesn’t appear that the people at Fox believe that politics is specifically what will help resurrect Last Man Standing, but some are already contending that is a factor.

As with all business decisions where millions of dollars are at play, Last Man Standing‘s cancellation at ABC was more about economics than Allen’s political views. While the show did have a true conservative bent to it, the reality is that it was costly for ABC. Here is an explanation from Vox from May 2017:

Since ABC doesn’t own the show, it doesn’t get any of the show’s ancillary revenues from streaming services and syndication and cable reruns and international broadcasts. Those all go to the studio, Fox. ABC pretty much just collects ad revenue at this point.
Thus, ABC has no incentive to keep making more episodes of the show from a financial perspective, where Fox has huge incentive to do so.

It’s interesting how this commentary seemingly predicts that Fox would, at some point, wise up and pick up the show for themselves. The success of Roseanne probably provided some sort of assurance as well, but it’s clear that Fox was already in a no-lose situation in reviving Last Man Standing.