Royal Baby No. 3: Everything We Know About Kate Middleton’s Shocking Pregnancy

Kate Middleton and Prince William have a pretty adorable family with Prince George and Princess Charlotte. But once again their family is growing as she is expecting again, and there are some interesting details that have been released.

The Dutchess of Cambridge previously had a hard time with pregnancy due to health issues, so how will this one affect her? What has the royal family said about the big news? And what exactly does this mean about the line of succession? What are the possible baby names?

We decided to answer all of those questions. Let’s take a quick look at what we know about Kate Middleton’s shocking pregnancy with baby No. 3.

The baby news has been released through Kensington Palace

The palace gave a statement announcing the big news. “Their Royal Highnesses The Duke and Duchess of Cambridge are very pleased to announce that The Duchess of Cambridge is expecting their third child,” read the statement. “The Queen and members of both families are delighted with the news.”

She is reportedly less than three months pregnant, but the early announcement was made due to her illness. This will most likely affect her schedule in the future given she has had a hard time with pregnancy in the past due to Hyperemesis Gravidarum.

The statement confirms this by saying she is going to miss her appearance at the Hornsey Road Children’s Centre on Monday. Kate Middleton has previously been hospitalized for the very same sickness during her other pregnancies.

Next: Why it has been a tough pregnancy on the duchess

The duchess is once again suffering from acute morning sickness

The statement from Kensington Palace confirmed that this will be another tough pregnancy for the royal. “As with her previous two pregnancies, The Duchess is suffering from Hyperemesis Gravidarum,” read the statement. “Her Royal Highness will no longer carry out her planned engagement at the Hornsey Road Children’s Centre in London today. “The Duchess is being cared for at Kensington Palace.”

Next: Prince Harry provides a quick update on Kate Middleton.

The uncle is happy for the growing family. He was in Manchester when he said the news is “fantastic, great. Very, very happy for them,” according to People. He also claimed that Kate Middleton is “okay” considering her condition. “I haven’t seen her for a while but I think she’s okay,” he continued.

Next: This pregnancy could heighten her symptoms.

This third pregnancy could heighten her symptoms

ABC News talked to Dr. Jennifer Ashton, a practicing OB/GYN and senior medical contributor, about Kate Middleton’s condition and found that the symptoms of Hyperemesis Gravidarum can change with every pregnancy.

“Sometimes subsequent pregnancies have it starting sooner, lasting longer and being more severe,” Ashton explained, and she also said the morning sickness is “like a hurricane is a little bit of rain.”

Next: They have talked about having more kids.

Prince William and Kate have talked about having more kids

Some are surprised by the baby news, but the royal couple has made it known that they want more kids. Back in July, they were in Warsaw when Kate Middleton was given a gift fitting for a newborn. Kate Middleton joked, “We will just have to have more babies.”

Next: Royal baby No. 3 will not pass Charlotte on the way to the throne.

Historically, boys had a first call to the throne. But now rules have changed and due to that Charlotte wouldn’t be displaced in the line of succession if this new baby is a boy, according to People. So if for some reason it’s Charlotte’s turn to have the throne and she has a little brother this will be a historic first.

Next: Where will Prince Harry be in the line to the throne?

Prince Harry will now be sixth in line

For those who aren’t clear where Prince Harry falls in the line of succession now, he is the sixth in line to the throne. The days of him getting married and starting a family might be on the horizon. He is still dating Meghan Markle, and they seem very serious.

Next: Here’s why Kate Middleton might be having a girl. 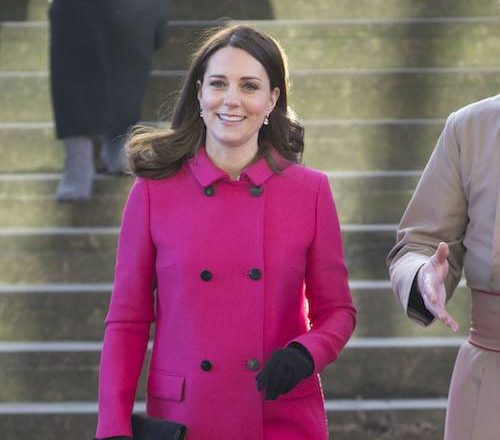 Is her coat a sign? | Heathcliff O’Malley/WPA Pool /Getty Images

The royal couple recently headed 100-plus miles northwest of London to visit the English city of Coventry and perform some royal duties. Kate Middleton ventured out in a hot pink Mulberry coat as an accent, along with her black clutch, gloves, stockings, and heels.

Media outlets were quick to point out that she has worn the coat previously — and that the duchess is one to recycle some of her favorite looks. But what’s significant is that the last time she wore this particular coat was when she was pregnant with Charlotte.

Next: This wouldn’t be the first clothing signal the duchess has sent.

Kate Middleton has used clothing as a signal in the past

She could be leaving us clues. | Wochit Entertainment via YouTube

Kate Middleton, our generation’s royal fashion inspiration, makes as many headlines for her royal duties as she does her style. She’s been rightfully called the “ultimate fashion diplomat,” and designers will drop everything to dress the duchess.

It’s not far-fetched to venture a guess that Kate Middleton is using her coat to signal her baby’s sex. She has used clothing to promote positive foreign relations, after all. She wore Canadian-born British designer Erdem Moralioglu’s fashions at the start of her royal tour in Ottawa, sported Chanel for the first time on a visit to Paris, and wore a dress by Polish designer Gosia Baczynska to an event in Warsaw.

Next: The favorite baby names in the running for royal baby No. 3.

For now, we’ll have to wait and see

We can’t wait to find out. | Chris Jackson/Pool/Getty Images

Kate Middleton is due in April, so it’s feasible she’ll have her third child right before Prince Harry and Meghan Markle’s wedding. While traditionally the royal family doesn’t announce a pregnancy until three months before the due date, royal correspondents believe Kate Middleton was forced to announce her pregnancy after missing multiple royal engagements due to difficult bouts of morning sickness, according to The Sun.

And bookies have speculated the third baby’s name for both sexes. The winning male names are Arthur, Henry, and Albert, and the winning female names are Alice, Victoria, and Elizabeth, The Sun reported.