Last week, Meghan Markle and Prince Harry embarked on their first official royal tour together. The lovebirds — and parents-to-be — headed down under to Australia ahead of the 2018 Invictus Games. And, while they met with athletes, members of the community, and state officials, Meghan Markle wore some of her most stylish (and eco-friendly) looks to date. That said, many of Meghan’s outfits went against the strict royal style rules the queen has in place for official engagements.

Here are some of the royal style rules Meghan Markle broke while on the royal tour of Australia. 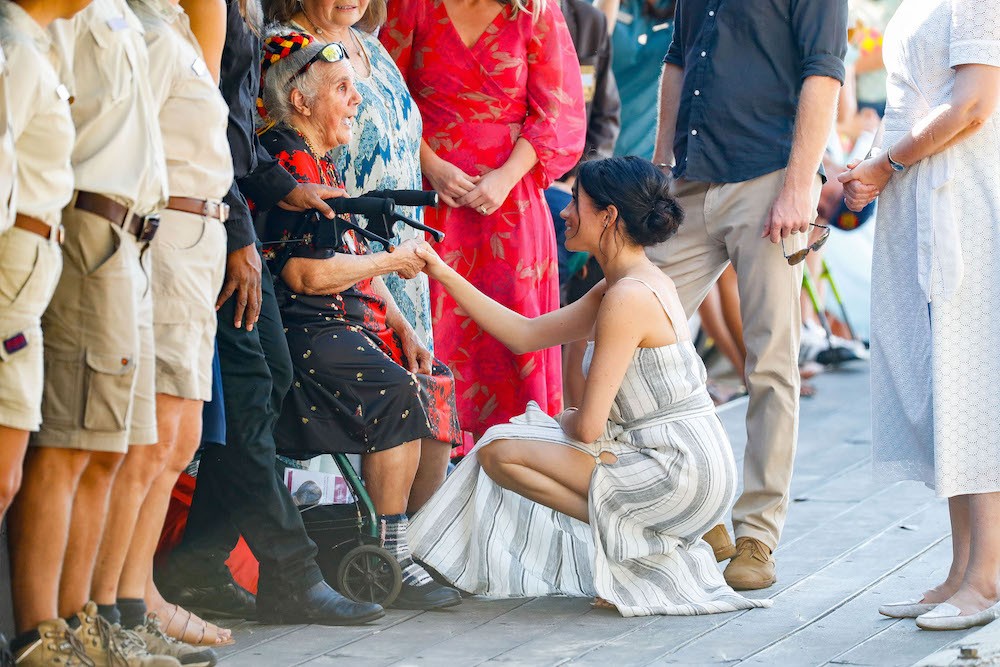 While visiting Fraser Island, Meghan Markle stepped out in the ultimate vacation number: A lightweight, spaghetti strap Reformation dress. But, although we love the look, the queen probably didn’t approve of it. According to royal style rules, members of the family must dress modestly when on official family business. That means no spaghetti straps.

Speaking of dressing modestly, Meghan Markle’s Reformation dress also featured a very high, revealing slit. And, when she bent down to greet fans, her thigh was revealed. While it’s not the end of the world, the queen likely won’t approve of the look. 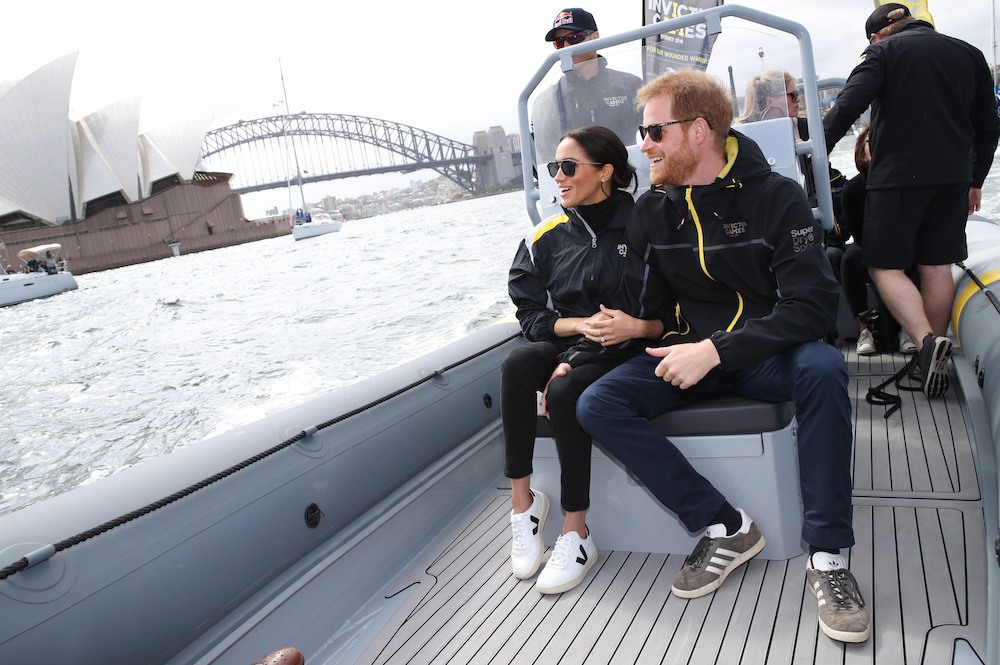 Casual clothing is not permitted, according to royal style rules. | Chris Jackson/Getty Images for the Invictus Games Foundation

The queen would prefer members of her family to avoid casual clothing while on an official engagement. However, this rule is often broken by her grandchildren (including Kate Middleton) — especially since they like to get involved in sporting events and activities. Meghan Markle was photographed in her most casual look to date while cheering on sailors in the Invictus Games. 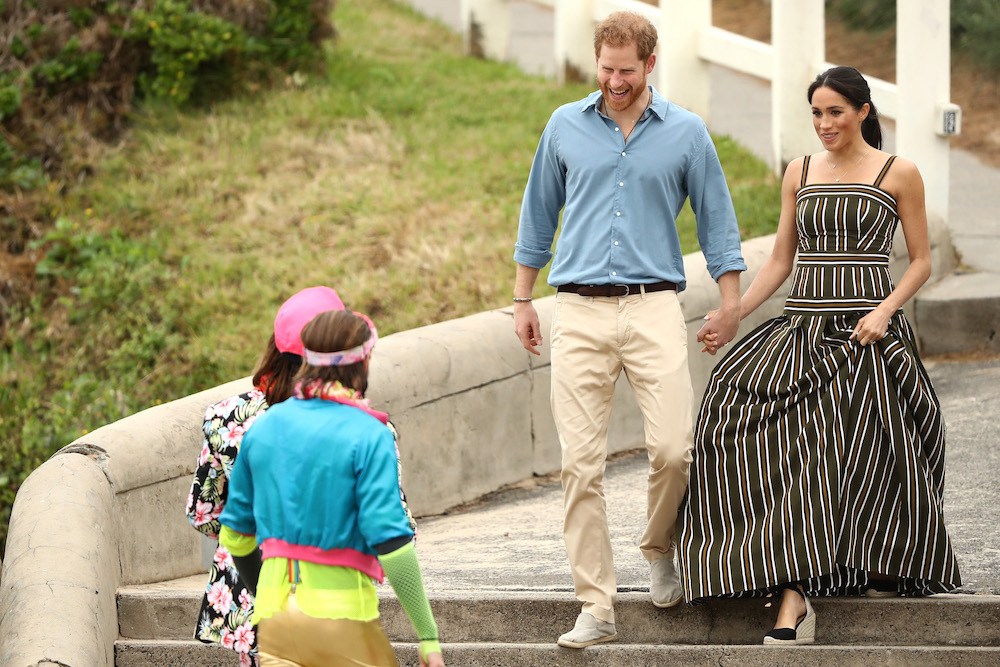 Queen Elizabeth II reportedly hates wedged heels. So, Kate Middleton and Meghan Markle typically avoid wearing them around her majesty. However, while visiting Bondi Beach, Meghan Markle revealed her wedged espadrilles — a bit royal style rules no-no. That said, her sister-in-law regularly breaks this rule, as wedged heels are one of her favorite shoe styles.

Last night The Duke and Duchess of Sussex met #InvictusGames competitors at a @weareinvictusgames reception at Government House in Sydney, hosted by @governornsw — follow @invictusgames2018 for all the latest from the Games! Salty Dingo Media #GameOnDownUnder #Invictus #RoyalVisitAustralia #Australia

Keep your outermost layer on

According to royal style rules, women in the family must keep their outermost layer (coats) on at all times. That’s why you always see Kate Middleton, Meghan Markle, Camilla Parker Bowles, and the queen in a jacket — even if it’s warm out. That said, in a series of photos posted on Kensington Palace’s Instagram account, it appears as though Meghan Markle removed her jacket while enjoying a reception for the Invictus Games at Government House in Sydney. However, it is likely she showed up without a jacket and added it later as she got cold.

Meghan also appeared to remove the oversized plaid blazer she wore upon arrival to the Woodleys (a local farming family) in Dubbo earlier that week.

"You are the salt of the earth – honest, hardworking and as tough as they come. And that resilience, sense of humour and commitment to the land are the qualities that make you unique. You are the backbone of this country." — Thank you to everyone that came out in the rain in Dubbo to meet The Duke and Duchess of Sussex! #RoyalVisitAustralia #Australia #Dubbo

Hair must always be neat

The queen has a thing about unkempt hair. Which is why Kate Middleton often opts for hairnets to keep certain styles in place — especially in the rain. While in Dubbo, the Duke and Duchess of Sussex got caught in the rain (which made for some swoon-worthy pics of them!) and Meghan’s low ponytail appeared to take some of the hit. While it might not be a big deal to most (after all, it’s only hair), the queen would probably have preferred to see Meghan’s hair in a low bun, secured by a hairnet to keep things in place. 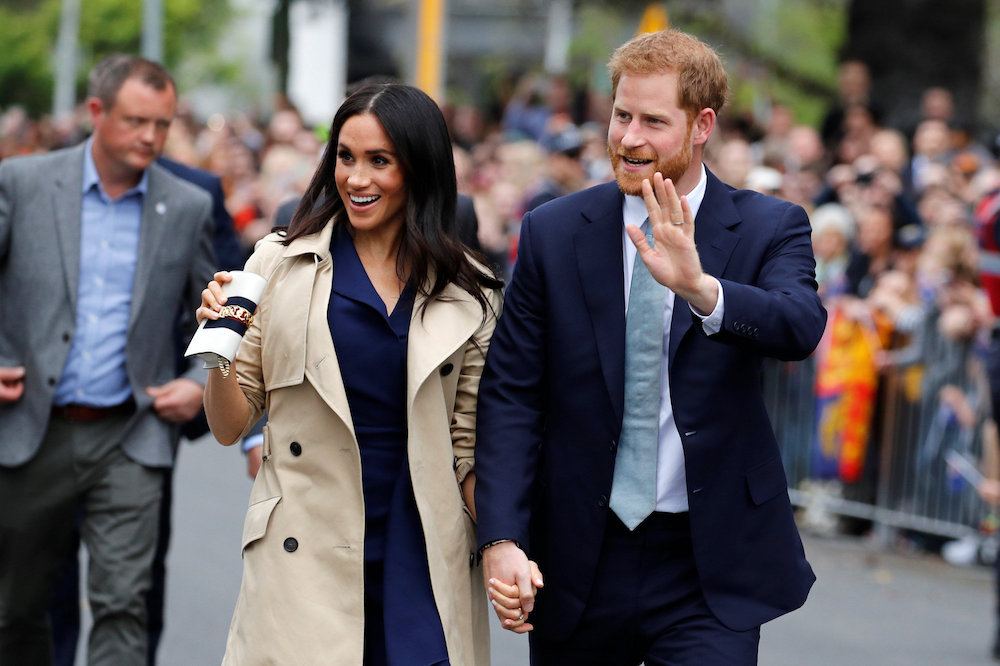 In royal style rules, modesty is key. Which is why many royals avoid plunging necklines and showing too much skin. But, while visiting the Royal Botanic Gardens in Melbourne on the royal tour of Australia, Meghan appeared in a v-neck dress. While it’s not the most revealing look of the trip — see: the dress she wore to Fraser Island — it is borderline against the queen’s style expectations.