Despite all its apparent glamour and wealth, the movie industry can wreak havoc on even the strongest romantic relationships. Ben and Jennifer, Tom and Katy, and Brangelina are disappointing proof of that. For this and other reasons, it’s refreshing to see a showbiz marriage that stands the test of time. Sam Elliott and Katharine Ross are a Hollywood love story worth celebrating.

The times they almost met

Katharine Juliet Ross grew up in Walnut Creek, California, less than 100 miles from the Sacramento childhood home of Samuel Pack Elliott. Ross, who is four years Elliott’s senior, graduated from Las Lomas High School in 1957 and moved across the bay to San Francisco around the same time that the Elliott family moved north to Portland.

Sam and Katharine’s paths could have crossed on the set of Butch Cassidy and the Sundance Kid, but they didn’t. In the 1969 movie, Ross portrayed leading lady Etta Place to Paul Newman and Robert Redford’s title characters, and Elliott was merely an extra in a bar scene. Credited as “Card Player #2,” the 6’2″ actor noticed the winsome brunette, but felt that the Oscar-nominated star of The Graduate would not be interested in dating ‘a glorified extra,’ he explained to AARP magazine.

The face-to-face meeting that sparked one of Hollywood’s most enduring love affairs finally happened in 1978, when Elliott and Ross worked together on a movie in London. Directed by Richard Marquand, The Legacy placed the actors together in what one critic called a ‘lumbering occult thriller’ full of ‘supernatural chicanery.’ Neither star received an Oscar nod for the 100-minute fog drenched horror flick, but the pair were madly in love before filming wrapped.

The fifth time was the charm 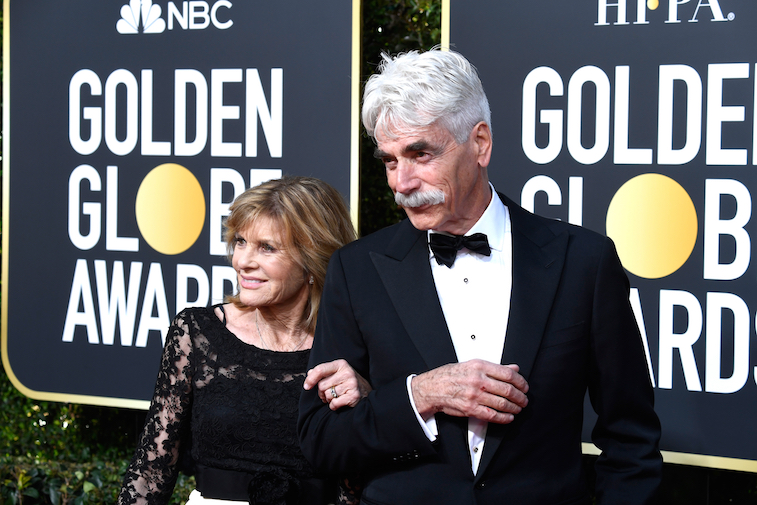 During the making of The Legacy, Ross was married to her fourth husband, Gaetano “Tom” Lisi, whom she’d married in 1975 when he was a chauffeur on the set of The Stepford Wives. Prior to Lisi, Ross had been married to actors Joel Fabiani and John Marion as well as Oscar-winning cinematographer, Conrad Hall, whom she met while filming Butch Cassidy and the Sundance Kid. Elliott had never tied the knot with anyone.

One look at the handsome couple easily explains their mutual attraction on the movie set. The epitome of long-haired, Woodstock-era beauty, Ross found Elliott’s mustache, baritone voice, and rugged good looks irresistible. In Ross, Elliott found someone with whom he shares a common sensibility. Ross divorced Lisi in 1979 and married Elliott just weeks before the arrival of their only child, Cleo Rose Elliott.

Since their wedding in May 1984, Elliott and Ross have been very supportive of their mutual movie careers. In fact, Ross urged her husband to cut their Hawaiian honeymoon short so he could accept the role as Cher’s motorcycle-riding love interest in the 1985 movie, Mask. When Ross learned that Elliott had told his agent he would not be able to make the audition, it was she who returned his call and promised to get her husband back to Hollywood on time.

A year after their nuptials, Elliott encouraged Ross to join the cast of Dynasty spin-off, The Colbys. The series, which also starred Charlton Heston and Ricardo Montalban, aired for two seasons. After a two-year television run, Ross returned to the big screen in numerous films, including the critically acclaimed Donnie Darko.

As if movies weren’t enough to keep the happy couple busy, Elliott and Ross each do a fair amount of voice-over work. Elliott’s rich baritone famously declares that it’s beef for dinner on behalf of the American Cattlemen’s Association, and Ross provides voices for animated characters on American Dad and Family Guy.

After 34 years of marriage, Ross and Elliott are still going strong. They’re acting together again, too. In 2017, the couple merited rave reviews as a divorced couple in the independent comedy, The Hero. This year, Elliott lights up the silver screen with Lady Gaga the Bradley Cooper remake of the 1937 classic, A Star is Born.

How did they last so long?

Elliott explains that marriage is something one doesn’t walk away from. “We work at being together,” he told AARP magazine. “You work past the sh*t. You don’t walk away from it. That’s how relationships last.”

Today, the devoted partners in one of Tinseltown’s most successful pairings divide their time between their beach side Los Angeles home and a spacious spread in Oregon’s Willamette Valley.