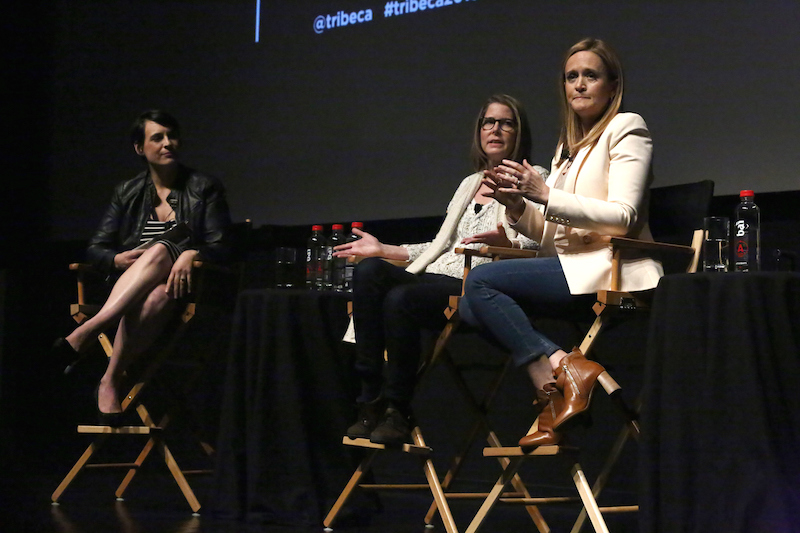 Samantha Bee has been busy shaking up late night with her weekly TBS series, Full Frontal, since its February premiere, but it’s clear that the TV host is only just getting started. In a Tribeca Tune In panel on Tuesday night, Bee and executive producer Jo Miller talked about finding the right tone for the show, using their gut to hunt for stories, and taking on election season.

During the discussion, Bee revealed how she and Miller came up with the format for Full Frontal pretty quickly. “I think we knew that we wanted to do it once a week, for sure. We knew that would give us the chance to dive into things in a different way,” she said, adding that the week in between episodes also allows time for field pieces, which are “really important…[but] very difficult to do and extremely time-consuming.” The duo also knew from the get-go that they wanted to limit the series to a half hour in order to “leave people wanting more.”

But nailing the tone of Full Frontal took a little more work — and according to Bee, it all started with the musician, Peaches. As fans know, Peaches’ “Boys Wanna Be Her” is the theme song for the late night series and the tune actually played a significant part in the early formation of the show. After Bee got permission from the artist herself (via a Twitter Direct Message!), she and the rest of the crew began using the song as inspiration. “When we had people designing our set and opening titles and stuff and they wanted to know the feel of the show, we’d just play the song,” Miller said.

Bee’s wardrobes choices were also a point of discussion while formulating the series. As the host revealed, she purposely shies away from dresses and skirts after a disastrous test episode, in which she felt — and reportedly looked — visibly uncomfortable in a dress. Since then, she has settled on a signature sneakers-and-“power blazers” combo, which she says works much better for the physicality of her comedy. ” “I don’t know why I ever thought that I could do that in a dress,” she said.

Now, that the show has found its groove, Bee and Miller say they have a “follow your gut” attitude for parsing through the news to find the right stories to cover and the right way to cover them. “The show comes out of a place of passion. That’s the other thing we constantly talk about is the show would come from a really gut level – I like to say my swamp,” Bee said, laughing. Miller agreed, adding, “You know a Full Frontal story when you see it. ”

Some of these stories, as we’ve now seen, are having a real-life impact outside of the show. In March, Bee did a segment (above) discussing the thousands of untested rape kits currently backlogged across the United States. She specifically called out Republican state senator Renee Unterman for blocking a bill that required Georgia law enforcement to find, count, and test the evidence in the kits. The segment drew a lot of attention — perhaps even from legislators, who worked around Unterman to get the proposal passed shortly after. “It got passed…and the supporters were tweeting at us and letting us know,” Miller said of the impactful moment.

Next up, Bee and Miller will be taking on the political conventions, which both expressed excitement for. Bee, a Canadian native, voted for the first time earlier in the day and says being part of the political process, instead of just outside of it, feels right to her. “You spend a lot of years going to conventions and being in it but not of it. It felt weird to me,” she said. “It didn’t feel right, so now everything feels proper.”

TBS recently extended Full Frontal from 13 to 39 episodes, carrying the season through the end of 2016.