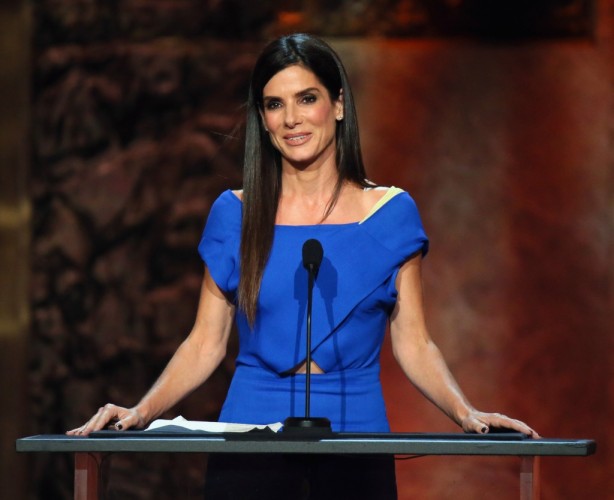 Sandra Bullock is officially attached to star in an upcoming movie following the rise and fall of Tupperware marketing exec, Brownie Wise. Sony just signed a deal to acquire the still-untitled project, set to be helmed by The Help director Tate Taylor.

According to The Hollywood Reporter, Sony won the project after an intense bidding battle between several major studios, including Warner Bros. and Paramount Pictures. The interest in the film isn’t surprising, especially given that it’s the first confirmed role that the Academy Award-winning Bullock has taken on since her critically acclaimed and Oscar-nominated performance in Alfonso Cuarón’s feature film, Gravity.

In addition to directing, Taylor will produce via his Wyolah Films company alongside Mandeville Films’ David Hoberman and Todd Lieberman (whose past projects include The Fighter and The Muppets) and Tom Shelly. Taylor also wrote the script for the project, based on the nonfiction book, Tupperware Unsealed, written by Bob Keating.

“Sandy and I have been trying to work together for years,” Taylor said of the project, per Indiewire’s Women and Hollywood blog. “I’m very excited to put Tupperware in her hands. This is a collaborative dream come true.”

Though Earl Tupper was the one to initially develop Tupperware, sales of the plastic container only really took off in the 1950s thanks to Wise, a pioneering sales exec and the mastermind behind the creation of the Tupperware party. Her idea not only launched a career running the Tupperware firm’s sale division, but also earned her newfound fame, turning her into a celebrity spokesperson in her own right.

Her popularity earned her a cover on Businessweek, making her the first ever female to appear on the front of the publication. But her fame didn’t last long. As women continued to be inspired by Wise’s advocacy of married women earning their own salary, her already tumultuous relationship with company president Earl Tupper became more and more strained.

Eventually, their differences became irreconcilable and Tupper fired her in 1985, leaving her with no stock and only one year’s salary of around $35,000. Her extensive contributions to Tupperware were removed from the company’s records. She attempted to launch her own cosmetics company, Cinderella, but it failed to get off the ground and she passed away in relative obscurity in 1992. Meanwhile, Tupperware sold his company to Dart Industries for $16 million.

If anyone can bring a role like that to life, it’s Bullock, who won an Oscar for bringing another true story to the big screen with her performance as Leigh Anne Tuohy in The Blind Side. The actress has been choosy following her award-winning performance in Gravity, so this script has to be up to par for her to have decided to participate. Having Taylor on board probably played a strong factor into the decision as well. In addition to being friends with Bullock, the director has experience working with biopics, having previously worked on the Oscar-nominated Civil War era film The Help and most recently, co-writing, directing and producing the James Brown movie, Get On Up, hitting theaters August 1.

Interestingly though, this movie isn’t the only female entrepreneur-focused film in the works. As Indiewire points out, David O. Russell is once again collaborating with Jennifer Lawrence for Joy, the biopic about Miracle Mop inventor and HSN star, Joy Mangano, slated for Christmas 2015.

Bullock’s list of future projects includes potentially reprising her role as the uptight agent Sarah Ashburn alongside Melissa McCarthy in The Heat 2, although those reports remain unconfirmed. She’s also voicing Scarlett Overkill in the animated kids flick Minions, the spin-off to the Despicable Me franchise.