Sarah Silverman May Be Making a TV Comeback 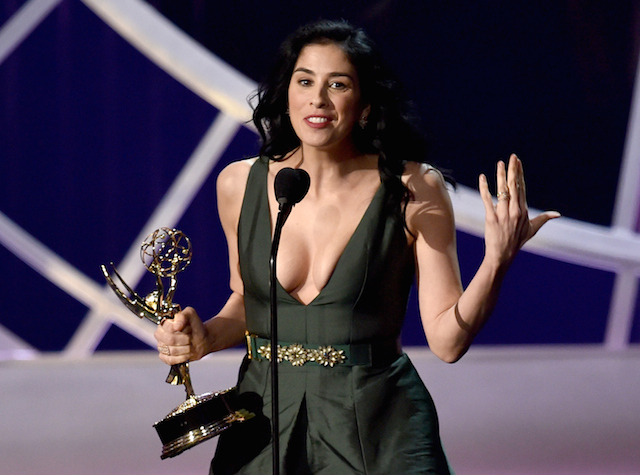 Sarah Silverman is officially planning a return to the small screen. The comedienne is set to star in an upcoming comedy series that was recently picked up by HBO.

According to The Hollywood Reporter, the premium cable network has issued a pilot order for the still-untitled show. Plot details are scarce, but the series will reportedly be a “comedic look at a pathologically honest woman” (Silverman) in the midst of a “modern midlife crisis.” In addition to starring, Silverman will serve as executive producer alongside Ash Atalla (Trollied, Cuckoo), her manager Amy Zvi, and Dan Hine (Cuckoo). Secret Diary of a Call Girl‘s Lucy Prebble will pen the script, as well as executive produce.

Should the show make it to air, it would mark Silverman’s first regular television series role since Comedy Central’s The Sarah Silverman Program, which followed the day-to-day adventures of fictionalized versions of Silverman, her sister Laura, and their friend. The show ran for three seasons before ending in 2010. Since the conclusion of the series, she’s gone on to several other notable TV projects. She starred in a 2011 NBC pilot that never made it to screen but eventually leaked online. She’s also held recurring roles on Showtime’s Masters of Sex and Fox’s animated sitcom Bob’s Burgers.

The forthcoming project is only the latest partnership between Silverman and HBO. The comedienne and actress has previously teamed with the network for the comedy special Sarah Silverman: We Are Miracles, which was nominated for both Best Variety Special and Outstanding Writing in a Variety Special at the Emmys (the latter of which she won). We Are Miracles also recently earned a Grammy nomination for Best Comedy Album.

The new pilot comes only a year after Silverman almost starred in another potential series for HBO, entitled People in New Jersey. According to THR, that comedy, from SNL’s Lorne Michaels and Girls’ Bruce Eric Kaplan, would have featured Silverman and Topher Grace as an adult brother and sister. HBO green-lit a pilot for People in New Jersey but eventually passed on further developing the show. Now, Silverman will be returning to the network’s fold with this new starring vehicle.

Aside from marking another partnership between Silverman and HBO, the untitled project is also the second comedy pilot that the network currently has in the works. After picking up Togetherness, The Brink, and Ballers to series and bringing Lisa Kudrow’s The Comeback back to life, the channel is also developing an untitled half-hour, newspaper-themed sitcom from Diallo Riddle and Bashir Salahuddin (Late Night with Jimmy Fallon), and executive produced by Lorne Michaels.

Fans will have to stay tuned to see if the new comedy will prove to be the right fit and end up becoming Silverman’s television comeback. In the meantime, she has plenty of other projects in the works on the big screen. The actress, who voiced a character in 2012’s Wreck-It Ralph and co-starred in Seth MacFarlane’s A Million Ways to Die in the West earlier this year, will next be seen in the indie drama I Smile Back, premiering at Sundance in 2015. Per Deadline, she’s also reportedly set to co-star in Still Punching the Clown (a sequel to the 2009 comedy Punching the Clown) that was recently put into development.