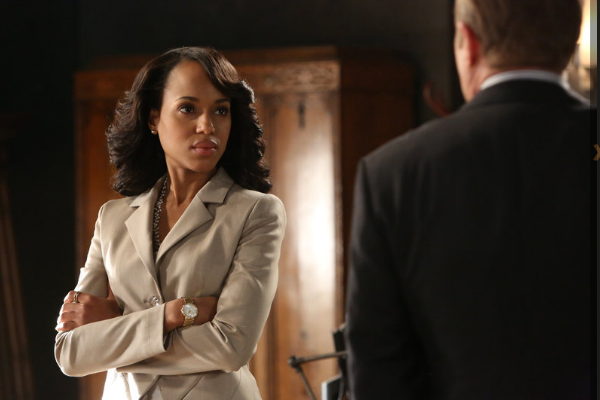 The highly anticipated fourth season of Scandal premieres on September 25, and fans are looking forward to getting some long-awaited answers — specifically to the question: where in the world is Olivia Pope? Ahead of the upcoming season debut, Kerry Washington and the rest of the cast are spilling some more details about what viewers can expect to see and from the sounds of it, one thing’s clear: Liv’s return to the nation’s capital won’t be pretty.

That shouldn’t come as a surprise given the mess she left behind last season. As loyal viewers of the political drama will remember, the last season ended with Pope (Washington) falling back into the arms of Jake (Scott Foley) and the two flying off into the sunset while her longtime Gladiator, Harrison (Columbus Short), is killed at the hands of her own father (Joe Morton). Meanwhile, Fitz (Tony Goldwyn) has been re-elected for another four years as President of the United States after the death of his son.

So where in all that drama does season four pick up? Washington declined to reveal if her character is still with Jake or where exactly she is (the trailer showed her sipping wine on a beach), but it’s clear she won’t be away for too long. An event forces the political fixer back to the states where she’ll have to deal with both the repercussions of running away and the fallout from the gang at Popes & Associates, who aren’t exactly thrilled with her for leaving them at such a tumultuous time.

Speaking of OPA, the state of the office is in a weird state of flux with Olivia gone. The rest of the characters are dealing with the loss of their fellow Gladiator, Harrison, who — contrary to rumors that he could still be alive — actually did pass away, as evidenced by the public exit of Short from the show. “You’re going to see how all the characters deal with Harrison’s death. Shonda wrote such a special episode and it’s a lovely tribute to Columbus [Short] and the character and a nice send-off,” Guillermo Díaz, who plays former B613 assassin Huck on the series, told The Hollywood Reporter.

Abby (Darby Stanchfield) is taking both the loss of her friend and the departure of Olivia particularly hard. “She’s profoundly changed [by Olivia’s absence],” Stanchfield told THR, also admitting she “was unprepared for where Abby starts off.” But as fans know, her character has experience pulling herself out of difficult situations and moving on.

She’s not the only Gladiator dealing with change. Having found his family after years apart, Díaz’s Huck is still struggling to figure out the best way to move their relationship forward. It’ll be an uphill battle as his wife is understandably angry at him for leaving her, even though he did it out of an attempt to keep them safe. At the same time, he’s also dealing with the aftermath of his strange relationship with Quinn (Katie Lowes), whom he told never to speak to him again in last season’s finale. “We’ll see how she’s dealing with Huck basically cutting her out of his life again,” Lowes explained to Entertainment Weekly.

The White House is also in upheaval. Cyrus (Jeff Perry) is left devastated by the death of his husband, James (Dan Bucatinsky). “There’s a real loneliness that he’s dealing with and a real disorientation,” Perry told THR. In order to take his mind off things, he throws himself into working on turning the administration around alongside Fitz, who is dealing with his own personal loss of his son. “Cyrus and Fitz roll up their sleeves, and Fitz proposes a strikingly radical, shocking-to-both-sides-of-the-aisle political agenda,” Perry told EW. That agenda will put them in contention with Portia de Rossi’s new character, whom we know very little of other than she’s a D.C. power player in the Republican party.

Clearly, this season will be jam-packed with plenty more of the satisfying, heart-stopping drama that has made Scandal one of the most watched (and most agonized over) shows on TV. Let the crazy plot twists and subsequent Twitter frenzies begin!