‘Serial’ Cheat Sheet: Your Guide to the True Crime Podcast

Entering into the final episode of its debut season, Serial has become a worldwide phenomenon, quickly garnering the world’s attention as Sarah Koenig delves into the 15-year-old case where Adnan Syed was convicted of murdering his ex-girlfriend, Hae-Min Lee. Adnan claims even now that he was innocent, having spent almost half his life in prison following the curiously one-sided trial that sent him away.

Koenig breaks down evidence long since abandoned, talks with people involved with the case back in 1999, and even speaks at length with Adnan himself to get his side of the story. Each week, she uncovers another mystery surrounded the supposed guilt of Syed, leaving listeners wondering whether or not an innocent man was convicted. Some evidence seems to incontrovertibly prove Adnan’s innocence, while other bits and pieces indicate the murder couldn’t have been carried out by anyone else. Minute by minute you’ll find yourself questioning your own sense of morality and objectivity. Naked Law mirrors this frustration, going so far as to claim that Serial brings into doubt the very fundamentals of our justice system.

Is it enough to leave it up to lawyers to decide which facts and narratives are worth presenting at trial? Do lawyers have the right incentives to get the most important facts to a jury, or are critical facts routinely left out of trials due to problems like and flooded criminal dockets that beleaguer our adversarial system today? Do we need to change the rules governing criminal procedure, and should we experiment with non-adversarial systems?

All this culminates in a true crime drama that has enthralled millions of listeners for weeks on end. Is Adnan guilty? If Adnan didn’t kill Hae, then who did? Why didn’t Adnan’s lawyer (now deceased and unable to answer these questions herself) present key evidence that potentially could have exonerated her client at trial? It’s not clear if we’ll ever get the definitive answers to these questions, but it hasn’t stopped Koenig from trying.

In a few short weeks, Serial has become the most listened to podcast in the world: Reports tend to vary, but from what we can find it averages between 1.25 and 1.5 million downloads per episode (per estimates from the Wall Street Journal and The New York Times respectively). It set an iTunes record for the fastest show to 5 million downloads, and is the most listened-to podcast in the United States, Canada, the U.K., and Australia (it’s in the top 10 in Germany, South Africa, and India). Celebrities have even taken to the web to voice their respective obsessions.

@serial has taken over my life

My favorite TV show is on the radio. Do yourself a favor & listen/download @serial. It makes me wish i had a longer commute & I live in LA. — Danny Züker (@DannyZuker) November 6, 2014

One New York Times article cites a conversation they had with iconic NPR voice Ira Glass, where he notes that it took nearly four years for the wildly popular This American Life to reach a million listeners. Serial cracked that milestone in just one month. Simply put, the whole world is listening and for good reason. With a backlog of 12 episodes currently available for download and the finale having just aired, it’s easy to find yourself lost in the complex maze of evidence and testimony that Koenig unravels to perfection.

Where can you learn more?

Since Serial first aired, the Internet has exploded with theories based on both Koenig’s discoveries and independent investigations by amateur sleuths. The Reddit community devoted to the show currently has over 26,000 members, with many positing their own theories concerning Adnan’s trial and supposed guilt. It’s a bit of a black hole and can be difficult to sift through given the sheer volume of posts, but it’s become something of a proving ground for fans of the show to voice their own suspicions and speculation.

Reddit, of course, isn’t the only place where compelling discussion has taken place these last few months. Slate hosts a weekly podcast that talks over each episode of Serial in detail, breaks down new discoveries, and voices their own opinions. They also have a massive archive of articles they’ve written covering the show, detailing just about every facet you could possibly imagine. For those of you who prefer a shorter, more concise breakdown of the season to date, Time has a neat summary that you can check out over in this direction.

Serial has even broken so far into mainstream popularity that Koenig netted a spot on The Colbert Report, where she chats about what the show has become and how it’s completely and utterly exceeded her wildest expectations.

Information on things like the case timeline, who was where at what time, and more can be found on Serial‘s official site (although we’d highly recommend listening to the episode each respective infographic and piece of evidence coincides with first). For you visual learners, Propoint also has a handy infographic that maps out the witness testimony and cell phone records.

What’s the impact of Serial? 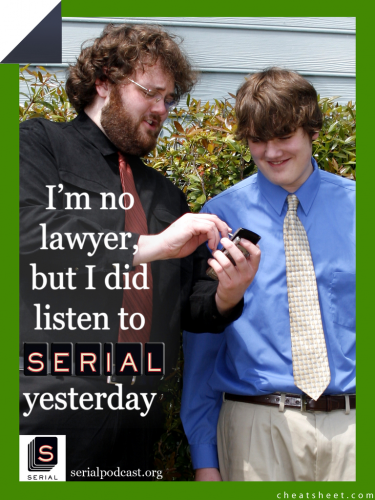 Serial has created ripples that have extended far into the outer reaches of the world. In CNN’s by-the-numbers rundown, they note the 39 million people who’ve listened to the podcast in the last month, the 7% of listeners who think Adnan is guilty, the 20% of respondents to a Buzzfeed poll who admit they’re unsure of their verdict, and the $25,000 Reddit is trying to raise for a scholarship fund in Hae-Min Lee’s name (as of publishing they’re currently at $1912). These numbers alone give us an idea of the immediate effect this show has had on its listeners.

We even see positive change enacted on a more personal level. In an interview with The Baltimore Sun, the Syed family admits that Serial has “kind of brought us back to life.” Adnan’s older brother goes on to reflect his family’s sentiments concerning the outpouring of support brought on by the podcast:

For 15 years we were in silence, and now the whole world can hear our voice. It makes us feel like we’re not alone. We’re not crazy. We’re not the only ones who think (Adnan is) innocent.

Since it began airing, the Syed’s estranged eldest son Tanveer has even entered back into the fold, visiting weekly, and making plans to move to Hagerstown to be closer to his family. Of course, Serial hasn’t been without its share of criticism, most prominently from Hae’s brother Young. He took to Reddit a month ago, putting a face to the other side of the story:

I won’t be answering any questions because… TO ME ITS REAL LIFE. To you listeners, its another murder mystery, crime drama, another episode of CSI. You weren’t there to see your mom crying every night, having a heartattck[sic] when she got the news that the body was found, and going to court almost everyday for a year seeing your mom weeping, crying and fainting. You don’t know what we went through.

According to Young, his mother isn’t even aware of the podcast, with him finding out about it only after getting a call from his cousin. He does go on to compliment Koenig as “an awesome narrator/ writer/ investigator,” but what his input lends us is a human face to a story that isn’t truly real to us as listeners. Legions of Reddit users have launched their own investigations in search of Internet justice, although the comments following Young’s appearance were largely supportive and sympathetic, offering a stark contrast to the emotionally removed demeanor of your average amateur sleuth.

Why should you tune in?

Serial’s value goes far beyond its entertainment factor. In its brief 12-episode run, it’s turned the way we see the American justice system on its head. Regardless of whether you think Adnan is guilty, it paints a clear picture of a system that sent a teenager to prison without considering key evidence and testimony that could very well have sent the case in a completely different direction. In an interview with The Guardian, Syed’s family even goes so far as to say that Koenig is “doing a better job investigating than the police did.”

It’s a show that leaves us questioning the very fundamentals behind litigating morality, and every week has left listeners rethinking their own definitions of the word “guilty.” Koenig and her team have single-handedly revolutionized the viability of podcasts as a medium for social change, and in doing so created a wildly compelling story that we’ll be telling for years to come. You can listen for yourself, with every episode (including the Season 1 finale) hosted below from the podcast’s official Soundcloud. We would also highly recommend checking out the visual aids and summaries provided on Serial‘s site as you tune in.