Shark Week 2018: Full Schedule and How to Watch Online

The 30th annual Shark Week has arrived on Discovery Channel. The marathon began on Sunday night, and throughout the next six days, fans will be seeing nearly 20 hours of new programming featuring special guests like Rob Gronkowski and Guy Fieri. So what’s the full Shark Week schedule this year? And if you don’t have cable, how can you watch it?

Let’s dive into the schedule first. You can see the entire thing on Discovery’s website, but since a lot of it includes reruns, we’ll just be highlighting all of the new content here (all times are eastern):

4:00 p.m. – Shark Week’s Isle of Jaws: “What happened to the sharks from the Neptune Islands off of South Australia? Photographer Andy Casagrande and marine biologist Dr. Jonathan Werry investigate the disappearance and uncover an astonishing scientific phenomenon in the process.”

8:00 p.m. – Monster Tag: “In this thrilling and urgent Shark Week special, Aaron Rogers, Lindsey Vonn, and Robert Gronkowski join forces with shark scientists to learn crucial information about shark populations and how to save our ocean’s top predators.”

10:00 p.m. – Cuba’s Secret Shark Lair: “In 1945, one of the largest sharks ever recorded was captured in Cuban waters, a great white named ‘El Monstruo.’ Two teams of researchers divide and conquer in search of Cuba’s massive great hammerhead in ‘The Queen’ and ‘El Monstruo’-sized great white.”

4:00 p.m.   Shark Week’s Monster Mako: “Marine biologists set out to clock the top speed of the fastest shark in the ocean, the mako.”

7:00 p.m. – Cuba’s Secret Shark Lair: Sharkopedia Edition: “With Sharkopedia facts and trivia – In 1945, one of the largest sharks ever recorded, a great white named “El Monstruo,” was captured near Cuba. In 2018, scientists search Cuban waters for another monster great white and “The Queen,” a massive hammerhead.”

8:00 p.m. – Guy Fieri’s Feeding Frenzy: “Shark Week teams up with Guy Fieri and his son, Hunter in the Bahamas to experience local cuisine and explore and understand what makes the waters around these islands the ideal all-you-can-eat buffet for such a wide variety of shark species.”

9:00 p.m. – Laws of Jaws: “Shark attacks are on the rise! Is it the shark’s behavior or our own? To test this theory expert divers Liz Parkinson, Mike Dornellas and Nick LeBeouf team up with Andy Casagrande to recreate real-life scenarios for answers and teach us the LAWS OF JAWS.”

10:00 p.m. – Air Jaws: The Hunted: “In 2017, five great whites washed up dead on the beaches in South Africa. Shark Expert Alison Towner believes they were eaten alive. She teams up with Chris Fallows and Andy Casagrande to find out who killed them and how to save the species in the future.”

7:00 p.m. – Air Jaws: The Hunter: Sharkopedia Edition: “With Sharkopedia facts and trivia – In 2017, five great whites washed up dead on beaches in South Africa. Shark experts believe they were eaten alive. A team of researchers set out to uncover who killed them and how to save the species in the future.”

8:00 p.m. – Air Jaws: Back from the Dead:  “In 2001, Jeff Kurr joined Chris Fallows off the shores of South Africa to witness great whites launching out of the ocean as they attack seals. 17 years and 7 shows later, Jeff and Chris travel to New Zealand in search of the next Air Jaws hotspot.”

10:00 p.m. – SharkCam Stakeout: “Researchers go to the Bahamas to investigate the private lives of bull and hammerhead sharks.”

4:00 p.m. – Shark Week’s Alien Sharks: “The strangest sharks, including the sawshark, the goblin shark and a shark that glows in the dark.”

8:00 p.m. – Sharkcam Strikes Back: “SharkCam Strikes Back celebrates the remarkable discoveries the team have made in the last six years and take a tongue in cheek look at some of the disasters. From napping great whites to SharkCam attacks, its highlights all the way.”

9:00 p.m. – Sharkwrecked: “It’s the most dangerous Shark Week stunt, Paul de Gelder and James Glancy spend 48 hours shipwrecked. With no food, or water, the physical condition worsens, and the risk of shark attack rises. How will the sharks behave? And will the men get attacked?”

6:00 p.m. – Shaq Does Shark Week: Sharkopedia Edition: “With Sharkopedia facts and trivia – Shaquille O’Neal accidentally signs himself up for the 30th Anniversary of Shark Week, but Shaq doesn’t do sharks. To overcome his fear, he trains with U.S. Marine Corps veteran and comedian, Rob Riggle.”

8:00 p.m. – Megalodon: Fact vs. Fiction: “What if the largest shark that ever existed were still alive today? With help from experts, they will re-examine the original Shark Week, Megalodon: Still Lives, to paint an accurate picture of how Megalodon would live and hunt today.”

9:00 p.m. – Bloodline: The Spawn of Jaws: “A biologist goes looking for the monsters of Montauk to see if the “Jaws” bloodline continues.”

10:00 p.m. – Great White Shark Babies: “Dr. Mauricio Hoyos teams up with Michelle Jewell and Toby Daly-Engel in search of where the pregnant females of Guadalupe have their pups. Mauricio believes the go to the coast of Baja but what they find while they’re there is a Shark Week first.”

9:00 p.m. – Return of the Megashark: “Shark Week’s most exciting missions are searching for the largest great whites called Megasharks. Jeff Kurr and Andy Casagrande now want to search for the ‘Megasharks’ of New Zealand, all while revisiting the most exciting discoveries from the past years.”

10:00 p.m. – Sharks Gone Wild: “Discover everything that has happened in the world of sharks this year the unbelievable viral videos, the biggest news stories, and the latest cutting-edge shark science.” 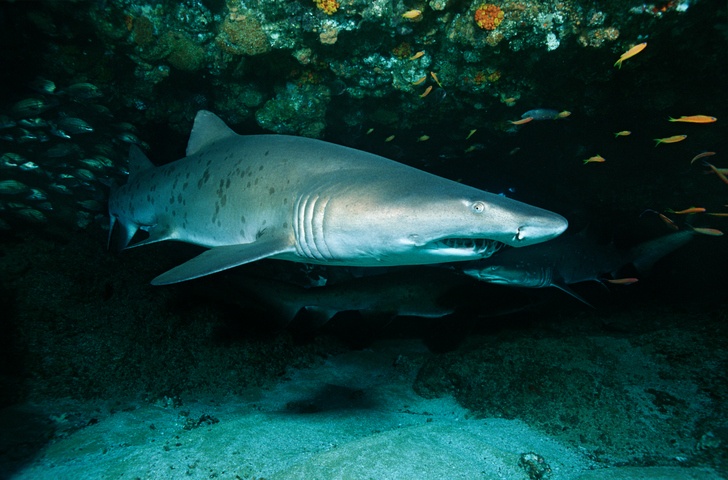 So now that we’ve gone through this year’s schedule, how can you watch it without cable? Unfortunately, Discovery Channel is not available on Sling or YouTube TV, but there’s another option: Philo.

This is a streaming service aimed at cord-cutters that competes with Sling and YouTube TV, and unlike those other services, it offers Discovery Channel. Luckily, it also offers a seven-day free trial, so you can just sign up for that and use it through the end of Shark Week. For the first two days, you only need to enter your mobile phone number. After that, you’ll be asked for a credit or debit card, but as long as you cancel before the end of the seven days, you won’t be charged. The Philo app is available on Roku, Apple TV, and Fire TV.

You can also watch Shark Week on PlayStation Vue or DIRECTV. And if you happen to have a cable subscription or know someone who does, you can stream on the Discovery website.