Smallville alum, Allison Mack, was once a rising young actress. Known for her role as Chloe Sullivan on the long-running WB teen drama, Mack became known for her professionalism and for willingness to help anyone who needed it. Now, the former starlet is facing 15 years to life in prison for sex trafficking and forced labor.

In the mid-2000s, Mack became absorbed with Nxivm Corp. Though it’s touted as “a community guided by humanitarian principles” which was run by self-proclaimed self-help guru Keith Raniere, Nxivm was actually a front for a cult, which preyed upon young women and groomed them to be Raniere’s sex slaves. Sometime around 2005, Mack became enamored with Raniere and quickly rose through the ranks from one of Raniere’s slaves to his top recruiter. Mack’s recruitment tactics were horrifying.

To reel in unsuspecting young women, Raniere and Mack began with the Executive Success Program (ESP); which is how Mack likely discovered Nxivm Corp. ESP had its base out of Vancouver, Canada, where many TV shows, including Smallville, were and are still filmed.

Held in hotel ballrooms and conferences spaces, Variety describes ESP as “a pricey series of lectures and classes designed to help participants set and achieve goals, overcome past traumas, and gain confidence and stature in their professional lives.”

These lectures could cost about $3,500 which included everything from 16-day intensive sessions to one-off classes. This meant that Mack and Raniere were targeting women with money. An insider told  Variety, “These were legitimate courses. It’s not like you showed up and there were handcuffs there for a sex cult.”

Mack became first known for her role in the hit teen show Smallville. | The CW

ESP was just the first level of recruitment. As participants continued to take part in lectures, they were being identified for the women-only Nxivm circle called The Vow. An insider explained to Variety, “The ESP program pushed participants to divulge their fears and vulnerabilities in the context of overcoming obstacles to success.”

Mack’s trigger point as a young actress was probably to make others happy. She was perfect for Raniere’s plan. To join The Vow, women had to turn over “collateral” — aka humiliating photos or embarrassing testimonials that would be used against them if they tried to leave, discredit the organization, or if they didn’t perform their “slave duties.”

Next: A horrendous life

Raniere drew women into his cult. | Hzahaley via Twitter

The actual slave duties for the women in Nxivm’s The Vow are horrendous. Women followed a strict 600 to 800-calorie diet since Raniere liked extremely thin women. He also forced them to stop shaving or waxing their pubic hair. Many of them became so thin that they stopped menstruating.

The women also became extremely sleep deprived since they had to remain alert for their “masters” at all times. Outside of sex, many were branded with Raniere’s initials, forced to pose for nude photographs, and some even performed tasks like, editing Raniere’s articles and transcribing.

Next: One of the most horrific rituals 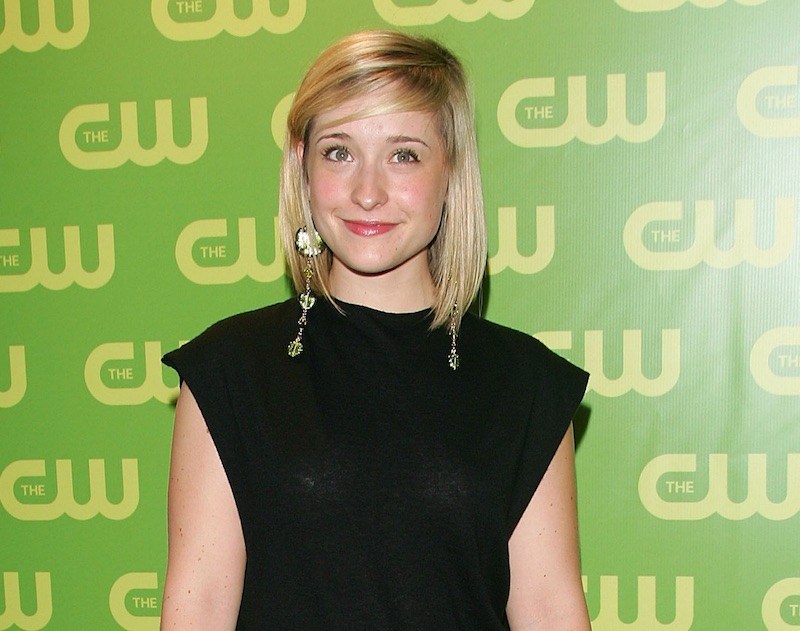 Disturbing details of the cult have been released. | Evan Agostini/Getty Images

One of the most horrific things that Mack and Raniere were alleged to be involved with was branding women near their pubic areas.  As they were being burned, Mack would place her hands on the women’s chests and tell them to “feel the pain” and to “think of [their] master.”

The New York Times reported, “Each woman was told to undress and lie on a massage table, while three others restrained her legs and shoulders. According to one of them, their master, a top NXIVM official named Lauren Salzman, instructed them to say, “Master, please brand me, it would be an honor.’”

In fact, Rainere even acknowledged the act in a statement with The New York Times, he said, “Not initially intended as my initials but they rearranged it slightly for tribute.” Also when inverted, KR spells the initials AM.

While acting, mack rose up the ranks of the cult and began recruiting other women. | Bryan Bedder/Getty Images

As Raniere’s right-hand woman, Mack was in the mix of things. The Department of Justice knows that at one time she was one of Raniere’s sex slaves, but she quickly graduated to the role of Master. Their reports suggest,

During the ceremonies in which her slaves were branded, the defendant placed her hands on the slaves’ chests and told them to “feel the pain” and to “think of [their] master,” as the slaves cried with pain. The defendant also “provided naked photographs of her slaves to Raniere and was aware of Raniere’s proclivity for having sex with multiple young women.

Next: Acting her way into young women’s lives.

So how did Mack lure in so many women into The Vow? Her celebrity helped, but she also had other tactics, and one of them was love bombing.  On Megyn Kelly Today, actress Samia Shoaib told Megyn Kelly, “It was basically a process of mirroring me. We got close very quickly, and looking back, it was a very contrived effort, but at the time she seemed so sincere. I was in a fairly vulnerable time. I had a traumatic experience, and I was drinking too much, and I was looking for help with that.”

Shoaib confided in Mack that Alcoholics Anonomys had too much male energy which led to a dinner were Mac brought along a friend. Shoaib recalled, “I barely remember this woman because she was very quiet. She seemed to be in awe of Allison, and somewhat under her control.”

Investigators now believe that friend was India Oxenberg, Mack’s personal sex slave. Oxenberg’s mother went public with allegations that Oxenberg was under the control of Raniere and Mack.

Next: Desperate attempts to court celebs and well-known women writers.

It seems Mack tried to recruit celebrities like Emma Watson into the cult. | Timothy A. Clary/AFP/Getty Images

Mack had very specific targets in mind when she recruited for The Vow. She reached out to celebrities and women writers, known for their feminist work. In 2016 she reached out to Harry Potter actress, Emma Watson on Twitter saying she was involved with, “a unique human development & women’s movement.” Watson never responded.

She used the same tactic in 2013 with singer Kelly Clarkson.

Next: Mack almost made other attempts to recruit more women. 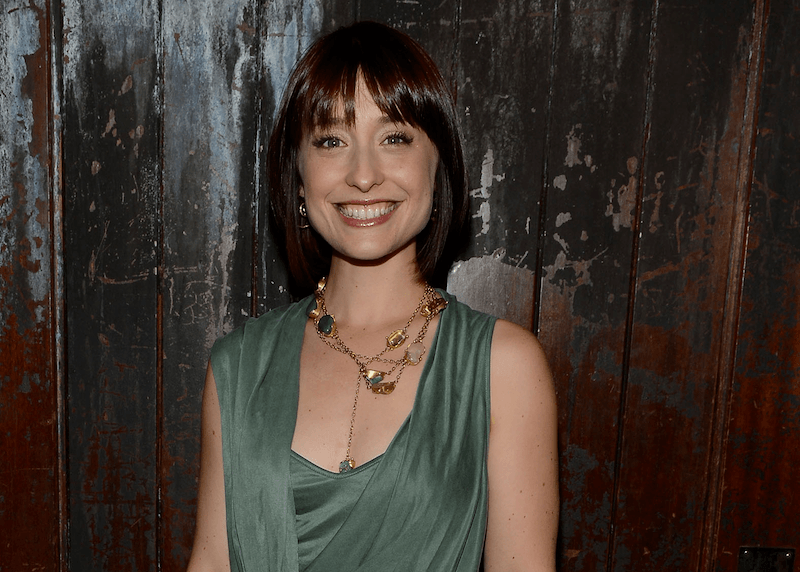 She also attempted to reach out to female writers. | | Mark Davis/Getty Images

She also reached out to female writers via email and Twitter. Though most of the women initially responded, many became alarmed after learning a man ran the alleged women’s group. Others felt put off by the fact that Mack lived in upstate New York instead of NYC. Some just ignored her outright.

Next: Mack almost got another co-star involved years ago.

Mack and Kristin Kreuk reportedly first found the cult together 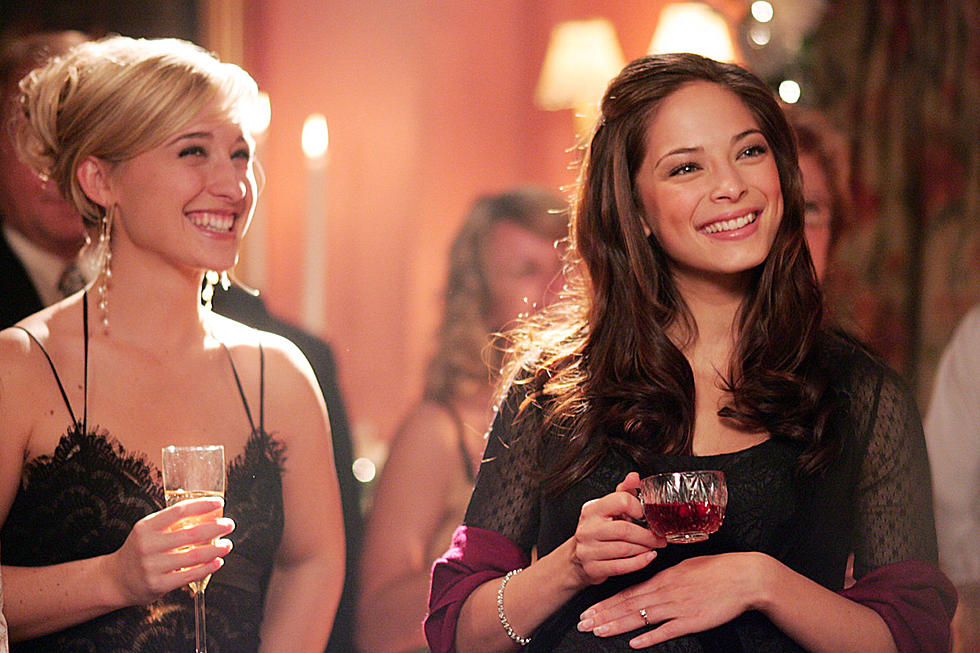 The two co-stars reportedly attended a seminar, but only Allison Mack stayed with the group.  | The WB

Mack and her Smallville co-star Kristin Kreuk signed up for a seminar run by Raniere in the early 2000s. Though Kreuk didn’t stay involved in the group, Mack was enraptured by the older man. Raniere has always known the power of celebrity, so it looks like Mack was his perfect target.

Next: Proof of Mack’s devotion 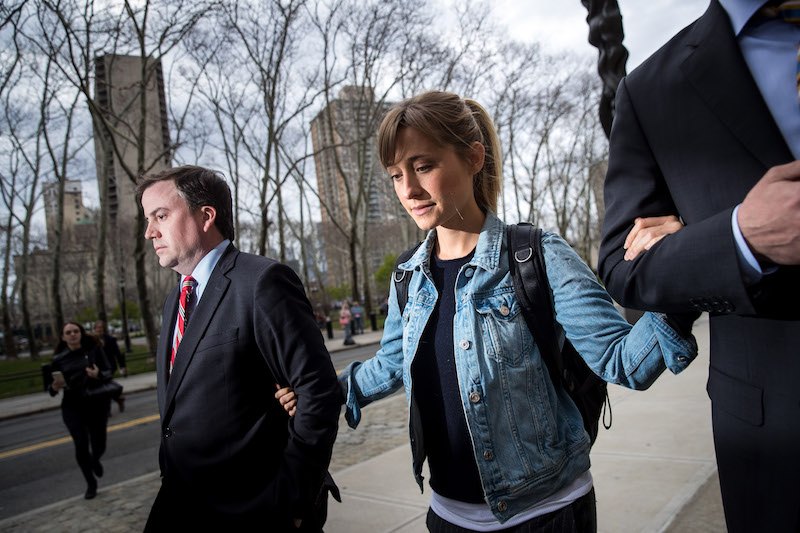 She is devoted to the cult leader. | Drew Angerer/Getty Images

Mack has been devoted to Raniere since first joining the group over a decade ago. On her website, Mack speaks glowingly of Raniere saying,

Next: Here’s how Raniere defends the group.

The cult Allison Mack was involved in presented itself as a self-help organization. | The WB

Pronounced “Nexium,” Raniere still presents the group as a self-help program, even though it was clearly anything but. In response to a shocking article written by The New York Times that chronicled the alleged horrors of NXIVM, Raniere said that his members were “thriving, healthy, happy and better off.” He also insisted that they “haven’t been coerced.”

Next: Some major jail time.

Only time will tell what will happen next. | Drew Angerer/Getty Images

At present, Raniere is being held without bond while Mack has been released under $5 million bond into her parents’ custody. She is under strict house arrest with no access to a computer or a phone.

Apparently, she and the prosecutors are working together so that she may get a plea deal.