Songs to Enhance Your Workout Playlist 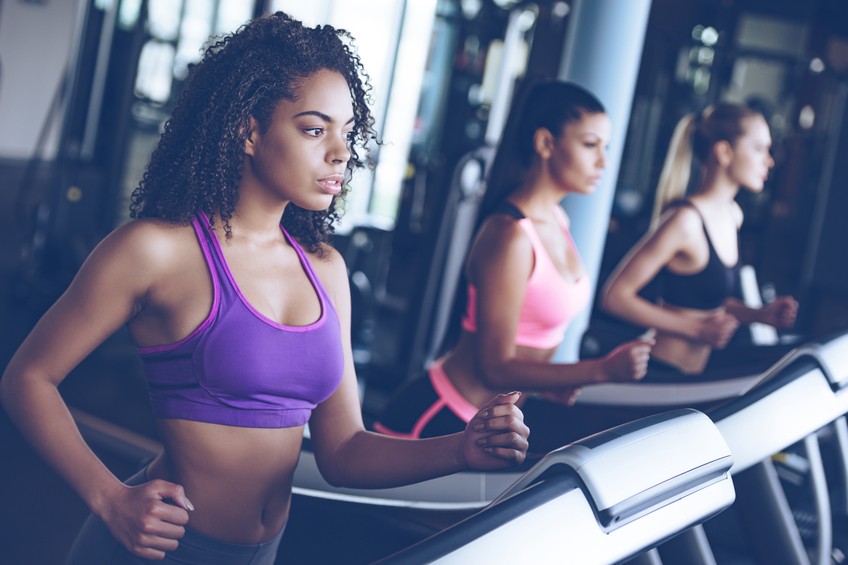 Women looking away while running on treadmill | iStock.com/g-stockstudio

Let’s face it — working out is hard. Most people don’t prefer to spend endless hours in the gym, dripping with sweat, choking on stale air, and making embarrassing grunts around an assortment of your peers. Keeping a consistent workout schedule requires fervent dedication, like keeping your heart rate up or lifting massive free weights is a new religion. Motivation is especially hard to come by for newcomers feeling intimidated by longtime gym-goers who proudly flaunt their washboard abs and bulging muscles.

However, lightweights need not fear, as the simple power of the perfect workout playlist can fill even the laziest among us with ambition. Music can have a powerful influence on our emotions, and our drive to exercise is no exception. It’s important to look for the right qualities when designing a soundtrack to your workout routine. It’s crucial to pick songs that inspire, motivate, and push you to work your body even when you’re craving for the sweet release of couch slobbery.

Here are 25 songs picked precisely to enhance your trip to the gym. Each one embodies that need for enthusiasm and encouragement, whether it’s in the driving beats of old-school hip-hop classics or the raging guitars of hard rock anthems.

Remember that viral angry face Micheal Phelps made before winning one of his many gold medals at Rio? You can thank Future for that. At the 2016 MTV VMAs, Phelps revealed he was listening to the Atlanta rapper’s 2015 track “Stick Talk” at the time, and cited him as a source of optimism and inspiration.

Whether it’s starting every morning with 50 crunches or keeping a consistent schedule for leg day, any dedicated gym rat has to embrace repetition. The appeal of Rihanna’s infectious banger “Work” thrives off of that same idea as she repeats her one-word chorus until the sparse melody becomes a powerful mantra to keep working and celebrate monotony as part of the process.

Dedicated to Michael Jackson, the 2007 electronic anthem “D.A.N.C.E” possesses the same propulsive energy that Jackson perfected throughout his career. That energy also provides excellent workout motivation, as slinking basslines, soaring strings, and a constantly upbeat groove serve to push you through your reps.

Honestly, nearly any Daft Punk song will fit perfectly on a workout soundtrack. The French electronic duo’s trademark repetition and dance floor grooves are made to keep you active and engaged. “Robot Rock” is a prime example of Daft Punk at their peak as arena-ready guitar stabs and disco-inspired drums fill the short track with an incredible energy.

Now that First Lady Michelle Obama has performed her own rendition of “Get Ur Freak On,” Missy Elliott’s signature song might as well be the new national anthem. Elliott’s commanding verses and powerful shouts are amped up by a clatter of percussion that charges every second of the 2001 single with an unstoppable toughness.

6. ‘Search and Destroy’ – Iggy and the Stooges

Released on the aptly-titled 1973 album Raw Power, “Search and Destroy” is the ultimate encapsulation of Iggy Pop’s unfiltered intensity. He opens the track by calling himself “a streetwalking cheetah with a heart full of napalm” over a wash of distorted guitars, which is a perfect image for anyone looking for motivation in the gym. The track is pure, gritty rock and roll energy at its finest.

“Inspector Norse” is the ideal soundtrack for cardio day or a long bike ride through the city. A mixture of bouncy drums and catchy synth lines keep Norwegian producer Todd Terje’s standout single driving along. The track’s easygoing tempo and upbeat melodies are perfect for keeping your heart rate up and your feet moving.

The original Crystal Castles duo of producer Ethan Kath and singer Alice Glass have since split, but “Crimewave” showcases the electronic duo at the apex of its career. Kath uses pounding synthesized percussion to lay down a consistent groove while Glass’ vocals provide a catchy, and slightly eerie, melodic counterpoint. It’s a potent combination for workout playlists as the duo were masters of creating propulsive grooves that will keep you pushing harder at the gym.

“Firestarter” is the classic drum and bass ’90s anthem. At its prime, Prodigy was unmatched in creating fiery electronic beats, charged with lightning-speed drums and powerful synths. “Firestarter” is a crucial jammer for anyone looking for the kind of raw energy and stamina that any effective workout regimen demands.

Well known to any hard rock aficionado, Motörhead’s “Ace of Spades” is the sonic equivalent to riding shotgun in a car on fire, careening over a cliff. Thanks to white-knuckle guitar riffs and deafening drums, the track constantly sounds like it’s about to fall apart into a distorted mess. Gym rats who thrive on hot-blooded energy don’t need to look any further than “Ace of Spades.”

While the track is a pop-feminist anthem, anyone looking for an extra jolt of motivation can benefit from keeping Beyonce’s powerful “Run the World (Girls)” at the top of their workout playlist. Burning snare hits and Afro-Cuban-inspired percussion prop up Beyonce’s impassioned shouts. It’s a fitting gym anthem considering that performing it basically sounds like a workout in and of itself.

The Baltimore-based punk duo Ed Schrader’s Music Beat thrive off of livewire, short-fused blasts of sound. “When I’m in a Car” doesn’t reach a minute and a half in length, but it’s charged with unhinged intensity thanks to Schrader’s spastic wails. Consider keeping this one on repeat for a few times so you can soak in its tireless energy.

Kanye’s infamous ego may draw the ire of some fans, but that overblown self-confidence can augment any workout playlist. “Black Skinhead” is the epitome of Ye’s cocky attitude. As tribal-esque drums pound away in the background, he proudly proclaims “Black Skinhead” his “theme song,” which is exactly what people need when starting their routine.

On “King Kunta,” Compton, California rapper Kendrick Lamar channels the power of James Brown’s funk sections and Dr. Dre’s West Coast grooves. The track features Lamar’s well-deserved braggadocio as he calls out fake rappers who rely on ghostwriters to top the charts. Lamar’s natural self-confidence provides easy inspiration at the gym, especially for those who feel inadequate next to the beefed-up bodybuilders.

16. ‘From Here To Eternity’ – Giorgio Moroder

Disco may be dead, but Giorgio Moroder’s dance floor hits are forever. Tracks like “From Here To Eternity” laid the groundwork for later electronic icons such as Daft Punk and Justice, who take inspiration from his propulsive rhythms and ascending synthesizers. Even if the thought of disco balls and roller skates makes you cringe, Moroder’s ability to keep repetitive grooves interesting makes him an asset in the gym.

Part of the reason why Beastie Boys enjoyed such widespread commercial success is due to its ability to blend hard rock guitars and impressive rap verses without sounding ridiculous. On “Sabotage,” the NYC hip-hop group founds its stride. The opening guitar riff would sound right at home on an Iggy Pop release, but the boom-bap drums and rebellious energy evoke the power of Run-DMC. This crossover appeal makes the track an easy favorite for rock diehards and hip-hop heads alike.

Known as the “Hardest Working Man in Show Business,” James Brown practically invented hip-hop with his skilled horn section and mastery of rhythm. “Cold Sweat” is one of many classic examples of Brown at his best. Blasts of saxophones tightly wrap around funky drums while Brown commands the whole beast with an array of yelps and pleas. His famed work ethic and commitment to perfection serve as a model for anyone striving for excellence in the gym.

While art-rock pioneers Radiohead may be best known for anxiety-inducing atmospheres, “Bodysnatchers” is a rare occasion when Thom Yorke and company find the perfect balance between angsty grooves and infectious melodies. A repetitive guitar riff and driving drum beat anchors the song to the ground while a cacophony of sound builds to a rowdy and forceful climax. It’s powerful enough to keep you engaged while being consistent enough to keep you moving.

The modern female successor to James Brown, singer Janelle Monae combines all the energy of classic funk grooves with contemporary hip-hop vitality. On “Tightrope”, she recruited OutKast alumni Big Boi to spit skillful versus in-between her powerful vocals. Monae is an unstoppable force in R&B, and her music provides a similarly formidable soundtrack for gym-goers.

Even those who balk at the datedness of classic rock heroes have to bow down to the influence and talent of Led Zeppelin. The band’s 1975 hit “Kashmir” marries cascading strings with Jon Bonham’s earth-shaking drumming, making every second of its ambitious eight and a half minute length justified. The chorus is ridiculously anthemic, which is sure to make every stair climb, deadlift, and bicep curl feel like the greatest accomplishment of your life.

It doesn’t matter if you’re an old-head or a rap fan who only follows fresh talent, everyone has to recognize Chuck D and Flava Flav as the quintessential rap duo. Flav plays the perfect hype man to D’s impassioned and unrestrained verses. On “Fight the Power,” both MC’s create the ultimate anthem of rebellion and self-confidence, even if all you’re fighting is the urge to give up and go home.

Canadian-Haitian producer Kaytranada is a newcomer on the electronic scene. His debut, the impressive 99.9%, was only released earlier this year, but it’s packed with radio-ready jams and dance floor grooves. “Lite Spots” is a particular standout due to its fierce, four-on-the-floor rhythms and chopped up samples. Just like the dancing robot in the video, “Lite Spots” is guaranteed to keep you moving when you’re on the verge of defeat.

From the first muted drum hits, it’s obvious that “Gangsta” is an unmitigated banger. Born from the mind of musician Merrill Garbus, tUnE-yArDs is an experiment in dense rhythmic patterns fused with soaring harmonies. On “Gangsta,” Garbus’ swift vocals and fierce shouts command over creeping horns and forceful drums for a brief jolt of energy.

On “Wanna Be Startin’ Somethin,'” Michael Jackson faced the formidable task of opening what would be become arguably the great pop album of all time. He took an ambitious risk with the song, choosing to open the album with a repetitive, six-minute track that rarely deviates from its sparse synth and guitar riffs. However, Jackson’s contagious passion and buoyant spirit keep the single interesting until the end. The nearly unchanging rhythms make “Wanna Be Startin’ Somethin'” a superb addition to your workout playlist, constantly uplifting while keeping the groove chugging along.