‘Star Trek Beyond′: Everything We Know (and Don’t Know)

Like all big franchises these days, Star Trek Beyond is shrouded in as much secrecy as Paramount can manage, but there have still been multiple photos and video leaked (per CinemaBlend) that show extras and stars from the movie on outdoor sets. There have also been studio sanctioned “leaks” from stars like Zoe Saldana and Zachary Quinto, who have shared photos from the set in order to hype up fans for round three. Last December, fans got their first look at some actual footage from the upcoming film, when Paramount released the first official trailer for Star Trek Beyond.

Here’s a look at everything we know about Star Trek Beyond, which is scheduled to be released in theaters on July 22, 2016, just in time to mark the 50th anniversary of the original TV show’s debut in 1966. [Update, 5/23/16: Added second full-length trailer (see below).]

Perhaps the biggest thing we know about Star Trek Beyond is that the plot is going to focus on the five-year mission. Star Trek fans know this as the intrepid space mission Spock, Captain Kirk, and friends head out on in order to explore the final frontier that is space. Captain Kirk described the goal of the mission in the original series through a now famous quote “to explore strange new worlds, to seek out new life and new civilizations, to boldly go where no man has gone before.” Quinto, who plays Spock in the new films, revealed that this would be the plot of Star Trek Beyond to Variety last summer.

“I think the five-year mission will be a part of this next film in some way,” Quinto said while promoting his new Starz docuseries The Chair. “We’re coming up on the 50th anniversary of one of the most iconic sci-fi series in entertainment history so it’s inherently an ongoing story. But I do think that we’ll feel some sense of evolution in these characters that’s been building through the first few films.”

Idris Elba is in it

It has been rumored for awhile that Idris Elba would be playing a villain in this movie, and sources that spoke with Variety back in March suggested that he might play a Klingon. As Star Trek Beyond director Justin Lin recently confirmed to SlashFilm, Elba does indeed play a villain in the new film, but he is not a Klingon. Elba plays a reptilian alien named Krall, (who can be seen above), while Elba’s voice can be heard saying, ” This is where it begins, Captain. This is where the frontier pushes back!”

Zachary Quinto may not play Spock anymore after Star Trek Beyond

Ever since the press leading up to the release of Into Darkness, rumors have been floating around that Quinto is sick of playing Spock, as the actor doesn’t want to become too heavily associated with the iconic role. Before Into Darkness came out, it was rumored that Quinto wouldn’t be returning to play Spock in number three after some comments he made to Entertainment Weekly saying he was ready to “go in a different direction” with his career after playing Spock. Obviously he’s been tempted back to do number three, but it seems uncertain whether he’d come back for a fourth movie (if a fourth one is even planned). 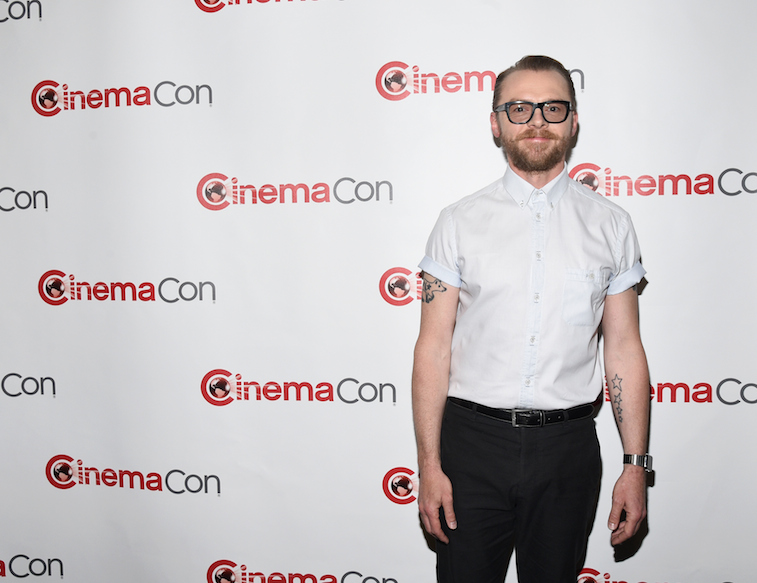 J.J. Abrams directed the first two Star Trek movies in the new series himself, but wanted to pass off the third on to a protege. At first, writer Robert Orci was attached to direct his own script, but when that didn’t work out his script was pushed aside as well. Now writer Simon Pegg, who also plays Scotty, is writing number three. Pegg told Radio Times, via The Guardian, in a controversial interview that Orci’s script wasn’t inclusive enough to non-fans and so Paramount rejected it, which of course angered some Star Trek fans, many of whom have already felt like the latest Star Trek films are just trying to shove Star Trek into the Marvel formula rather than embracing what makes Star Trek special.

“They had a script for Star Trek that wasn’t really working for them. I think the studio was worried that it might have been a little bit too Star Trek-y,” Pegg said. Pegg has credits including Shaun of the Dead and Hot Fuzz to his name, among many movies and TV shows leaning towards the comedic end. It will be interesting to see how his background in comedy, plus the fact that he’s never quite taken on something with this large a scale, affects Star Trek Beyond.

Pegg also had problems with Into Darkness

If you weren’t a fan of Into Darkness, the second Star Trek film directed by J.J. Abrams, then maybe you should have faith in number three rather than writing it off. Into Darkness was famously divisive among Star Trek fans, and that may be part of the reason why Abrams decided to hand off the directing reins (that and duties to Star Wars) to Justin Lin. Pegg said in a recent interview with Den of Geek that he too had issues with Into Darkness and he’s learned a lot from what he perceives to be that movie’s mistakes in drafting the new script.

“We learned a lot. It’s interesting actually, I had certain issues with Into Darkness as well. It’s interesting to be able to take those forward and be at the helm a little bit. You’re always learning when you’re working with a series of movies because you go okay, what did people like there? What did people not like? What did we like?” he told the publication. If you’re a fan that didn’t care for Into Darkness, Pegg’s comments suggest maybe you should give the third film a chance instead of dismissing the new franchise.

[Update, 4/20/16: Added Pegg’s comments from CinemaCon.] Simon Pegg revealed a few more details about the script for Star Trek Beyond at CinemaCon in Las Vegas. According to ComingSoon.net, Pegg and fellow scriptwriter Doug Jung both relied on the Star Trek fan website Memory Alpha for technical details about things such as ships. Pegg also noted that the new film may have a few nods to Search For Spock (the next film in the old series) but won’t have any real plot connections.

One thing fans of the original Star Trek shows haven’t liked about J.J. Abrams’s reinvention is the darker tone of his movies. The originals had an optimistic outlook and Trekkies did not like Abrams’s creative retooling of their beloved world, voting Into Darkness the worst Star Trek film in the canon at a convention in Las Vegas in 2013. While fans hated it, Into Darkness was the most financially successful Star Trek movie, grossing over $467 million worldwide according to Box Office Mojo. We know Pegg is trying to balance the delicate task of listening to fans as well as the studio, and he’s said in a recent interview with Comic Book Resources that he wants to embrace the spirit of the original TV show in the third film.

“I think we just want to take it forward with the spirit of the TV show,” revealed Pegg. “And it’s a story about frontierism and adventure and optimism and fun, and that’s where we want to take it, you know. Where no man has gone before – where no one has gone before, sensibly corrected for a slighter more enlightened generation.”

Star Trek Beyond will include a gay character

One of the many reasons the original Star Trek TV series was so beloved by fans was because it presented a vision of the future in which diversity and multiculturalism were the norm. The movie franchise is continuing  that tradition of embracing diversity  by revealing that one of the major characters is gay in Star Trek Beyond. Appropriately, the character who will be revealed to be gay is Hikaru Sulu (John Cho), the same character that was played by renowned LGBT rights activist George Takei, reports Time.

Star Trek Beyond is scheduled to land in theaters on July 22, 2016.