Within the Star Wars universe, we have concept art for the original movies that dates all the way back to the ’70s. Artists like Ralph McQuarrie have created original artwork that today is considered iconic. Everything from the original designs for Darth Vader, to a stunning vision for the Ewok village on Endor affords us a look at what the franchise could have been in its early days. For The Force Awakens, Industrial Light and Magic brought McQuarrie back, along with a team of other talented artists in tow.

The original art for the latest installment in the Star Wars saga had previously been kept under wraps, but now we can see it in all of its splendor. The concept images show a fair amount of recognizable frames from The Force Awakens, in addition to a host of ideas that never made it out of the development stage. Together, it’s a collection of artwork that’s a veritable gold mine for fans who want to get an idea of just how talented the people behind our favorite characters and intergalactic locales truly are. We can learn a lot about the direction of the franchise based on where the artists saw it going. Here’s what we noticed ourselves.

1. The original designs for Kylo Ren were decidedly more Vader-esque 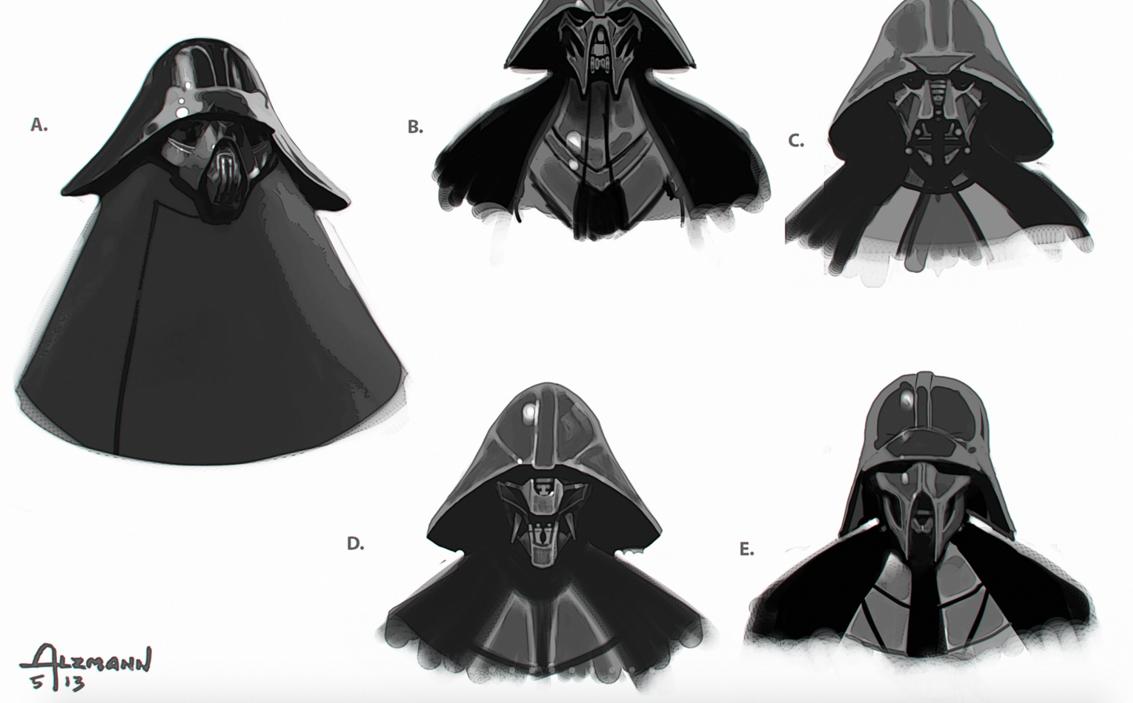 One of the bigger reveals we get in The Force Awakens is the identity of our villain, Kylo Ren, as the estranged son of Han and Leia. Kylo is obsessed with finishing the work of his Sith Lord grandfather, emulating him right down to the black wardrobe and robotic mask. The first round of designs from the IL&M crew played into this heavily, rolling out a series of masks that would have made the link between Ren and Vader immediately obvious the second he first appeared on-screen.

2. A brief look at a Star Wars: Battlefront Shadow Trooper 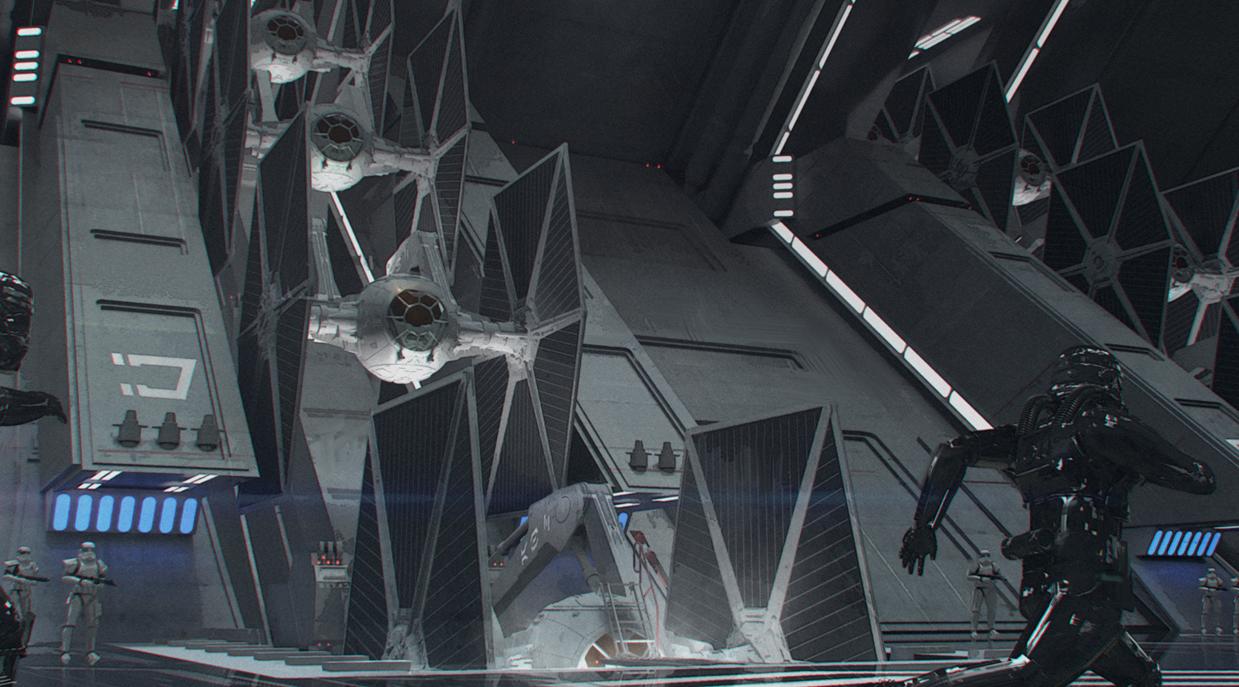 The first thing you’ll likely notice in the above artwork is the row of TIE Fighters akin to the one Finn and Poe used to steal a ship in their daring escape. Sprinting across the frame though, we see black-clad soldiers moving across the hangar. While TIE Pilots canonically wear a similar suit, it’s hard not to see a resemblance to the Shadow Troopers featured in the latest version of the Star Wars: Battlefront video game.

3. A different take on the climactic final lightsaber duel 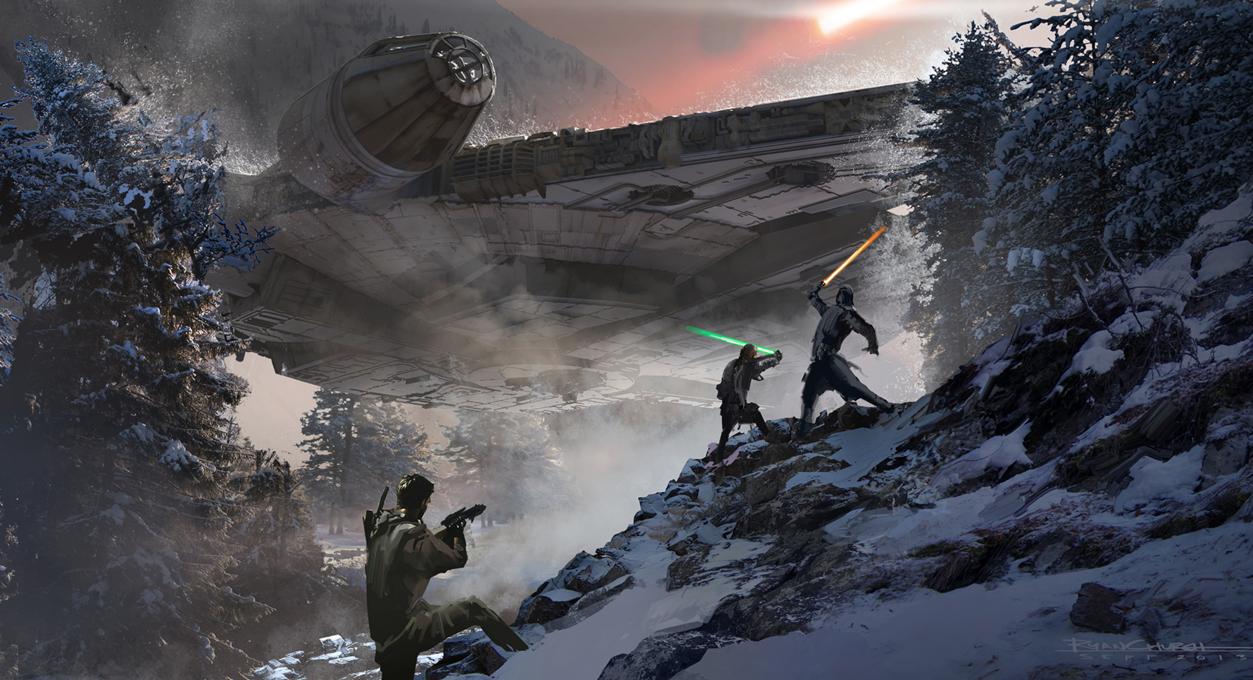 The Force Awakens features plenty of action and adventure, but nowhere was this more prevalent than in the final lightsaber duel between Kylo Ren and Rey, set in the snowy woods of Starkiller Base. The above art, though, shows something of a different version. We see what appears to be an early concept of Poe Dameron holding a blaster aimed toward Kylo Ren and a male figure wielding a green lightsaber. Could the original plan have been for Rey and/or Finn to find Luke Skywalker’s green saber instead of Anakin’s blue one? If the original concept is to be believed, it looks all too likely.

4. Some concepts made it all the way to the final cut

There were a handful of scenes in TFA that gave off a feeling of being artfully composed frames in and of themselves, evidenced by pieces of art like the one we see above. The scene where Han Solo walks out onto the bridge to meet his son is one that’s hard to forget, as the light from the small window above shines directly on the two men. This was clearly something J.J. Abrams made an effort to make a reality, and it’s always interesting to see just where that reality began.

5. Is that the dual-sunset of Tatooine we see?

There are a whole lot of parallels to be drawn between the main story of A New Hope and The Force Awakens: A young orphan living on a desert planet discovers they’re meant for a higher calling, and discovers their true power in a moment of clarity that saves the galaxy. Assuming there aren’t many other desert planets with two suns in the Star Wars universe, it looks like the original intention was to have Rey begin her journey on Tatooine. In the end, it was an idea that was probably a little too on the nose, and moving her to a different desert planet with its own history and personality was definitely the right call. 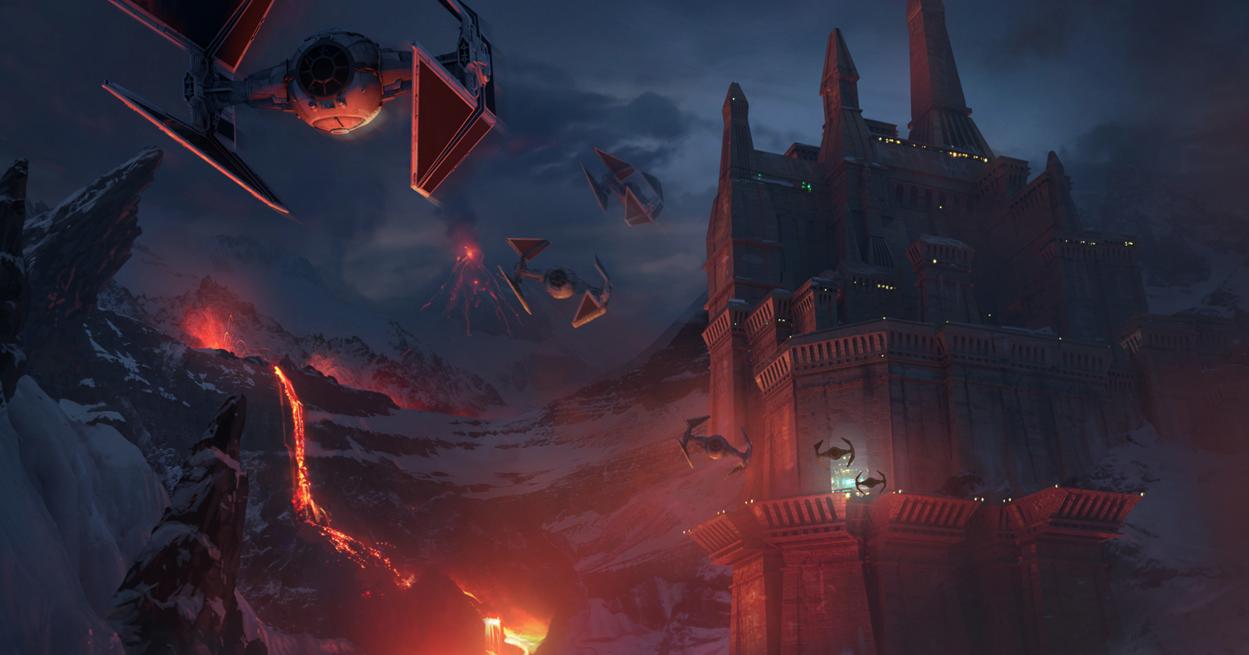 The artwork we see here almost looks like it came out of an entirely different Star Wars movie altogether. Featuring a fleet of TIE Interceptors (a TIE model that didn’t show up in TFA) flying out of a gothic castle, it’s a different kind of vision for the First Order’s base of operations. As it turns out, the castle aesthetic was saved for Maz Kanata, while the First Order got its own highly advanced stronghold, capable of wiping out multiple planets lightyears away.

7. A small peek at what’s to come in Episode VIII

On the surface, this looks like little more than an unused concept that never made it to print in The Force Awakens. Knowing what we do about Episode VIII being filmed on location in Croatia though, we started to see that it was merely saved for the next movie. The streets we see in leaked set photos look strikingly similar to the artwork we see here, in a rare moment of early-stage transparency from the otherwise mysterious Episode VIII. The version we see in the next Star Wars installment obviously won’t include Han Solo like it does above, but there’s no denying the shared aesthetic to the small Croatian town Lucasfilm is currently using.