One of the most popular characters from the Star Wars Legends category is Grand Admiral Thrawn. After the fall of the Emperor in Star Wars: Return of the Jedi, Thrawn took over to lead the remnants of the Empire. Disney has brought Thrawn into the new canon, featuring him in Star Wars Rebels and in various comics and novels. That includes Thrawn: Alliances, the latest novel which is set to release on July 24.

There are only sparse details on this book. We know it takes place during the reign of Emperor Palpatine and features Thrawn working in tandem with Darth Vader. Fans think whatever project the Emperor might have that would require teaming up two of his biggest assets must be big. And now we finally have some details on the plot of the book courtesy of Jedi News, and it could reveal something truly interesting.

“I have sensed a disturbance in the Force.”

Ominous words under any circumstances, but all the more so when uttered by Emperor Palpatine. On Batuu, at the edges of the Unknown Regions, a threat to the Empire is taking root—its existence little more than a glimmer, its consequences as yet unknowable. But it is troubling enough to the Imperial leader to warrant investigation by his most powerful agents: ruthless enforcer Lord Darth Vader and brilliant strategist Grand Admiral Thrawn.

Fierce rivals for the emperor’s favor, and outspoken adversaries on Imperial affairs—including the Death Star project—the formidable pair seem unlikely partners for such a crucial mission. But the Emperor knows it’s not the first time Vader and Thrawn have joined forces. And there’s more behind his royal command than either man suspects.

In what seems like a lifetime ago, General Anakin Skywalker of the Galactic Republic, and Commander Mitth’raw’nuruodo, officer of the Chiss Ascendancy, crossed paths for the first time. One on a desperate personal quest, the other with motives unknown . . . and undisclosed. But facing a gauntlet of dangers on a far-flung world, they forged an uneasy alliance—neither remotely aware of what their futures held in store.

Now, thrust together once more, they find themselves bound again for the planet where they once fought side by side. There they will be doubly challenged—by a test of their allegiance to the Empire . . . and an enemy that threatens even their combined might. 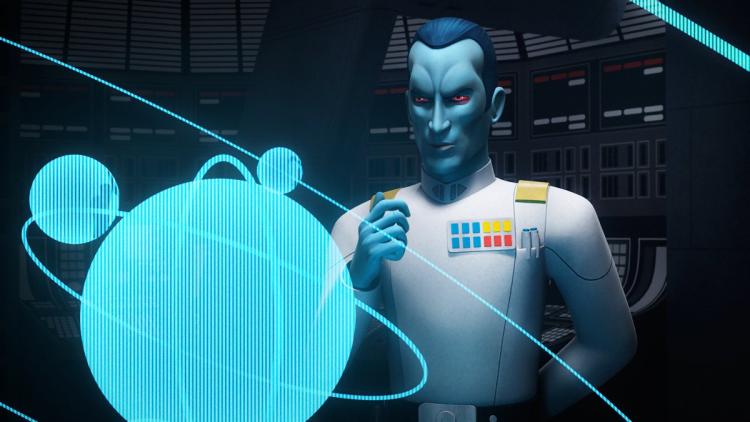 As cool as that would be, there are reasons to think that Thrawn: Alliances might not go that way. As far as we know, Vader had no interaction with Snoke and did not know of his existence. The few words that have been spent explaining the character in novels describe Palpatine of having sensed his potential enemy in the Unknown Regions, but that’s all.

The thing that’s truly interesting? The book refers to Thrawn and Vader traveling to the planet where they once had to form an unusual alliance. But that was when Darth Vader was known as Anakin Skywalker — a fact known to very few in the galaxy. In the first issue of the 2018 comic Thrawn, Palpatine informs him that Skywalker died in the purge of Order 66.

Is it possible that in Thrawn: Alliances, the title character learns Vader’s biggest secret? That would make the Grand Admiral extremely dangerous to the Sith Lord. It would be an interesting layer to a potential alliance.

In Rebels, the last we heard of Thrawn was when he and Ezra Bridger jumped to lightspeed and headed toward unknown space. We know that Ahsoka Tano and Sabine Wren went looking for Ezra following the fall of the Empire. So maybe there is hope that Thrawn could come back once again. Disney spent time focusing on the character’s timeline prior to Star Wars: A New Hope. But it would be pretty neat to see Thrawn emerge as an enemy of the New Republic.