‘Star Wars’ Droids: 12 of the Best (and Worst) Robots in the Saga

Though most of its heroes are human, Star Wars has always been broader than a single species. The entire world of this galaxy far, far away is built around a diverse atmosphere wherein strange, colorful aliens freely mingle with more familiar species.

Perhaps even more important than all of those unnamed aliens are the robots populating the Star Wars universe, creatures that tend to have just as much personality as the people who own and build them. Whether they’re new or old, silent or talkative, the series always treated its droids as their own characters.

So, in keeping with that principle, we’re looking back at the Star Wars saga, prequels and all, to rank the best and worst of the droids, beginning with some of the worst and moving to some of the best Star Wars droids we’ve seen to date. 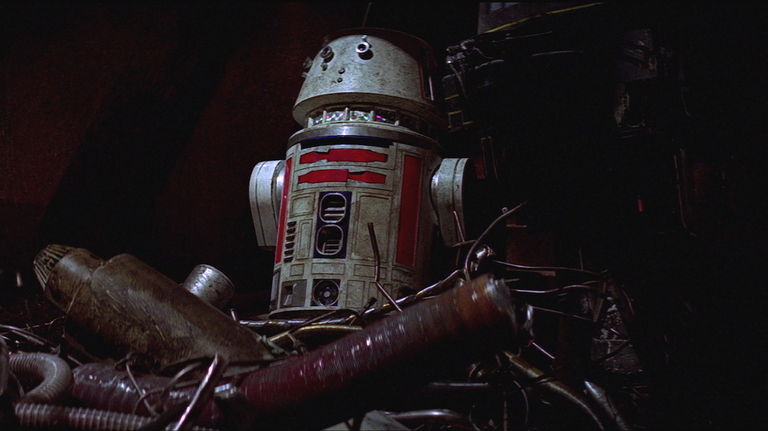 You might not remember R5-D4 very well, despite the crucial role he plays in the entire Star Wars saga. That’s because the droid breaks down almost the second we meet him in Episode IV, when Uncle Owen chooses the red unit over the much better R2-D2. His immediate malfunction shows just how worthless he is, but we can’t officially rank him as the absolute worst, since his simple sacrifice enables the entire original trilogy to happen. 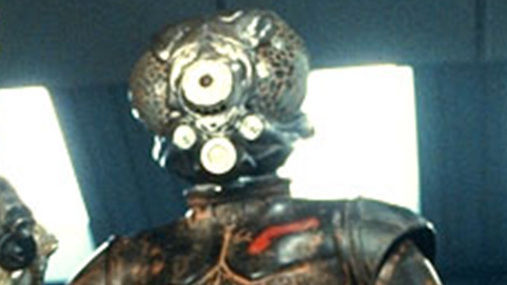 I love 4-LOM, but not because he’s a particularly good character. He has an alright backstory — a protocol droid whose glitches helped him escape his programming and become a bounty hunter — even if he is eventually upstaged by the far more popular Boba Fett.

The reason I both love and hate him, however, is simply because his design looks like a cheap rubber costume from a ’50s sci-fi movie or maybe an automated fortune telling machine. On one hand, his handmade design is part of what makes the original trilogy so lovable, but on the other, 4-LOM just looks too silly for me to take seriously and often takes me out of the film, even for just a moment. 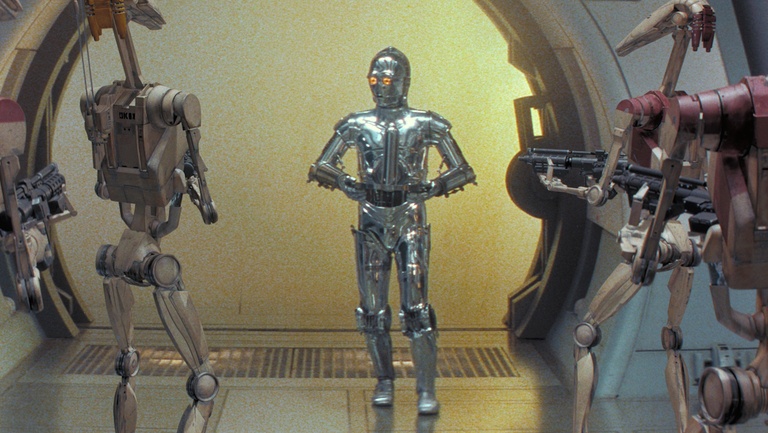 The first entry in the prequel trilogy, The Phantom Menace, almost immediately apes the originals by including TC-14, a horribly lazy creation in a series built on awesome character design. For every second this protocol droid is on-screen you can practically hear a frustrated George Lucas sighing, “I don’t know, maybe we just do C-3PO but silver?” 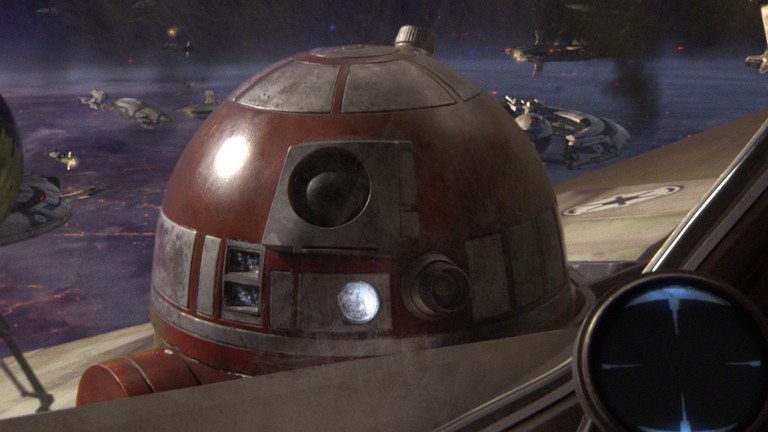 Ditto on what I said above. This robot is clearly just R2-D2 in red, a design that isn’t even worth owning in action figure form. R4-P17 is featured far more than TC-14 throughout the prequel trilogy before he’s mercifully destroyed during the Battle of Coruscant in Episode III. Good riddance, I say. 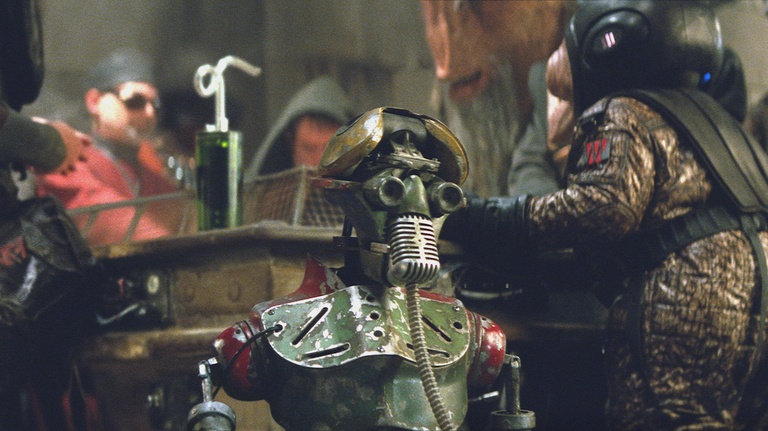 GA-97 is more a symptom of the occasional laziness behind the plotting of The Force Awakens than he is a real character. This well-designed green droid with an old microphone for a mouth appears only briefly during the scene at Maz Kanata’s castle, but in that short time he reveals himself as a member of the Resistance by phoning others about BB-8’s whereabouts.

It just seems overly-convenient for the plot, forcing the characters into meeting up with Leia and other Resistance members when they could easily have just done the same thing on their own.

7. The worst: B1 Battle Droids 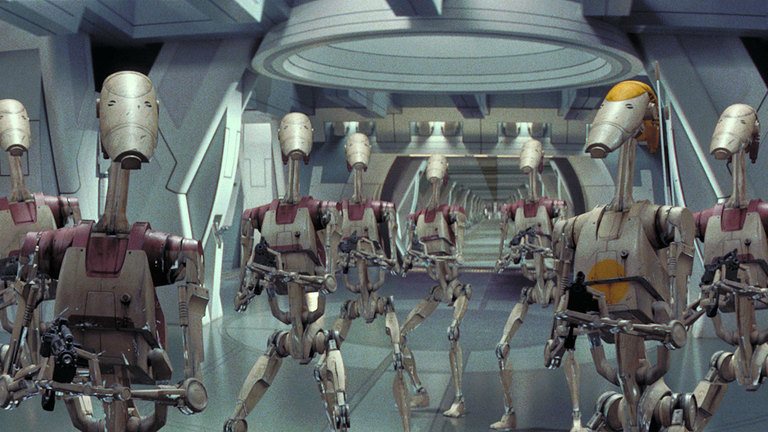 These obnoxious, unpleasant designs overrun the prequel trilogy. Their designs are bland and lifeless, probably because they’re nothing but texture-less CGI creations, and their very existence drains the entire trilogy of tension. These boring, mindless B1s are the primary soldiers fighting the war the entire trilogy revolves around, so why should we care at all about the war? They aren’t even particularly strong, but their strength is in numbers — bad news, since even one was too many. 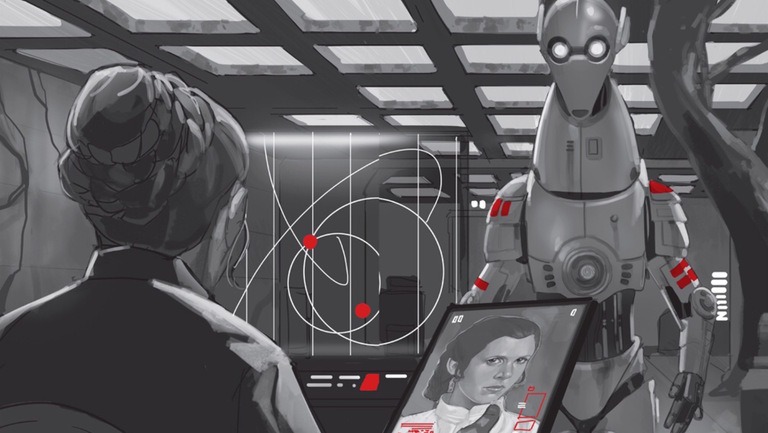 PZ-4CO was briefly featured in The Force Awakens, but this droid’s big time to shine was in her appearance in the junior novel Moving Target: A Princess Leia Adventure released during the long lead-up to Episode VII. Peazy, as she’s nicknamed, has an intimidatingly badass design but a surprisingly calming voice. More important than her design is her loyalty to General Leia Organa, whose memoirs she recorded to help inspire future members of the Resistance.

This adorable droid serves as a testament to the original trilogy’s unique ability to create memorable droid and alien designs for cameos that last all of a few seconds. The mouse droid is seen only in A New Hope, going about whatever business a mouse droid has to attend to and then scurrying away with fright after Chewbacca roars at it, but hardly a week goes by that I don’t wish I had my own mouse droid to scurry around my apartment. Somehow it seems better than the standard Roomba. 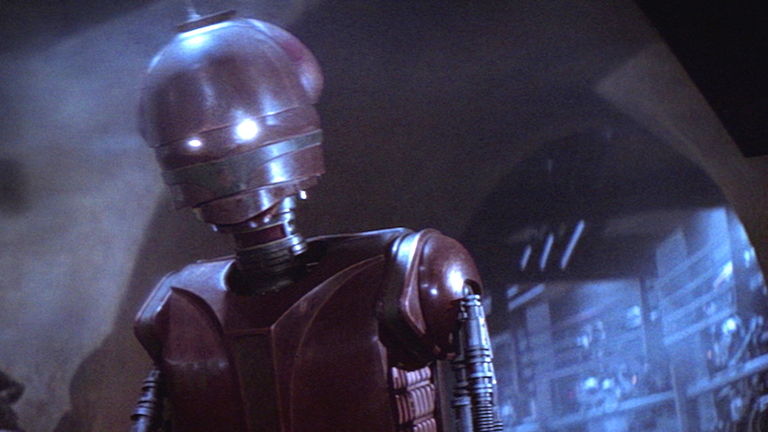 Many of the best parts of Star Wars mythology are simply implied by the films but expounded upon in the extended universe. Such is the case for EV-9D9, a cheap-looking gumball machine of a droid seen in Return of the Jedi as the supervisor of Jabba the Hutt’s droid pool. Why would a thinking droid commit such atrocities against its own kind? Turns out EV-9D9’s programming had a glitch that turned him into an unapologetic sadist who turned his workspace into a clever torture chamber. Droids can be consciously evil too, and that’s a pretty cool idea.

BB-8 in The Force Awakens | Disney

Like so much in The Force Awakens, BB-8 is sort of just a remix of elements from earlier Star Wars entries — like R2-D2, but with a soccer ball for a body! The design may be simple, but it’s unique enough thanks to a new color palette and some lovable character work. BB-8’s big black eyes are strangely cute and the robot managed to score at least a few of Episode VII‘s most crowd-pleasing moments — chief among them his unexpected attempt at giving a thumb’s up. 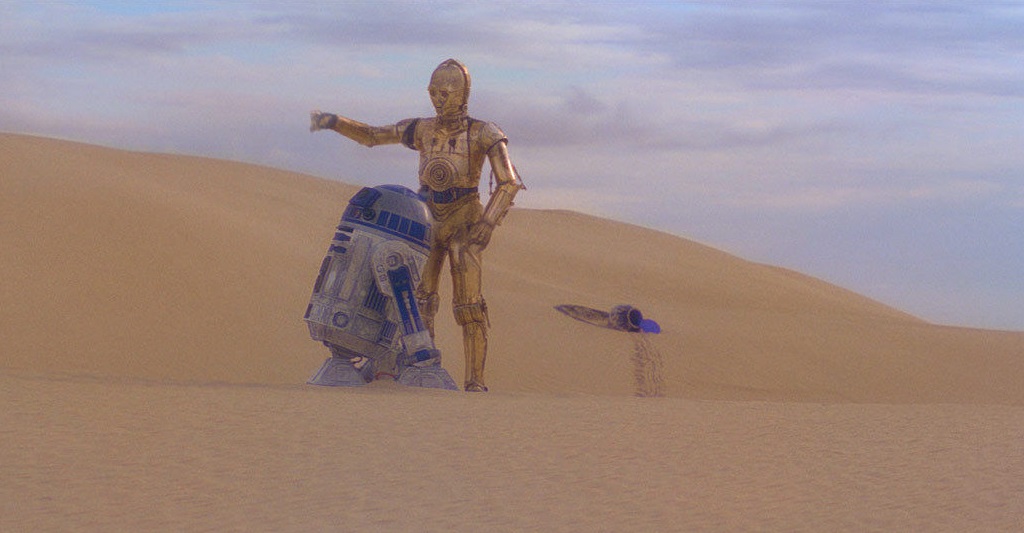 C-3PO is a stuffy butler in the awkward golden body of a protocol droid, a truly off-the-wall creation that makes perfect sense in the ever-strange Star Wars universe. Anthony Daniels’s uptight vocal work along with the droid’s stiff way of moving turned 3PO into a full-fledged character as lovable as he is annoying. The most humanoid of all droids makes us thankful all droids aren’t quite so talkative while providing consistent comic relief with his constant, hilarious fussiness.

R2-D2 is something of a cheat character, a weathered old droid that still has just about every feature you could possibly want to get out of tight situations. He doesn’t speak but he’s brimming with loyal yet snarky personality, most of which comes across in C-3PO’s responses to his beep-booping life partner.

Like so much from the original trilogy, his blue garbage can-esque design is downright iconic and his actions are directly responsible for pretty much everything that happens in the original trilogy. R2 is so great we didn’t even care when he rebooted for no clear reason at the end of The Force Awakens — we were just too happy to see him in working order yet again.