‘Star Wars: The Last Jedi’ Trailer: Is That Kylo and Rey Scene a Misdirect?

The new trailer for Star Wars: The Last Jedi heavily suggests that Rey is tempted to the Dark Side in the film by Kylo Ren. But is the trailer completely faking us out?

At the very end of the trailer released on Oct. 9, Rey states, “I need someone to show me my place in all this.” We then cut to Kylo Ren reaching out his hand, and the trailer ends on this ominous note.

So is it actually going to be a plot point in the movie that Rey is tempted to the Dark Side by Kylo Ren? It’s possible, but a lot of fans believe this to be a red herring. If the main character of the movie was to legitimately turn evil or even flirt with that notion, that would be a huge twist, one that would likely be kept out of the marketing for a franchise that is notoriously secretive.

There are now a few explanations for what might be happening here. The first is that Rey isn’t even talking to Kylo Ren in that scene. You’ll notice that we never get a shot of Rey and Kylo standing together there; we just get individual shots of both of them. So it’s possible that Rey is actually talking to Luke or someone else when she asks for help, and Kylo Ren is reaching out to someone different in a totally unrelated scene. The lighting does kind of look like the shots could be happening at separate locations in different contexts. 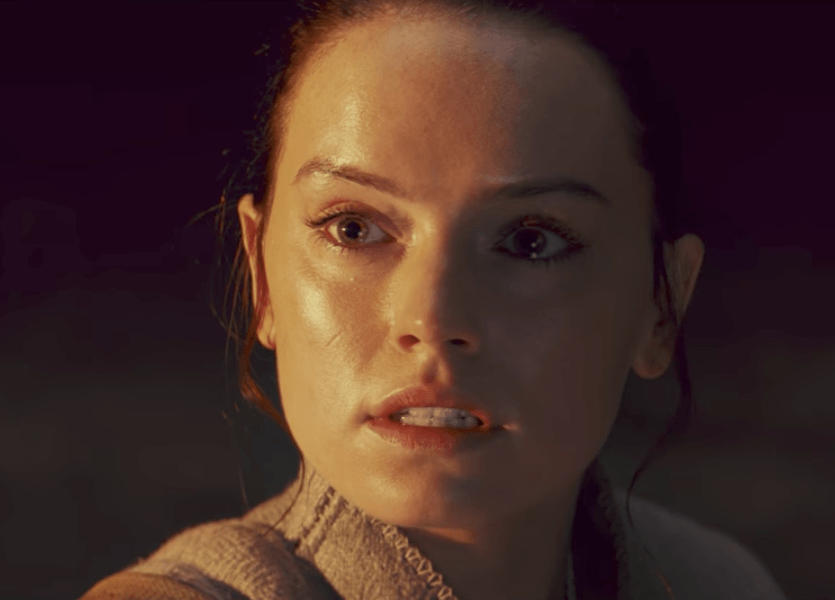 Another theory is that this is a vision, with Rey seeing what her turn to the Dark Side would look like as part of her training with Luke. Perhaps it’s after this that she ends up collapsing out of a cave exhausted, as shown in the beginning of the original The Last Jedi teaser trailer. This would mirror Luke in The Empire Strikes Back having a vision of himself wearing Darth Vader’s helmet during his training with Yoda, and it could be part of the reason Luke is worried about Rey as he clearly is.

A third theory is that the scene does take place the way it appears in the trailer, but what we don’t realize is that Rey is actually going undercover in order to get to Supreme Leader Snoke. We see her in the same room as Snoke at another point in the trailer, someone who seems fairly difficult to get in a room with, so maybe Rey’s plan involves pretending to join forces with Kylo Ren as a way to find and kill Supreme Leader Snoke.

It’s also possible that the trailer is not pulling any tricks and that there really is a scene where Rey is legitimately tempted to the Dark Side by Kylo Ren and perhaps even joins him. But the Star Wars marketing has certainly misdirected fans before. During the lead up to The Force Awakens, for example, the trailers and the posters implied that Finn was going to be the main Jedi in the movie; on the poster, Rey’s holding her staff and Finn is holding the lightsaber. But in the movie itself, it’s Rey who is the main new Jedi, whereas Finn is knocked out almost immediately after picking up the lightsaber and trying to duel with Kylo Ren. A line by Luke in this Last Jedi trailer also might be a meta hint that there are some red herrings afoot, as he says, “This is not going to go the way you think.”

There’s also another moment in the trailer which does seem to be more of a clear misdirect: the scene of Kylo Ren preparing to kill Leia. Mark Hamill and Lucasfilm President Kathleen Kennedy have both gone on record as saying that Carrie Fisher was meant to be a big part of Star Wars: Episode IX and that her role in The Last Jedi was not changed after her death, which suggests that Leia does not die in the new film and that the trailer leading us to believe that is another fake out.

Star Wars: The Last Jedi opens in theaters on Dec. 15.