‘Star Wars: The Last Jedi’: Rian Johnson Says This 1 Character May Become the New Leader of the Resistance

The release of Star Wars: The Last Jedi is fast approaching. Although Disney and Lucasfilm were once fairly tight-lipped about the eighth episode in the saga, we’re now starting to get a much better sense of what to expect this time around. Director Rian Johnson was recently interviewed by USA Today, and he shared some revealing comments about the future of the Resistance after the departure of Leia Organa.

Johnson also provided a few other insights into where our favorite characters head in The Last Jedi. In a behind-the-scenes video, we see the Looper director geeking out on set while the movie’s cast praise his abilities. Here’s what we just learned about Star Wars: The Last Jedi via the new interview.

The heroes are on their own this time

You’ll see characters thriving on their own. | Lucasfilm

Like The Empire Strikes Back and Attack of the Clones before it, The Last Jedi will see the main characters of the film splitting up, with Rey, Finn and Poe getting completely separate storylines. Johnson says that he did this deliberately, as he wanted to really challenge these characters and deprive them the comfort of having friends around.

When I first read the script of The Force Awakens, I was like, “I feel like I know these characters instantly.” And now we get to kind of put them through a meat grinder. (Laughs) And for me, part of that meant that we had to make things as hard on each of them as possible: At least part of the movie, they don’t have their friends around. They’ve got to figure things out for themselves. They’ve got to be faced with whatever the toughest thing each of them can be faced with, and they’re not going to have their buddy there next to them to get them out of it, necessarily.

In The Last Jedi, Rey, Finn, and Poe each have their own adventures to go on, at least for a good chunk of the movie. Rey will spend some time on Ahch-To with trainer Luke Skywalker and learning about the true nature of the Force. Finn will begin the movie in a coma after his battle with Kylo Ren in The Force Awakens, but he ends up on an adventure with a new character, Rose Tico, traveling to a casino planet and eventually going undercover as a First Order officer.

It’s not quite clear what Poe Dameron’s mission is, but we know he’s doing something for the Resistance and has a large amount of screen time with General Leia Organa, as Oscar Isaac told Stephen Colbert.

Going undercover will be tough for Finn

It will be particularly challenging for Finn to go undercover with the First Order. After all, he just recently escaped from the First Order and is still dealing with feelings regret and shame for serving as a Stormtrooper. Now, in The Last Jedi, he finds himself returning to the place he hoped never to see again. Johnson told USA Today that this was his answer to the question of what would be most difficult for Finn.

When asked if Finn freaks out when he goes undercover, Johnson said:

Man, I would if I were him. Just think of the moral courage it took, and how much just physically it took, to get away from the First Order. It’s that thing of coming back to ‘What’s the thing that would be toughest to throw at each of these people?’ And to go back into the machine, to put that uniform on again, made a lot of sense to me.

Exactly what circumstances lead Finn to go undercover as a First Order officer aren’t clear, but we know that he does so with Rose Tico and with DJ, a mysterious new character played by Benicio Del Toro. As seen in the most recent trailer, Finn also ends up battling Captain Phasma, who he threw into a trash compactor near the end of The Force Awakens.

Leia’s role in the film will continue to be an important one. | Giphy

But even though we may not be witnessing the death of Leia Organa in The Last Jedi, the movie still carries the weight of being Carrie Fisher’s final Star Wars performance, and Johnson expects the next few months to be both sad and joyful as a result. As he told USA Today:

Having these scenes in the film recontextualize tragically with her not being here anymore, it’s incredibly emotional. For the next few months, seeing the fans…process the loss and celebrate her as Leia one last time, it’s going to be intense. I think it’s going to be really sad but really joyful, I hope. She really kicks (butt) as General Leia, and I’m happy for that.

Poe and Rey will meet in the movie

The new interview with Johnson also included a behind-the-scenes video, and the video reveals a few juicy details. The first is that Rey and Poe Dameron actually meet in The Last Jedi. They never crossed paths in The Force Awakens (though they did in the novelization). The video shows a brief shot of Daisy Ridley and Oscar Isaac on what looks like the Millennium Falcon set. Presumably, this is sometime near the end of the movie, as a previous behind-the-scenes video indicted that Rey ends up on Crait, where Poe participates in a battle.

Another interesting tidbit  from this video is that Benicio Del Toro’s character, DJ, goes undercover with Finn and Rose as a First Order officer. From previous interviews and trailers, we know that Finn and Rose go undercover. But this clip also shows a brief shot of Del Toro walking with the two in the First Order uniform — the first time we learned the mission involves his character as well. Finn and Rose apparently meet DJ on the casino planet of Canto Bight, and at some point after that, the three infiltrate a First Order Star Destroyer.

Finally, this new video also shows a brief shot of Rey in the rain, looking angry and pointing her staff downwards — which seems to be the same scene as when an enraged Luke says in the recent theatrical trailer, “This is not going to go the way you think!” There had been some questions about who he is talking to when he says that, but this video suggests it was Rey.

The cast and crew all love Rian Johnson

The Star Wars movies have had multiple instances of on-set issues, with Disney firing the directors of both Solo and Episode IX this year. But if one thing’s clear from the behind-the-scenes video of The Last Jedi, it’s that everyone absolutely loves Johnson and had a great time working with him.

In the newly released video, Fisher in particular heaps praise upon the 43-year-old director, saying, “He has flaws in other areas. I just don’t know about them.” Gwendoline Christie also notes that Rian’s “wonderful personality is all over this film.” In another shot, the entire crew gathers for a massive birthday celebration for Johnson.

Johnson, who was three years old when the original Star Wars came out, also said making the new film is a dream come true — and fairly overwhelming. He adds that he kept going back and forth between approaching the work with intensity and then suddenly realizing that he’s really making a Star Wars movie.

“Once in a while, you’re taking a little break and you’re sitting around and you get the holy crap moment again,” he said. “Concentrated work split up by holy craps.”

Does he have what it takes to become the leader of the Resistance? | Giphy

According to Rian Johnson, Leia thinks Poe has potential, but he’s not quite ready yet. When asked if Leia sees Poe as a future Resistance leader, Johnson said:

Yeah, I think so. He’s also got some growing to do. Poe’s got to grow. She definitely saw that potential in him and in The Last Jedi, we dig into that more. We’ve seen how heroic he is and now we’re going to see him challenged in terms of stepping up to the next level. It takes more than heroics to be a leader, or so I’m told.

There’s no guarantee that Poe will become the leader of the Resistance in The Last Jedi. Though it seems like the natural evolution of his character, it’s possible this development won’t happen until Episode IX. As Johnson suggested, Poe needs to grow a bit more until he reaches that position.

If Poe doesn’t take over for Leia immediately, one other strong candidate for Resistance leader would be Amilyn Holdo, a new character played by Laura Dern in The Last Jedi. Holdo is vice admiral of the Resistance, so it would make sense for her to become the new leader before Poe Dameron, a commander, gets the job. 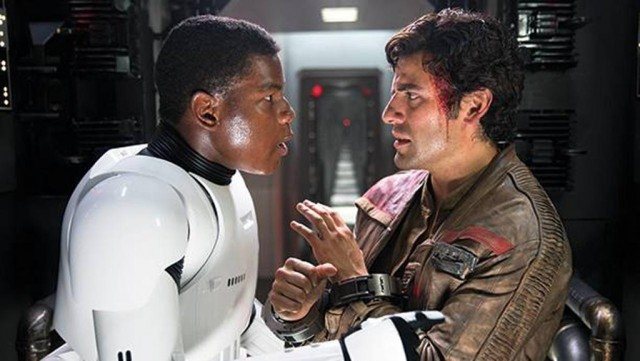 One other reason to suspect that Poe won’t become the Resistance’s new leader so easily is that he evidently has some conflicts with the group in The Last Jedi. The first hint at this came back in May, when Isaac told Vanity Fair that there’s a scene in the movie where Fisher slaps him. It’s difficult to imagine Leia slapping Poe unless they’re really at odds and her frustration with him reaches a boiling point.

Another hint came from a description of Poe used to promote an official piece of merchandise back in September. The description read, “It takes a defiant courage to stare down the threat of the First Order and while Captain Poe Dameron is eager to fight, he worries that some in the Resistance leadership don’t have what it takes.”

Finally, another piece of merchandise identified Poe as a captain, a step down from commander, and when asked if Poe gets demoted in The Last Jedi, Lucasfilm Story Group member Pablo Hidalgo said on Twitter, “You’ll find out in December. :)”

Perhaps Poe’s concerns are with Amilyn Holdo, who Poe might feel is not up to the task and is too gun-shy in taking on the First Order. Leia could side with Holdo, which would explain why she slaps him in one scene. By the end of the movie, Leia could see that Poe was right all along and therefore decide to promote him, setting the stage for him to become the new leader of the Resistance. Alternatively, she could remain sided with Holdo, with Holdo stepping in for Leia in Episode IX.

Which of those scenarios happens is anyone’s guess, but either way, it sounds like becoming a leader like Leia won’t exactly be smooth sailing.

Poe may go too far for the Resistance

Poe may devote too much attention to the First Order. | Giphy

There has also been some recent evidence to suggest that Poe might actually go too far in his dedication to the First Order, and this could be part of what caused a conflict between him and the Resistance in The Last Jedi.

Recently, an official Star Wars Japanese website posted biographies of all of the major characters, and a translation of Poe’s description reads:

This makes it sound like Poe may be so concerned about the threat of the First Order that he begins using tactics that the Resistance feel are too extreme. His actions may remind fans of Saw Gerrera, the anti-Empire fighter introduced in Rogue One who uses extremist tactics that cause the Republic to distance itself from him.

Star Wars loves to mirror itself, so could Poe flirt with darkness a bit in The Last Jedi, the same way Rey seems to be flirting with the dark side? We’ll find out when The Last Jedi opens on Dec. 15, 2017.