‘Star Wars’ Ranking: The Most Hated Scenes in the Entire Saga

For being one of the most celebrated movie franchises of all time, Star Wars is full of a surprising number of scenes that fans absolutely can’t stand.

A lot of those scenes come from the prequel trilogy, which was famously hindered by poor dialogue and subpar acting. But the original trilogy isn’t flawless, either; there are a few sequences in there that make even the most hardcore fans cringe during annual rewatches. And now, with The Last Jedi, there’s one moment that viewers still can’t stop complaining about.

Here’s a look at the 10 most hated scenes from the Star Wars saga, ranked from least to most hated. We’ll only be focusing on the main movie series here, not counting The Clone Wars or the Holiday Special.

10. Anakin and Padmé talk by the fireplace — Attack of the Clones 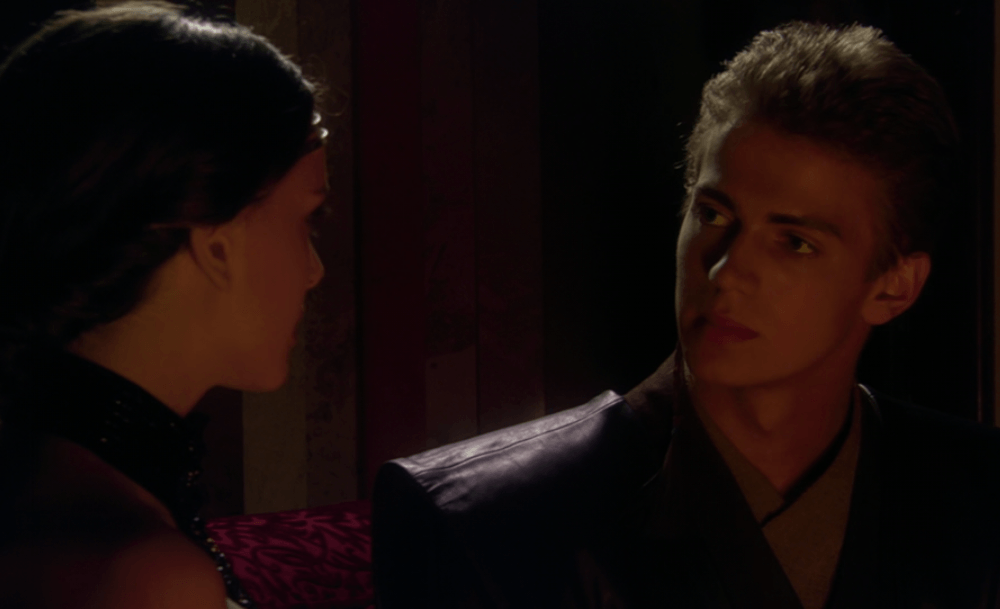 The biggest failure of the entire prequel trilogy lies in the romance between Padmé and Anakin, which is so poorly executed that two different scenes related to this plotline made our list.

The first comes about an hour into Attack of the Clones, when Anakin and Padmé talk after having dinner together. First, Anakin tells Padmé that he has thought of her every day since he met her as a nine-year-old boy. “And now that I’m with you again, I’m in agony,” he says. “The closer I get to you, the worse it gets. The thought of not being with you, I can’t breathe.” The dialogue is some of the worst in Star Wars history.

Theoretically, the idea is that Anakin and Padmé both want to be together, but Padmé is hesitant because she’s a senator and shouldn’t be with a Jedi. But all throughout the movie, and in particular during this scene, Anakin just comes across like a whiny psychopath who is sexually harassing a young woman who wants nothing to do with him. It’s hard to mess up a romance plotline more than that.

Next: This scene from The Last Jedi is already highly controversial. 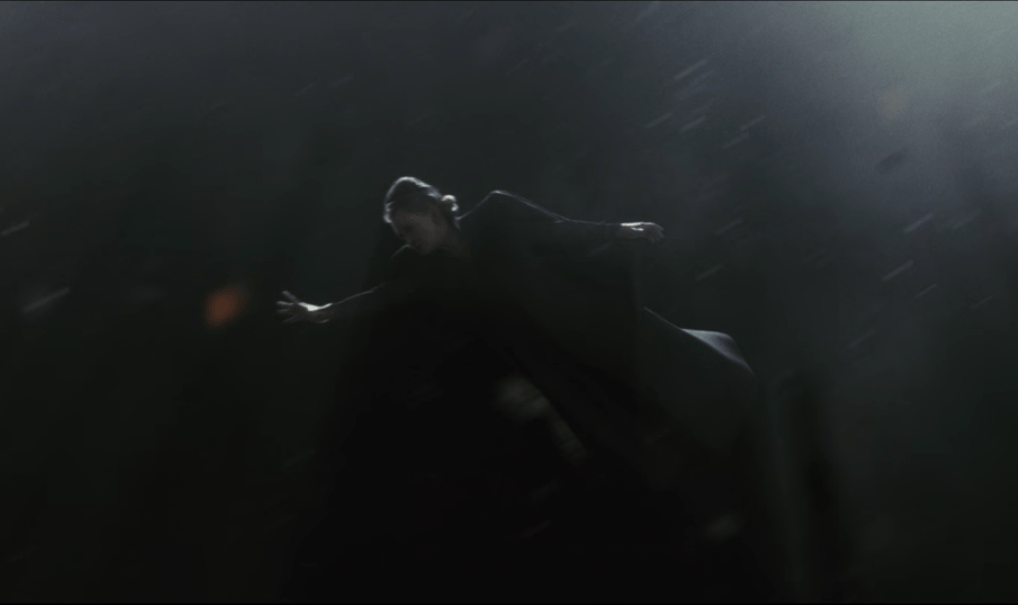 By far the most ridiculed scene from The Last Jedi is the one in which Leia is shot out into space, only to save herself using the Force. There’s actually a lot to like about the sequence. For one, we finally get to see Leia use the Force, something we’ve been waiting to see since we learned the nature of her relationship with Luke in Return of the Jedi.

But the scene has been criticized mainly just due to the visual effect, which is definitely a bit silly and unfortunately calls Mary Poppins to mind. The image of a person magically gliding across the screen is hard to make look cool.

Now, if you ask anyone who didn’t like The Last Jedi what their issues with the movie were, it’s a pretty safe bet that they’ll mention this scene.

Next: This is the first scene on the list to come from the original trilogy. 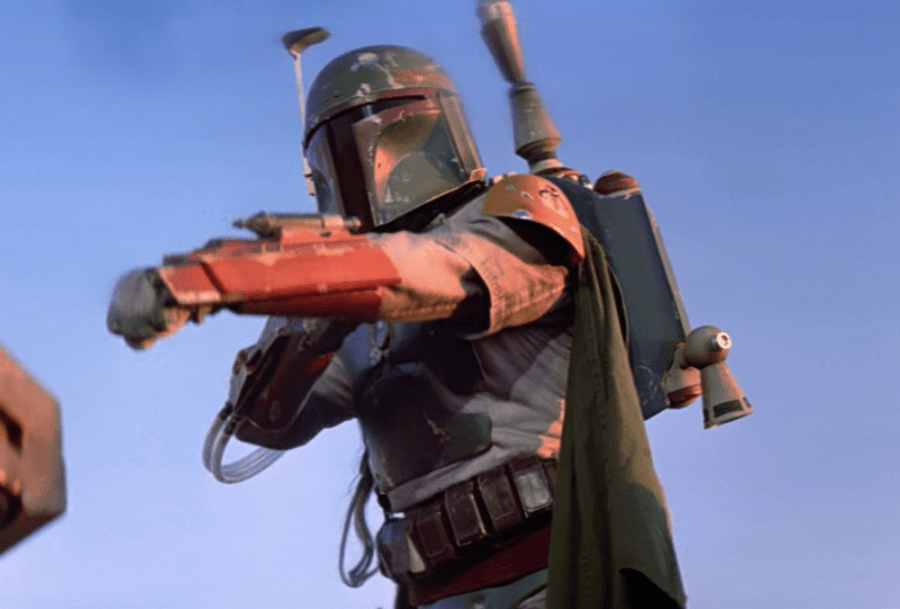 After Boba Fett has been built up so much, both by fans but also through canon materials like comic books and video games, it’s pretty hilarious to look back on how he actually goes out. A legendary bounty hunter who has been a threat to Han Solo for two movies literally dies by accident.

During the fight sequence above the Sarlacc in Return of the Jedi, Boba Fett tries to shoot Luke. But before he has a chance, a discombobulated Han Solo accidentally knocks into Boba’s jetpack, causing it to launch him up and into the Sarlacc.

Sure, Boba Fett was never one of the main villains. But he was at least a cool minor antagonist in the way that Captain Phasma is in the new movies. Leading up to a confrontation between Boba and Han, only for one of them to kill the other by pure accident, sure was disappointing.

Next: This scene contains a line of dialogue so bad that fans ironically quote it. 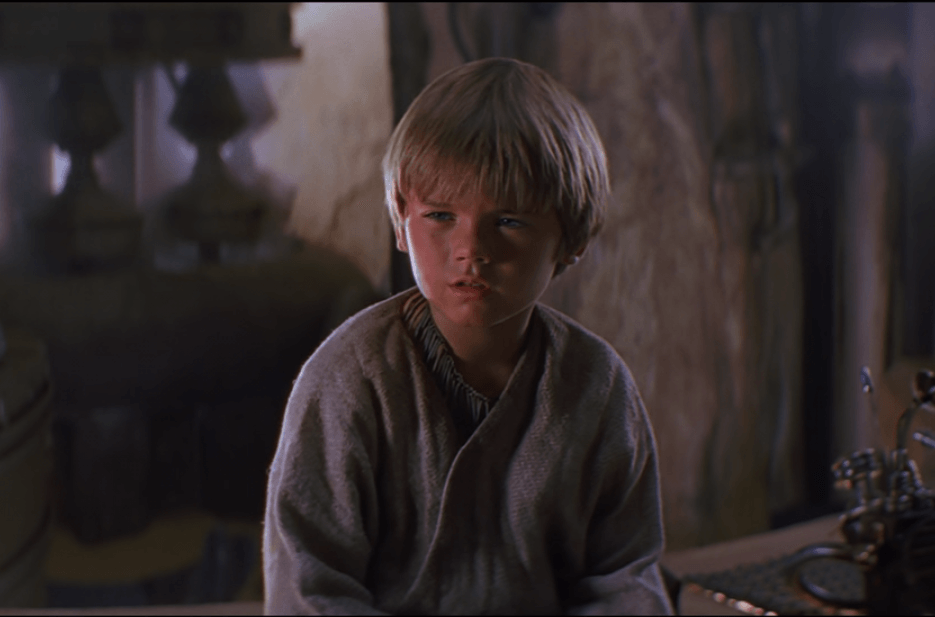 Anakin in The Phantom Menace | Lucasfilm

Jake Lloyd received nothing but torment for his performance as young Anakin in The Phantom Menace. But to be fair to him, even the most gifted young actor in the world would have struggled with dialogue as bad as this.

In one of Anakin’s early scenes in the movie, he interacts with Padmé for the first time and asks her, “Are you an angel?” When she seems confused, he says, “An angel. I heard the deep space pilots talk about them. They’re the most beautiful creatures in the universe. They live on the moons of Iego, I think.”

Clearly, we’re supposed to think Anakin is really cute, but the line is just an eye-roller, which is made all the stranger by the knowledge that these two are eventually going to get married.

Next: This was the most-hated moment from Revenge of the Sith.

6. Darth Vader screams “No!” — Revenge of the Sith 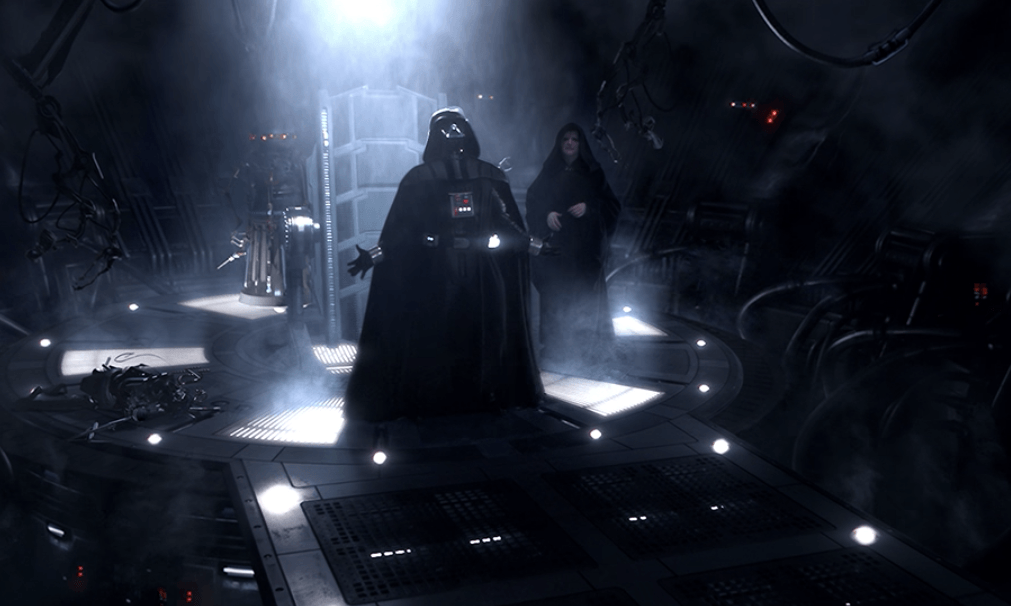 This is a unique example where a scene is going pretty well until one moment at the end completely ruins the whole thing. We’re referring to one of the final moments of Revenge of the Sith, in which Anakin Skywalker steps out in his Darth Vader suit for the first time. It’s an iconic development that fans had been waiting to see for decades.

But it’s ruined by the fact that, when Palpatine tells Anakin that Padmé has died, he lets out a long, protracted “Noooooo!” This is an incredibly cheesy line in a scene that should be pretty serious and heartbreaking, and it quickly became the most widely mocked moment of the movie.

Years later, George Lucas would retroactively insert a “Noooooo!” into the ending of Return of the Jedi, which only made fans more irate. 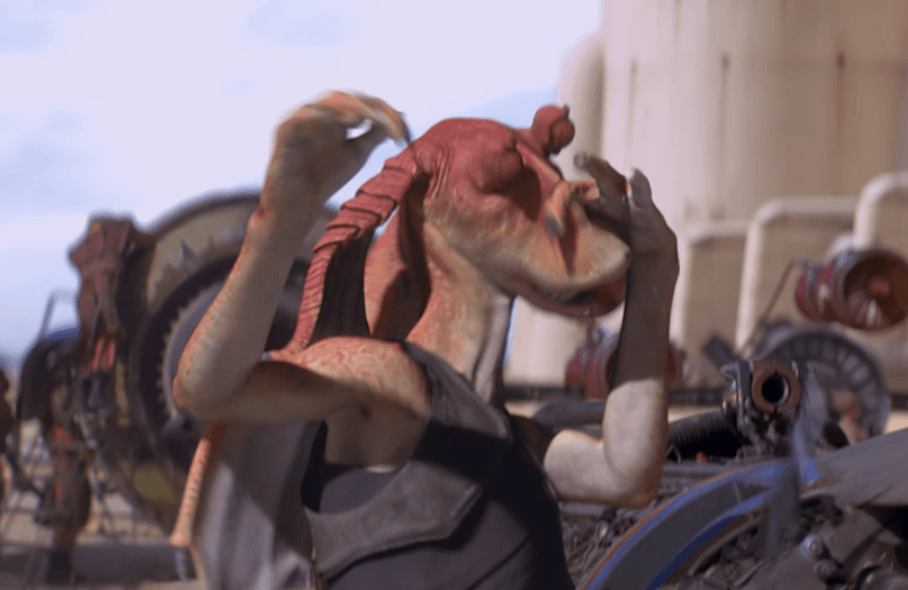 Really, this entire list could just consist of Jar Jar Binks scenes. But we’ll narrow it down to the most commonly criticized one. As Jar Jar is waiting for the podrace to start, an alien farts on him. It’s a pretty short little moment, but it exemplifies everything fans abhorred about Jar Jar — namely that he’s a cheap, unfunny comic relief character whose humor seems to be directed exclusively at those under the age of four.

There’s really nothing to the joke other than that it’s funny to see someone get farted on; even the sound effect sounds like something out of a cartoon. This also came after an earlier scene in which Jar Jar steps in poop.

Every other Jar Jar scene is pretty bad, too. But when asked for one that’s particularly offensive, most fans will point to this one.

Next: This change to the original trilogy almost ruins a great sequence.

4. Jedi Rocks — Return of the Jedi 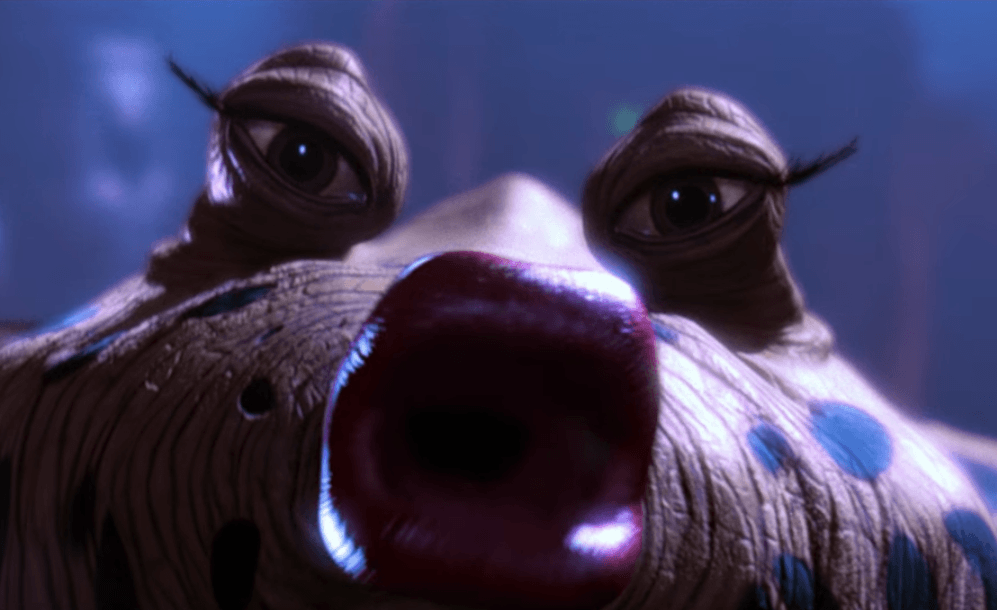 In the original version of Return of the Jedi, during the Jabba’s Palace sequence, the Max Rebo Band performs a song called “Lapti Nek.” It’s no masterpiece, but it’s a decent song that a lot of fans have fond memories of enjoying when they were younger. Apparently, George Lucas was never really happy with it, though. And so he replaced it with a whole new song for the special edition: “Jedi Rocks.”

The new song is way more annoying, but what’s worse is the fact that it’s sung by a bunch of ridiculous looking aliens who were added in using digital effects. Since everything else in the scene is practical, they stick out like a sore thumb. Plus, they break the fourth wall and sing directly into the camera, something that feels totally out of place in Star Wars.

Since the special editions of the original trilogy are the only ones that are available, it’s unfortunately no longer possible to legally watch a high-quality version of Return of the Jedi without “Jedi Rocks” stuck in there.

Next: Another special edition change that ruined a part of the original trilogy. 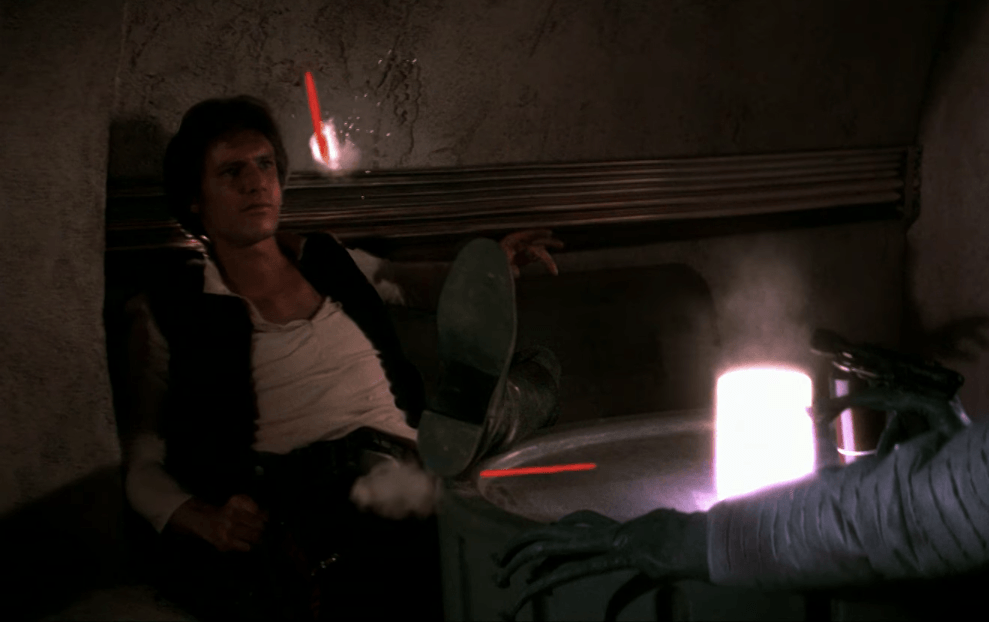 And here it is: one of the most controversial moments in Star Wars history, once again relating back to the special edition. Famously, in the original cut of Star Wars, Han shoots Greedo when Greedo confronts him in the Cantina. He’s doing so in defense, as it’s clear that Greedo is about to kill him. But for the special edition, Lucas altered the scene so that Greedo shoots Han first.

Lucas was apparently afraid the original cut made Han look like a murderer. But it was already pretty clear that Han was shooting Greedo in defense, and the change just made a classic scene a lot less effective. The worst part is the fact that in the special edition, Han’s head is digitally moved to the side slightly so as to avoid Greedo’s blast. The effect is so terrible that it’s unintentionally hilarious.

This change proved to be so controversial that “Han Shot First” would be plastered onto mugs and T-shirts everywhere for years, and it became the go-to example of why Lucas had lost it.

Next: This scene introduced a concept to Star Wars that fans detested. 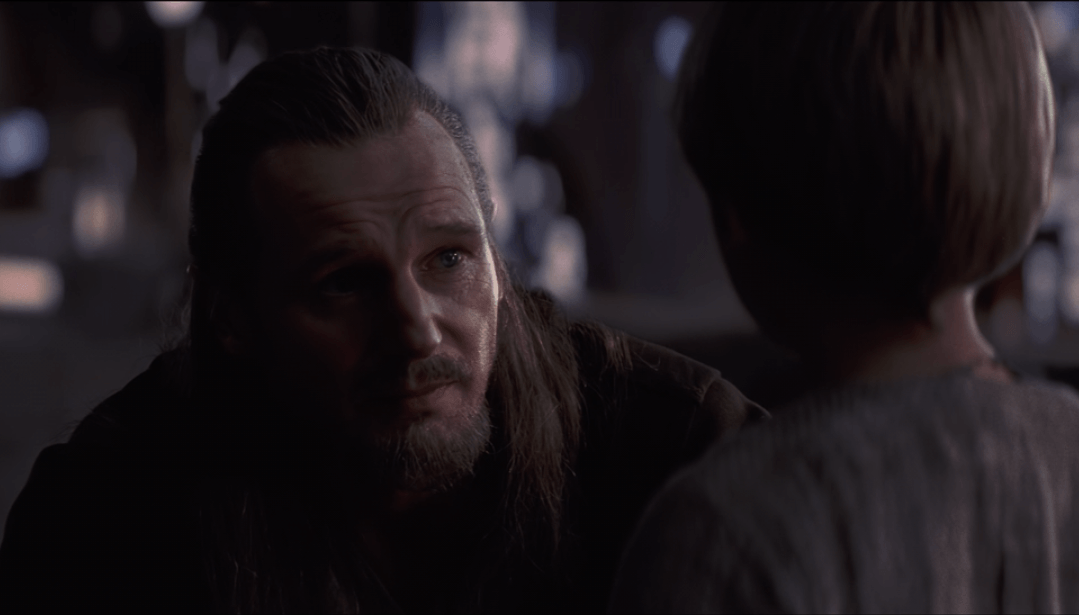 The Force is fairly mysterious throughout the original Star Wars trilogy. We really don’t know that much about what it is or how it works, other than that it surrounds us, penetrates us, and binds the galaxy together. But then came The Phantom Menace, which introduced the concept of Midi-chlorians, microscopic life forms that measure how strong a person is in the Force.

To be fair, contrary to popular belief, Midi-chlorians don’t actually really explain the Force; they’re not the reason the Force exists but rather a way of measuring it. Still, fans hated the idea of taking a mystical concept and boiling it down to something scientific that can be given a number and examined like cells.

The idea was so despised that the word “Midi-chlorians” was only used a handful of other times throughout the prequel trilogy, and it has never come up again in the new Disney era. Because of this backlash, we’ll very likely never hear anything about Midi-chlorians in any future Star Wars content.

Next: This is without a doubt the most hated Star Wars scene ever. 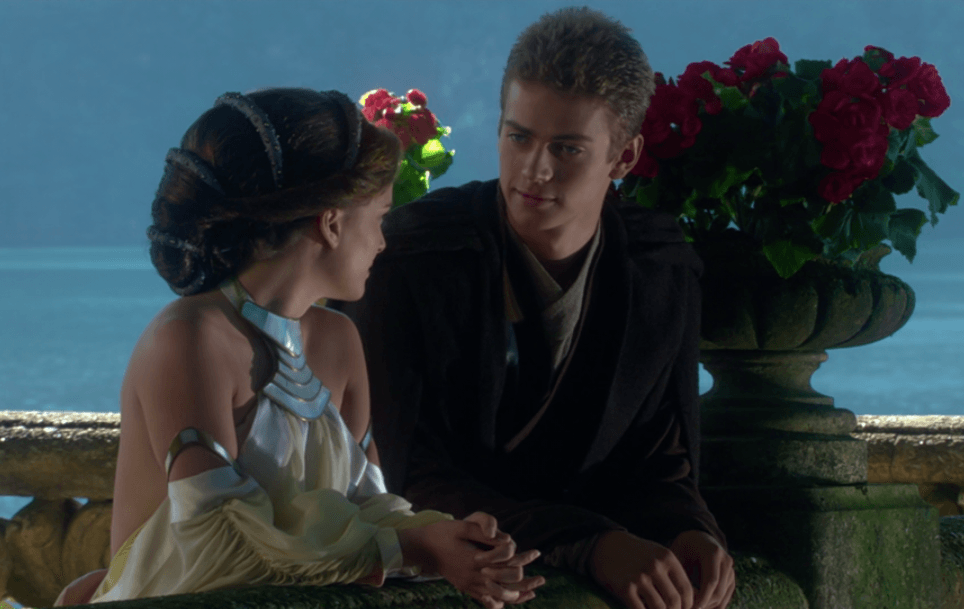 There is no more widely mocked scene in the entire Star Wars saga than this one from Attack of the Clones, which is so disastrous that fans are still making fun of it over 15 years later.

We already talked about how the romance between Anakin and Padmé is completely unconvincing. But the absolute lowest point of their subplot comes when Anakin explains to Padmé, “I don’t like sand. It’s course, and rough, and irritating, and it gets everywhere. Not like here. Here everything is soft and smooth.”

The scene fails on basically every level. It’s incredibly on-the-nose, the delivery is terrible, and it’s meant to sound romantic when it’s not at all. To this day, “I don’t like sand” is one of those bad movie lines that’s quoted in the same fashion as “You’re tearing me apart, Lisa!”

Really, barring something going horribly, horribly wrong with the Disney movies in the immediate future, this will very likely remain the most hated Star Wars scene for quite some time.