The Empire Strikes Back | Lucasfilm

We’re counting down the days until the next Star Wars entry, The Last Jedi, finally hits theaters. Not only does the movie promise to deliver some long-awaited answers, it’s also sure to feature some epic battles. Each of the Star Wars trilogy movies contains at least one climactic lightsaber showdown, so it’s worth looking back on the history of the franchise’s best duels in a definitive ranking.

Before moving forward though, it’s worth acknowledging the also-rans (mostly from Revenge of the Sith): Mace Windu vs. Darth Sidious, Yoda vs. Darth Sidious, and Obi-Wan/Anakin tag-teaming against Count Dooku. That leaves us with the 10 remaining showdowns that in a lot of ways, have come to define the Star Wars universe.

Many would expect Darth Maul’s battle with Qui Gon Jinn and Obi Wan Kenobi to make this list, but in fact the most entertaining Maul-related lightsaber showdown took place during the Clone Wars cartoon series. To understand why, we need only observe the stakes here: Pre Vizsla, a native Mandilorian having just seized control of his planet’s throne, finds himself challenged to single combat by the recently resurrected Darth Maul (an infinitely more interesting version than the one who appeared in Episode I). The stakes here were clear: If Maul wins, an entire planet is subjected to his tyrannical rule.

For the Phantom Menace fight between the Sith Lord and Jedi, it’s a 5-minute hyper-choreographed snoozefest, where victory for either side really changes nothing in the wider scheme of the film. We have no real idea of who Darth Maul is, or even why he needs to be stopped, and the end result is an underwhelming climax to an already weak movie.

9. Count Dooku vs. Yoda, Attack of the Clones

Yes, we’re leaving off the Anakin/Obi Wan part to this battle in its own honorable mention category, and trust us when we say that’s by design. The real highlight of that sequence came when Yoda entered the fray, giving us our first taste of the mightiest Jedi to ever live in action. After Count Dooku handily dispatched both Anakin and Obi Wan, it was clear that the real fight here was about to take place the second Yoda unsheathed his weapon. At a tidy 2 minutes long, it showed that not every duel needs to span an eternity in order to be effective.

Here we have another place on the list occupied by the incredibly well-constructed animated universe, this time from Star Wars: Rebels. For wayward Jedi Kanan and his young apprentice Ezra Bridger, taking on Darth Vader is ultimate example of being out of your depth. Vader is more than simply an opponent, acting as a pure, unstoppable force of nature.

The most telling moment of the entire sequence comes in the moments after the duel. Ezra, clearly panicked from the terrifying encounter, asks Kanan how they’re supposed to fight Vader. Equally as unsettled, Kanan responds only by aptly pointing out, “We were lucky to survive.” It’s quintessential Vader at his most villainous, and has since set the tone for the much-anticipated second season of the animated series.

There’s a whole lot of emotional weight that comes with this particular showdown. In Dave Filoni’s Clone Wars animated series, Ahsoka Tano is introduced as Anakin’s first and only apprentice. The two develop a close personal friendship, fighting alongside each other for years, before Ahsoka eventually leaves the Jedi Order. Fast forward a couple decades, and she’s one of the last living Jedi, while her former mentor and friend has become Darth Vader. Her battle with Vader in the Season 2 finale of Rebels is heartbreaking to say the least, pitting the two former allies against each other in a fight for survival.

6. Darth Vader vs. everybody, Rogue One 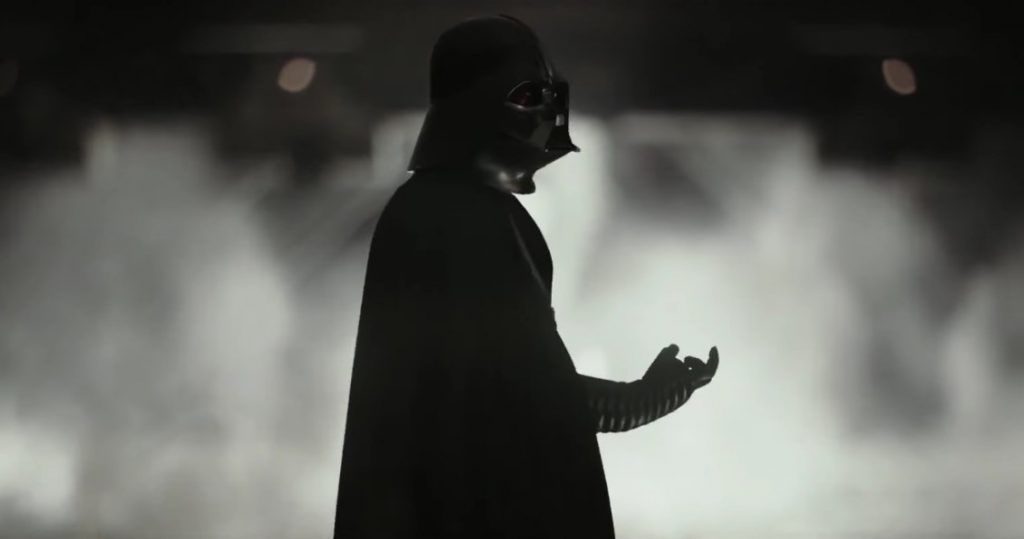 This one may have been a tad one-sided, but it’s still worth mentioning all the same. The scene in question builds on Lucasfilm’s recent quest to reestablish Vader as the quintessential badass, as he violently carves through a hallway of unfortunate Rebel soldiers. It’s a moment that looks like something straight out of a horror movie, and more than that, is the crowning moment of Rogue One.

5. Obi Wan vs. Anakin Skywalker, Revenge of the Sith

The Obi Wan/Anakin duel from Revenge of the Sith marked the turning point in the Star Wars story, and for that it gets a place on the list, albeit not one that exceeds anything from the original trilogy. Here we have a fight between two people who were friends for over a decade, forced to be at odds by… well, something. Anakin essentially stumbled into becoming the villain, and nothing about his transformation felt anything but awkwardly shoehorned in. But for now, let’s set that aside as a debate for another day.

Instead, we’ll dig into the specifics of the duel itself. Its almost 10-minute runtime holds back what otherwise was the strongest lightsaber showdown the prequel trilogy had to offer, ending with the inevitable severing of Anakin’s limbs. Throughout that 10 minutes, we see opportunities for true emotion squandered until the very final moments, limiting the potential of what could have been the seminal moment in the Star Wars saga.

What this one lacks in choreography is more than made up for with subtext. For this duel, we have the first encounter between Vader and Obi Wan since their fateful battle on Mustafar. Both are different men, and in a lot of ways it’s the grudge match of the century. Incidentally, it doubles as the first lightsaber duel the Star Wars franchise ever gave us, making us all feel Luke’s grief as he watches his friend and master struck down as he stands by defenseless. It set the tone for the remainder of the trilogy, and to this day still holds the same emotional weight. 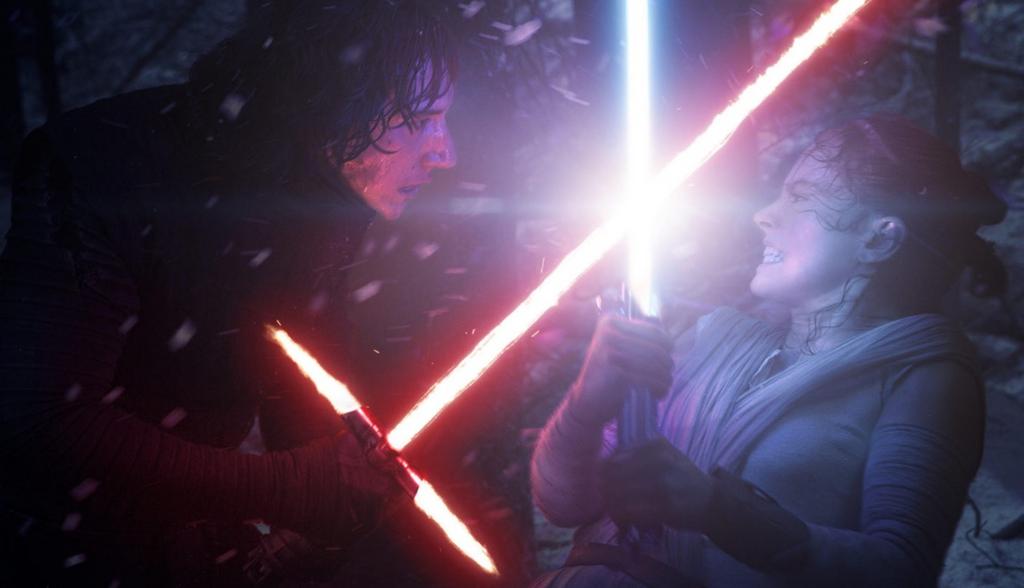 This one is incredible based on the context alone: Han Solo has just been murdered in cold blood by his own son, while Rey and Finn were only able to look on in horror. The battle itself feels like something straight out of a martial arts movie, as the snow falls around around characters. When Rey picks up the lightsaber following Kylo Ren’s quick dispatching of Finn, it represents an iconic Star Wars moment. Her subsequent victory manages to be the icing on the cake, setting the stage for what’s sure to be a grand reveal of her true identity in Episode VIII.

2. Luke Skywalker vs. Darth Vader, Return of the Jedi

Speaking of grudge matches, this one between Luke and Vader marked the conclusion of the original trilogy. Luke is now (somehow) a fully trained Jedi, and is forced to make the decision between giving in to his hate, and believing his father could really find redemption. The fate of the entire Galaxy rested on the shoulders of this encounter, and ended with the stunning turn of events that had Vader tossing the Emperor down a shaft to his death. While not the edge-of-your-seat thrillride that our next and final duel is, it still holds a special place in the Star Wars canon if for no other reason than its sheer stakes.

1. Luke Skywalker vs. Darth Vader, The Empire Strikes Back

There’s no showdown that rivals the first battle between Luke and Vader, and it’s not even close. This encounter features the iconic “No, I am your father” moment, coming at the end of a duel that makes it seem as though Vader is playing with his food more than struggling. It shows the true power of the force (no pun intended) Luke is up against, and demonstrates just how difficult a struggle he has ahead of him. More than that though, it’s the climactic fight in the best installment the franchise has to offer, and for that, it earns our top spot.