Star Wars Rebels is wrapping up their fourth and final season this spring, and there are a lot of story lines to finish up. We know how everything turns out with the Rebellion and the Empire, but what about Ezra Bridger? Because of what we know about the original Star Wars trilogy, Rebels need to reconcile with the fact that no Jedi existed outside of Obi-Wan Kenobi, Yoda, and eventually Luke Skywalker.

In the premiere of the second half of season four, (SPOILER ALERT) Rebels killed off fan-favorite and emotional-anchor Kanan Jarrus, leaving Ezra afraid and without leadership. Will Rebels go with a dark finish, killing off the second of their main characters? That’s possible, although it might be more likely that Ezra ends up turning to the dark side — something that has consistently been teased throughout Rebels’ entire run. That hit a fever pitch in the recent mid-season trailer, featuring the return of Emperor Palpatine. We looked at several reasons why Ezra Bridger turning to the dark side actually makes a lot of sense.

Ezra has a connection to the dark side 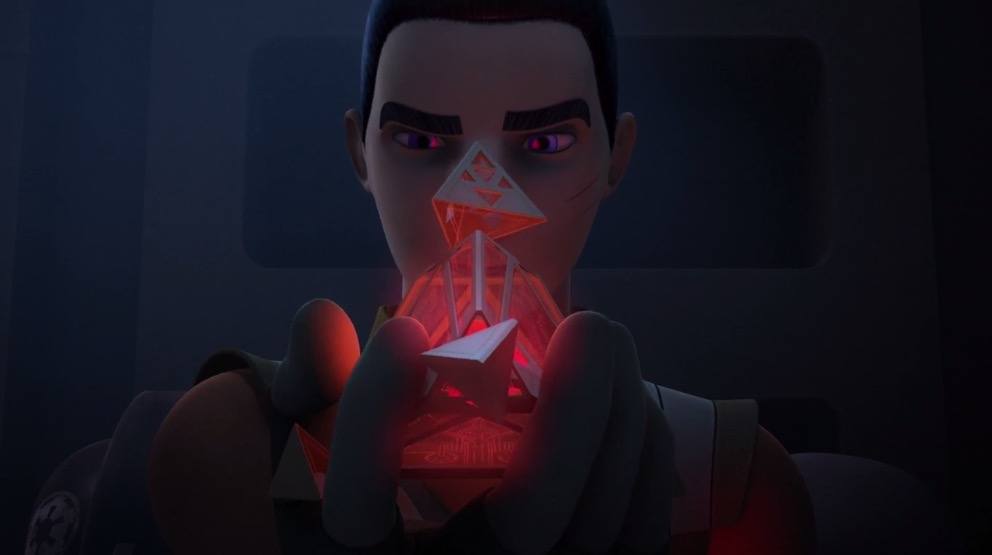 From the very start of Rebels when Ezra is first introduced, it’s clear that he’s Force sensitive. But unlike most Jedi, he was not trained from an extremely young age. Bridger was well into his teens before he met Jarrus, and he has a lot of anger toward the Empire over the death of his parents.

Then there is the Sith holocron, which Bridger shows an interesting connection to during the third season of Rebels. Eventually, Jarrus turns the holocron over to the Bendu, which is a neutral Force entity. But it’s well established that Ezra has struggled with his own dark side, and the notion that his story could take a tragic turn isn’t at all far-fetched. 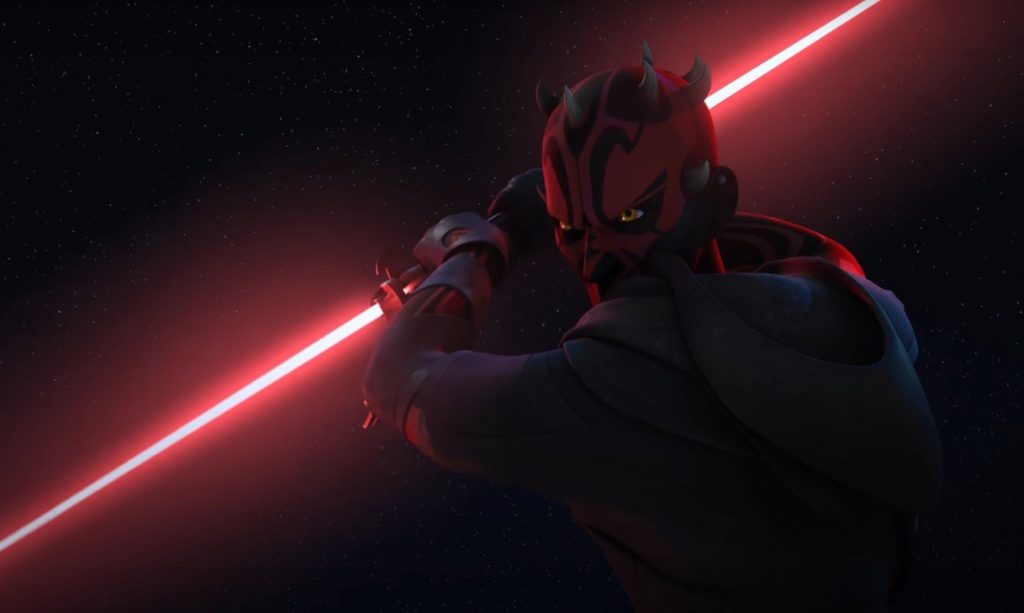 Another way that Ezra has a major connection to the Sith is his one-time acquaintance, Darth Maul. Bridger met Maul toward the end of the second season, helping him track down the Sith holocron on Malachor. Maul pushed to make Ezra his apprentice after seeing the young Jedi open the holocron by using the dark side of the Force.

Eventually, Bridger and Jarrus reconciled their relationship and Ezra pushed away from Maul. The fallen Sith’s story finally came to an end on Tatooine, where he challenged — and was killed by — Obi-Wan Kenobi. Maul helped Ezra take his first steps toward the dark side through their brief relationship, which could be a situation that the ever-present Darth Sidious was manipulating from afar.

Ezra has had his dark moments 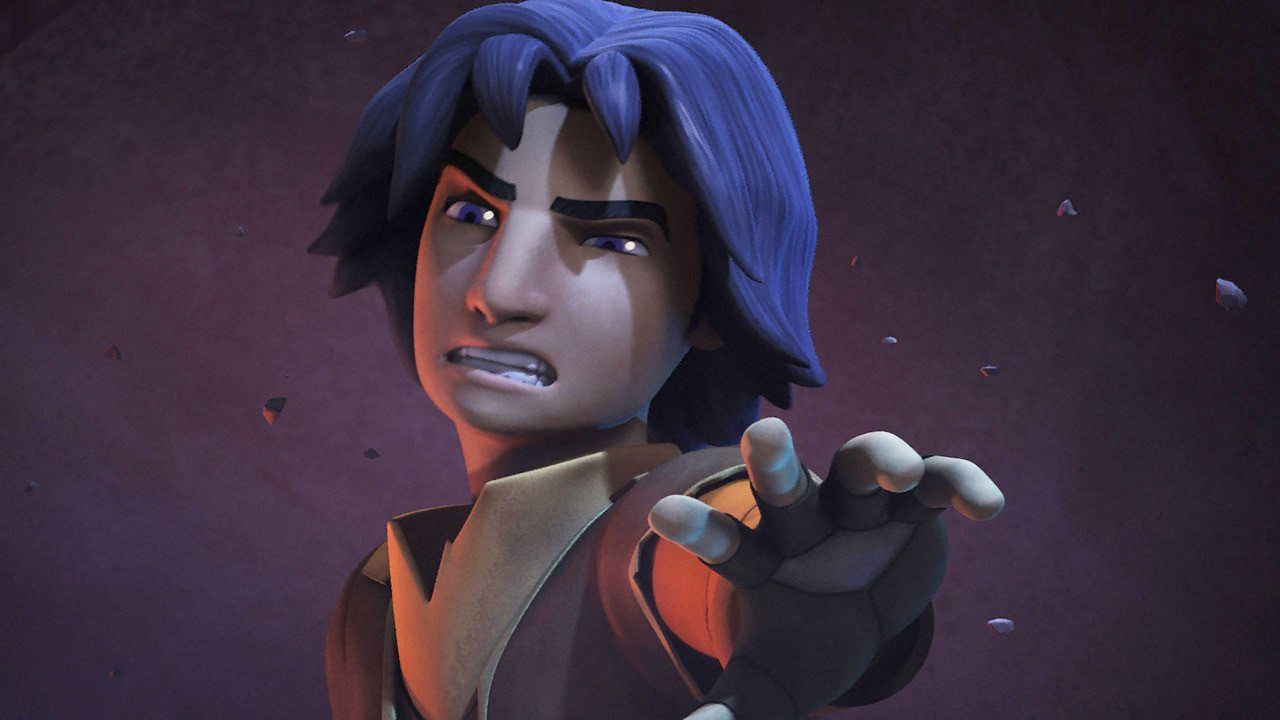 Ezra uses the dark side of the Force. | Disney XD

Let’s also not forget that Ezra is no stranger to letting the darkness in, from time to time. There was his battle with the Grand Inquisitor, and then later a time in which he used the Force to make a stormtrooper inside an AT-AT kill several other stormtroopers. Even Yoda sensed Bridger’s fear and anger.

There are a lot of similarities between Ezra and Anakin Skywalker. While Bridger lost his parents to the Empire, Skywalker lost his mother to the sand people. Both started their Jedi training late, and both thoroughly questioned the teachings of the Jedi. And like with Skywalker, the clues have been there all along for Ezra’s inevitable turn to the dark side.

It starts with the disillusionment 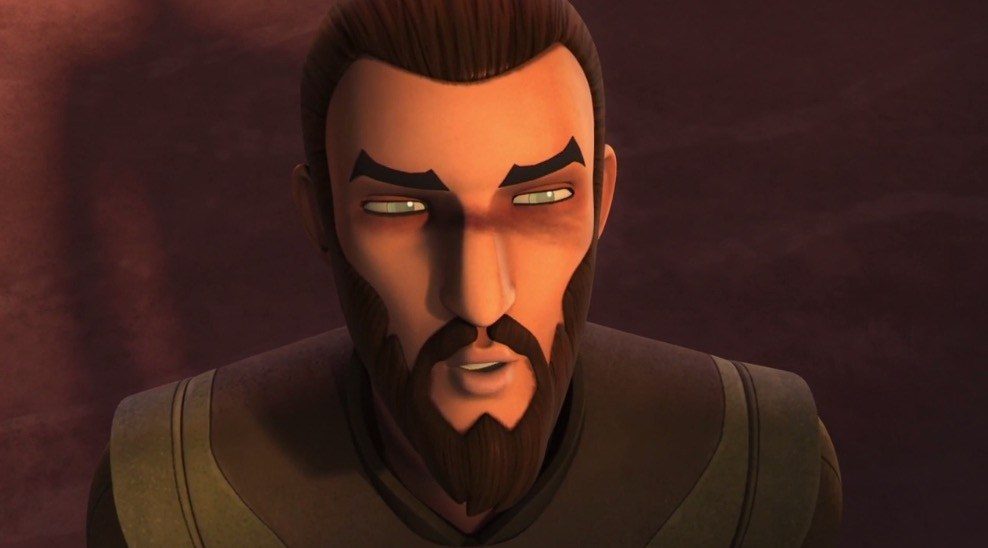 Bridger leaned everything he needed to know of the Jedi through Jarrus, who gradually became disillusioned by the order. The Jedi are long gone and the Sith now rule the galaxy, under the guise of the Empire. For the entirety of the series, Ezra has maintained his wish to destroy the Sith, once and for all. But that doesn’t mean he’s not vulnerable to his internal pull toward the dark side.

Bridger’s master didn’t exactly reach the conclusion of his own Jedi training. He was just a padawan named Caleb Dume at the time of Order 66, and he escaped and changed his name to Kanan Jarrus to hide from the Empire. Jarrus taught Ezra what he could remember of his own training, but with that, he also passed along his own doubts. Ezra Bridger learning about the failures of the Jedi Order from a first-hand source has left him vulnerable.

Palpatine is out to replace Darth Vader

This brings us to the big moment of the Rebels mid-season trailer, when we see Emperor Palpatine step out of the shadows in an apparent confrontation with Ezra. Ian McDiarmid returns to the iconic role officially for the first time since Star Wars: Revenge of the Sith to do the voice work, and is chilling in the one line that is heard: “Ezra Bridger, mine at last.”

Given everything we know about Palpatine, the best assumption is that he plans to make Ezra his new apprentice. Those who follow the Darth Vader comics done by Marvel will know that Palpatine was always on the lookout for someone to replace Vader, who he (somewhat rightfully) viewed as weak. The Emperor never could look past Vader’s loss on Mustafar to Kenobi.

So could Palpatine end up turning Ezra Bridger to the dark side, creating another secret apprentice with the hope that he could take over Vader’s role by his side? 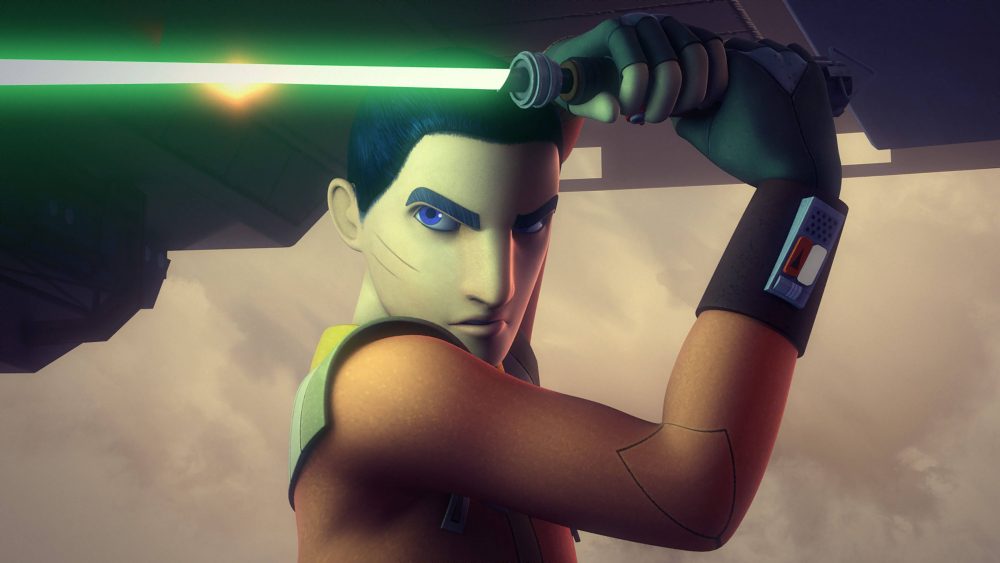 One of the biggest reasons to believe that Ezra may be traveling on the path toward the dark side is that the series is coming to an end. With Kanan gone and the events of Rogue One: A Star Wars Story and Star Wars: A New Hope just months away, it has become increasingly clear that Ezra will need to be dealt with, one way or another.

It made sense to kill of Kanan, even if it stung to watch. His romantic relationship with Hera Syndulla had reached its apex, and the Forces of Destiny YouTube shorts have keyed us in on the fact that Hera remains with the Rebel Alliance and is present on both Hoth and Endor. Given that Yoda informs Luke in Star Wars: Return of the Jedi that he is the last of the Jedi, it’s easy to see how there are few options for Ezra moving forward.

All these arrows are pointing him toward a potentially sinister fate. The trailer with Palpatine is really just the cherry on top. And let’s face it, Rebels wouldn’t have brought in McDiarmid to voice the Emperor if it weren’t for something monumental in Star Wars history. Either Ezra ends up turning to the dark side, or he dies. It’s hard to see Rebels killing both Kanan and Ezra.

Think of the possibilities 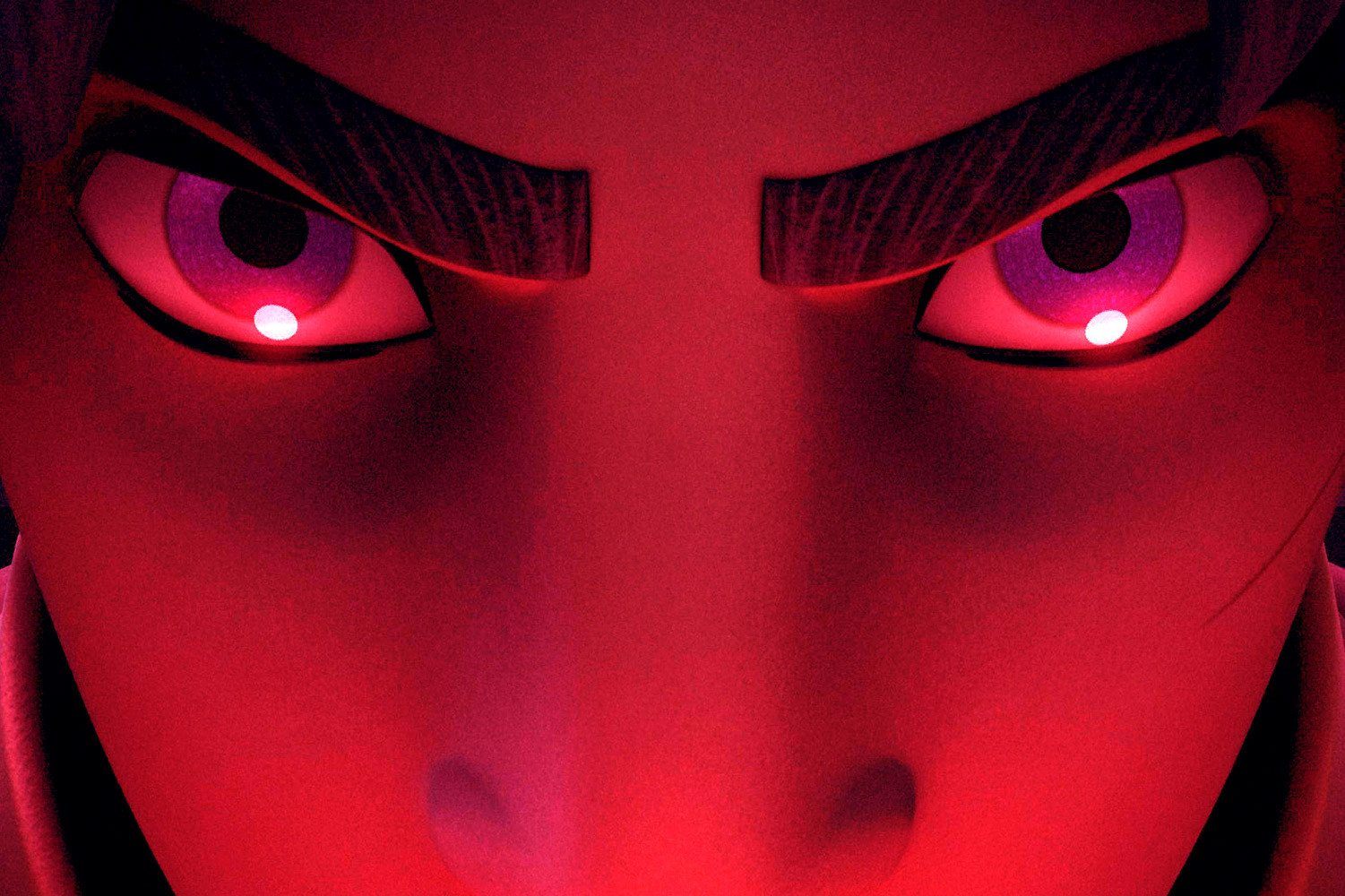 Star Wars could do a lot of things with Darth Ezra. | Disney XD

Imagine, for a moment, that the series ends with Ezra Bridger becoming the secret apprentice to Darth Sidious. Not only is that a game changer for the Star Wars universe, but it opens up a ton of possibilities. Some might argue that the existence of another apprentice to Palpatine during the the time of the original trilogy is blasphemy, but in reality that is already a part of canon. In the first Darth Vader Marvel comic, it was revealed that the Emperor was secretly creating a group of possible successors.

That all came to light shortly after the destruction of the Death Star, and although Ezra wasn’t among the group, Palpatine could easily have a different use for Bridger. What if Ezra survives the fall of the Empire? What if there’s an untold story between the end of Return of the Jedi and the beginning of the sequel trilogy that involves Bridger and Luke Skywalker going head to head?

There was, at one time, a pretty silly theory that Supreme Leader Snoke could be Ezra Bridger. That theory evolved into Benicio Del Toro’s mysterious character in Star Wars: The Last Jedi possibly ending up as a grown-up Ezra. None of that came to fruition. But it’s fun to wonder what lies ahead for the young Jedi. A spin-off movie seems unlikely, but a novel? His own comic series? Maybe even another TV show chronicling his later years? The possibilities are seemingly endless.