Amid all the Star Wars hype lately, the animated Rebels TV series has largely been flying under the radar. The series just wrapped up its second season with a one-hour finale jam-packed with treats, and finally, it’s generating buzz as a result. We saw the return of characters long thought to be gone from the Star Wars universe, as well as a much-anticipated showdown. All told, it was the best episode Rebels has ever featured.

The finale itself was incredibly dense. It neatly tied up some storylines, while blowing the doors off the hinges for others. Some of the questions answered were ones we’ve had ever since the main Clone Wars series wrapped up back in 2014, giving us some long-awaited closure. But since Star Wars: Rebels is far from over (and rapidly approaching the Rogue One timeline), there’s still plenty of story left to tell. Here’s what we saw in the Season 2 finale, breaking down all the implications for the future of the series, as well as the Star Wars saga.

1. Ahsoka Tano faces off with her old master

In the Clone Wars story, we learn that Anakin Skywalker actually took on an apprentice of his own while he was a Jedi. That apprentice was Ahsoka Tano, who we last saw walking away from the Jedi Order after being framed for a crime she didn’t commit. Tano resurfaced on Rebels as a member of the fledgling Rebellion, lending her considerable knowledge of the Force to former Padawan Kanan Jarrus and his own trainee Ezra Bridger.

With Anakin now having turned fully into the imposing Darth Vader, a final showdown between him and his former apprentice seemed inevitable. Ahsoka, still dealing with guilt over having left Anakin in his time of need, goes toe-to-toe with Vader as a result. She holds her own surprisingly well, leaving the Sith lord hobbled and bruised. Even so, her own fate remains up in the air when we see her caught at the epicenter of an explosion during the climactic duel. 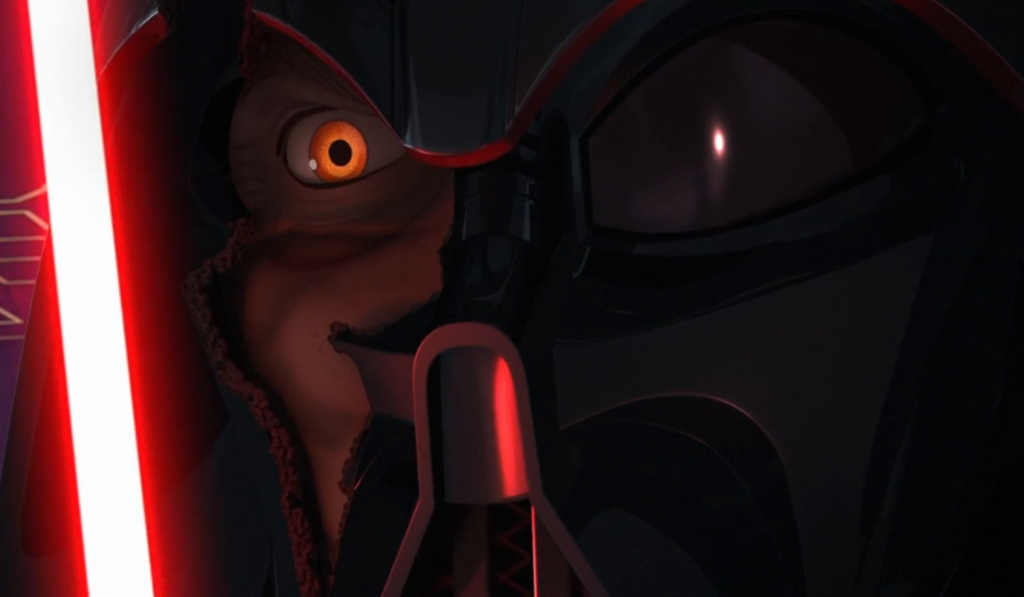 You can count on one hand the number of times we’ve seen Darth Vader’s face without his helmet. After Ahsoka lands a blow across the face of Vader, we get a good look at what’s become of Anakin Skywalker under the mask. We see similarities to the young Anakin from The Clone Wars, with those same yellow eyes he donned at the end of Revenge of the Sith. It’s a version of a man who’s been consumed by his hatred and misery, not yet aware of the existence of his children, Luke and Leia. An extension of that brings us a Vader who’s miles away from his redemption in Return of the Jedi.

3. The long-awaited return of Darth Maul 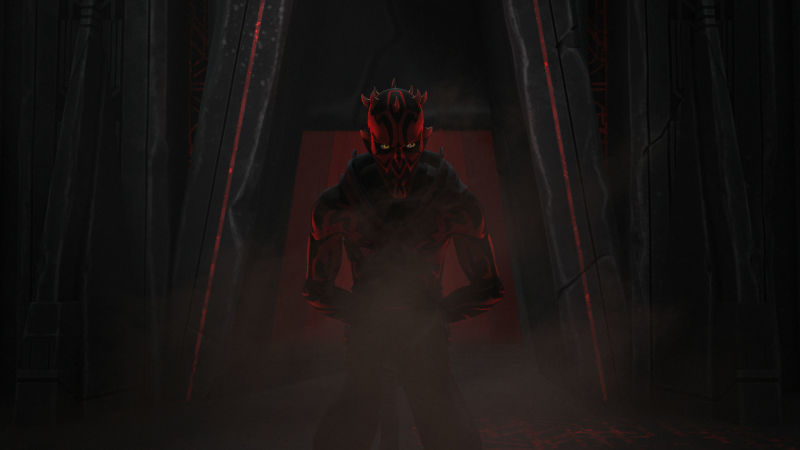 Fans not familiar with the animated universe of Star Wars may not even know that Darth Maul survived his encounter with Qui-Gon and Obi Wan in The Phantom Menace. The Clone Wars though built on Maul’s back-story, giving us some context about his origin, his brother Savage Opress, and his eventual downfall at the hands of Palpatine himself. As it turns out, Maul survived even that, biding his time in the depths of an ancient Sith temple on Malachor. Rebels shows us a villain just as terrifying and formidable as he’s always been, and according to showrunner Dave Filoni, “you will see more of Maul” in future episodes.

4. A brief nod to The Force Awakens 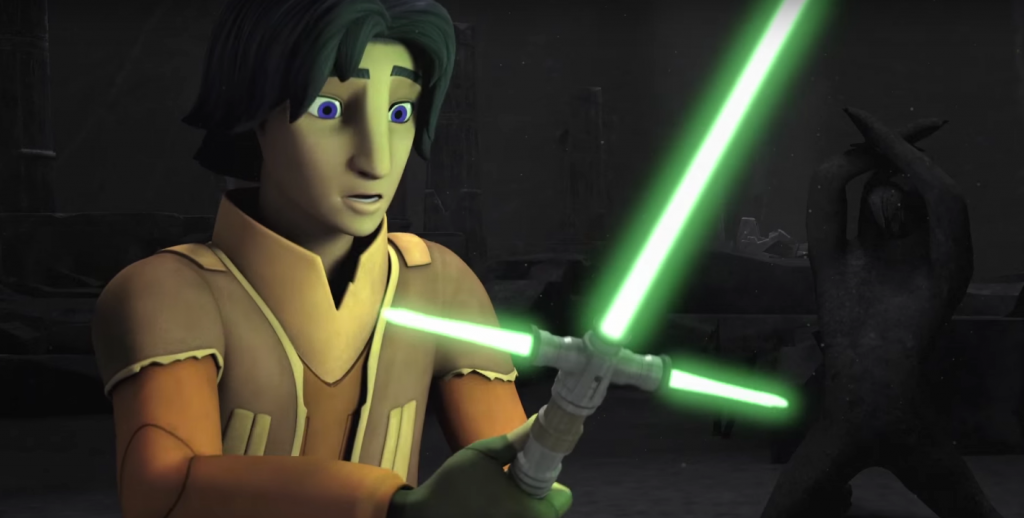 Kylo Ren’s crossguard lightsaber has been the butt of jokes ever since it first surfaced in the initial Force Awakens teaser. The origin of that design though didn’t originate with Ren, instead dating all the way back to the early days of the Jedi Order. Thousands of years ago, the crossguard saber was standard issue for most Knights, evidenced by Ezra stumbling upon one on an ancient battlefield inside a Sith temple. That scene wasn’t in the least bit coincidental either, confirmed by Dave Filoni in an interview with io9 as a subtle nod to The Force Awakens.

5. The end of the Inquisitors 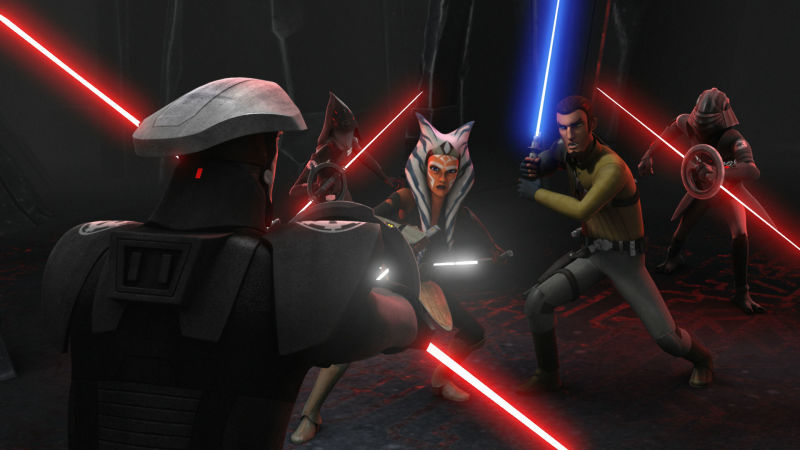 Rebels is largely a show deriving its story content from existing Star Wars canon. One new addition to that canon though has been the existence of the Inquisitors, a Force-wielding order tasked by the Empire with the hunting down of what remains of the Jedi. We already learned in recent episodes that the Grand Inquisitor from Season 1 (voiced by Jason Isaacs) was a former Jedi Temple guard, turned to the Dark Side following the fall of the Republic. Season 2’s finale gives us the answer to a bigger question though: Where are the Inquisitors in the original trilogy? We see three of them fall to the likes of Ahsoka, Kanan, and Darth Maul, a small part of the show’s eventual goal of phasing them out completely, as a way of explaining their absence from the movies. 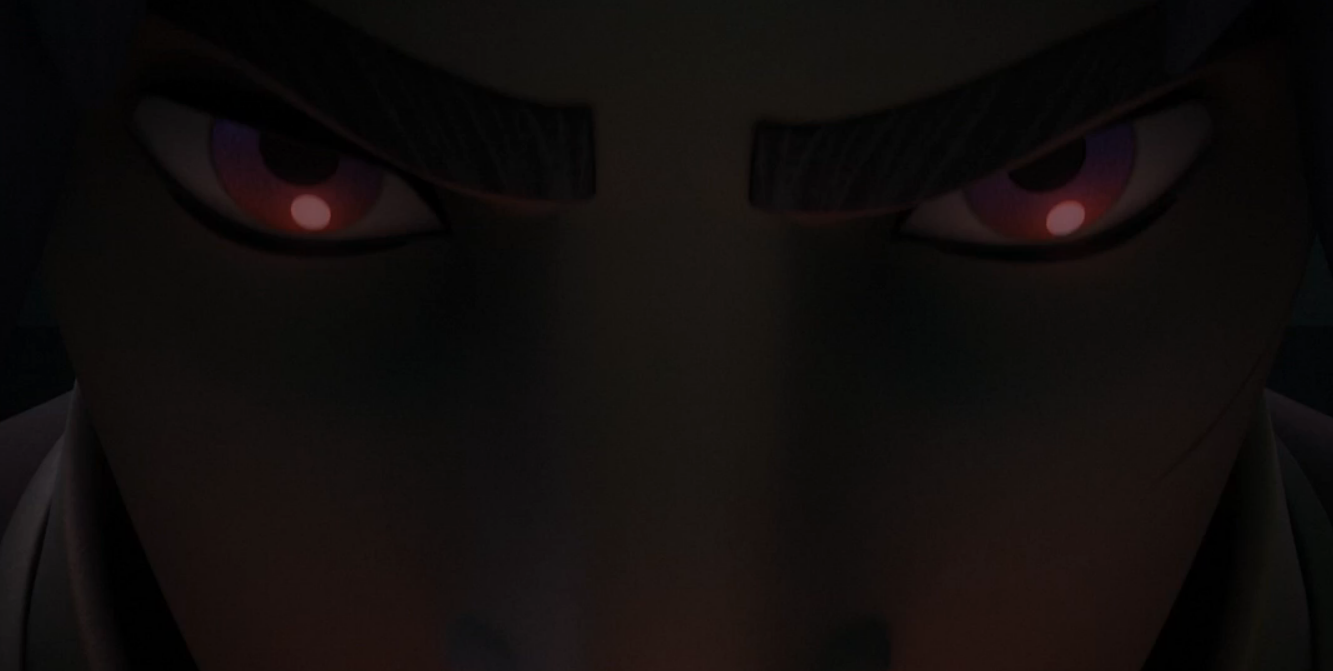 Every Jedi we’ve seen in the main canon of Star Wars has dealt with the temptation of the Dark Side in some capacity. Soon, it looks like we may be seeing Ezra’s own internal struggle take shape. The main arc of the finale has our heroes tracking down a holocron allegedly holding key information about how to defeat the Sith. The one catch though is that you need to be a Sith in order to open it. In the final moments of the episode, we see the holocron open for Ezra, ending with a brief look at his furrowed brow and ominously red eyes. Could Ezra’s own absence from the original trilogy be explained by a turn to the Dark Side? If the Season 2 finale is any evidence, it looks likely.